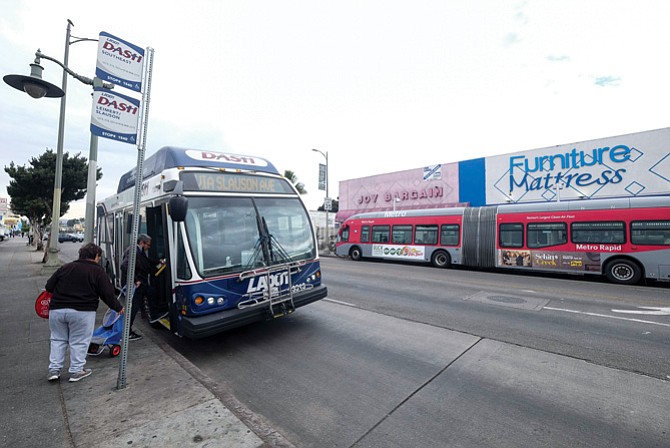 L.A. engineering giant Aecom is hoping that a plan to speed up the timeline on a proposed bus lane along the busy Vermont Avenue corridor will help it win the potentially $400-plus million project.

Aecom teamed up with London-based John Laing Group to submit an unsolicited proposal last month to the Los Angeles County Metropolitan Transportation Authority. The plan calls for private financing to complete the dedicated bus lane several years ahead of the scheduled time frame.

The bus lane, estimated to cost $425 million, would extend 12.5 miles on a stretch of Vermont from the Red Line subway station on Hollywood Boulevard in East Hollywood to just south of the Green Line light rail station at the 105 Freeway.

The MTA’s previous plan estimated finishing the project between 2028 and 2030, but the Aecom/John Laing proposal would shave “several years” off that timetable, said Stephen Polechronis, Aecom’s senior vice president for transportation for the Southern California and Nevada region.

“It is safe to say this proposal calls for the project to be completed well before the 2028 Summer Olympics,” Polechronis said.

The highly-used Vermont Avenue stretch has long been targeted for a dedicated bus or rail line. The corridor is the second busiest bus route in Los Angeles with 45,000 weekday bus boardings, behind only Wilshire Boulevard.

Aecom and John Laing propose shortening the timetable by privately financing the project through a public-private partnership. MTA would provide an initial $25 million, private financing would cover the rest, and the public agency would eventually pay off the investors with a return.

John Laing specializes in putting together financing packages for public-private partnerships on infrastructure.

Public-private financing agreements have become principal tools for the MTA to fast-track major capital projects. The agency has received about 90 such proposals – all still under consideration – on various projects throughout its countywide service area in the past two years.

Aecom’s Polechronis said the company chose this the public-private-partnership proposal because, “the demand on Vermont is extraordinary and there is a tremendous need and tremendous desire on the part of (the MTA) to move this project forward.”

He also said the proposal would use “creative private financing” and technology similar to that found in autonomous vehicles to both shorten the time to finish the work and keep costs in check.

MTA has earmarked the initial $25 million from Measure M, the half-cent sales tax increase approved by voters in 2016, for the project, but the remaining $400 million needs to come from federal, state and local funding sources not yet identified.

The Aecom-John Laing proposal is the only one so far on the Vermont Avenue bus lane, according to Joshua Schank, the MTA’s chief innovation officer.

Schank said Aecom/John Laing’s proposal is under review, and that the agency will decide next month whether to ask for more details. It would still be several months before the agency decides whether to put the project out to bid for a public-private partnership, and an environmental review would be required, leaving construction at least two years off.

Details of the Aecom/Laing proposal will remain confidential until the formal bidding process. “We do not want to tip off likely future competitors about what our proposal entails,” he said.

The MTA has put forward four options of how to incorporate a dedicated bus lane, including removing curbside parking for all or part of the time to make room for the lane, or converting an existing traffic lane to a bus lane, with two other variations.

But hundreds of small businesses on both sides of Vermont Avenue are at risk of losing foot traffic and revenue, said Damien Goodmon, executive director of the Crenshaw Subway Coalition, which has been trying for three years to get a subway along Vermont. He said the bus lane idea is wrong.

Businesses along the routes’ northern half would be most affected because the road there has only two lanes in each direction and narrow sidewalks, Goodmon said.

“On that northern part, where the need is greatest for mass transit, there’s no room to put a dedicated bus lane without either taking away street parking for businesses or making Vermont a one-lane street that would be virtually impassable,” Goodmon explained. “That would totally devastate the small businesses.”

But the southern half of the route, which has three lanes in each direction and frontage roads on each side, has room for a dedicated bus lane but insufficient demand. “The buses on that stretch are rarely full,” he said.