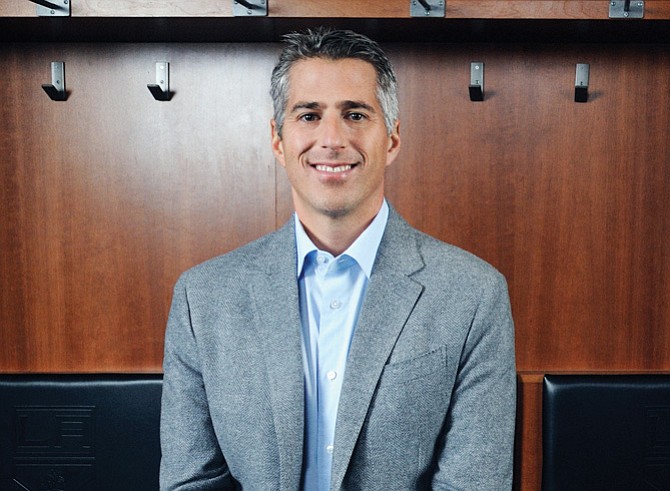 CASEY WASSERMAN is a throwback to old-style philanthropists even as he focuses intensely on the future.

Wasserman – the agency – also represents stars in up-and-coming sports such as snowboarding and skateboarding.

Yet Wasserman – the man – has used connections and his time to advance the cause of Los Angeles landing the 2028 Summer Olympics, the city’s third go as host of the quadrennial gathering.

He has served as Los Angeles 2028 chairman – an unpaid volunteer position – at the request of Mayor Eric Garcetti.

Both men count the 1984 Summer Olympics as a formative experience, and Wasserman said he sees his work on the 2028 games as a way of giving back to his home city.

His maternal grandfather, legendary Hollywood executive Lew Wasserman, took him to the 1984 Olympics (The city first hosted the Olympics in 1932.)

34 years later there is a sense of history – of bowing to the past, but not being bound by it – that helps drive the sports entrepreneur.

Today’s sports team owner has a lot more to think about than box scores and bottom lines, said Wasserman, who knows a thing or two about the trials and tribulations that can go with a franchise. He owned the Los Angeles Avengers of the Arena Football League until the franchise folded in 2009.

The landscape world has changed dramatically since then, with franchise values soaring for major leagues, and sports such as soccer, esports and mixed martial arts growing substantial fan bases.

“What all these owners have realized is that sports is a big business, and those businesses compete with all sorts of businesses that aren’t sports related, and [they] require capital expenditures and support that make those best-in-class opportunities,” Wasserman said.

There is no shortage of sporting arenas and stadiums sprinkled around Los Angeles County. They’re often cited as a major advantage for Los Angeles in terms of wooing the International Olympic Committee.

Yet such boosterish arguments ignore significant flaws, he noted.

Dodger Stadium is a gem nestled in Chavez Ravine – and it’s where Wasserman personally witnessed Kirk Gibson’s famous walk-off home run in Game 1 of the 1988 World Series. But it’s also the third-oldest stadium in Major League Baseball, behind Boston’s Fenway Park and Chicago’s Wrigley Field, each of which was built more than a century ago.

Instead, Wasserman said the secret to the city’s Olympic success can be boiled down to two collegiate rivals – USC and his alma mater, UCLA. In order to attract top-notch athletic talent from all over the world, both universities have had to continuously step up their games in terms of the quality of their facilities.

“No city in the world has two universities of that level of reputation and quality with that scale of student population, with that caliber of athletic programs in the city center within 10 miles of each other,” Wasserman said.

The local landscape took a significant step in building its base of world-class facilities nearly two decades ago, with the construction of Staples Center, the Avengers’ former home, which helped transform a tired area of downtown Los Angeles into a vibrant, go-to destination, he said. It also had the modern amenities lacking at the time in The Forum, then home to the Lakers and Kings, and the Los Angeles Memorial Sports Arena, the now-demolished venue that hosted the 1960 Democratic National Convention and also was the Clippers’ home.

Credit for that revival belongs to a Denver-based businessman and a subsidiary of his company, Anschutz Corp.

“Phil Anschutz and AEG really started the trend and it continued from there,” Wasserman said.

These next step will come with the completion of the $350 million, 22,000-seat Banc of California Stadium, which is set to open in April as home to Los Angeles Football Club, a new soccer franchise.

Another two years will see the addition of the Los Angeles Stadium & Entertainment District, a $2.6 billion project being developed by Stan Kroenke as the home field for his Los Angeles Rams and Los Angeles Chargers as a tenant. The stadium is already slated to host the 2022 Super Bowl, the 2023 college football national championship game and play a role in the 2028 Olympics.

Another continuing trend is the smartphone revolution, which has brought challenges to sports owners in markets both large and small. Smartphones have given sports fans the opportunity to be more connected to their favorite teams than ever, but they also carry myriad distractions.

Indeed, the oft-uttered stereotype of Angelenos as blasé sports enthusiasts who arrive to games late and leave early – if they can be bothered to attend games at all – is increasingly out of date, he noted.

“In the world we live in, the size of your city doesn’t correlate to the amount of distractions there are,” Wasserman said. “Most of the distraction sits in the palm of your hand. That’s universal.”

Looking ahead to the future of the sporting experience, team owners and executives may look to learn more about the consuming habits and patterns of the people buying tickets to sporting events.