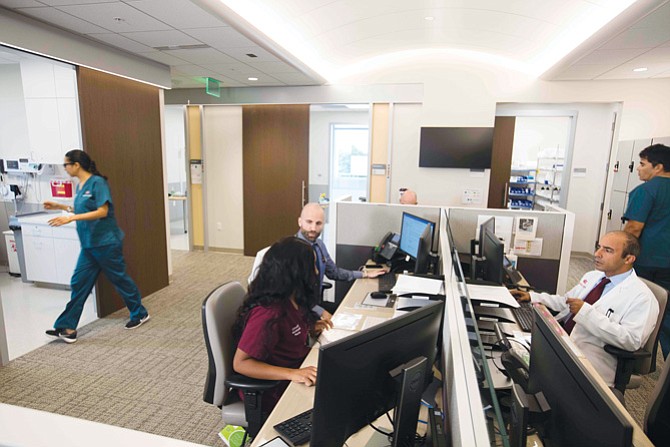 2018 might mark a major year for Los Angeles County’s effort to anchor and retain new biotechnology firms, using a mix of planning support and public dollars.

A county bioscience cluster initiative, drawn from two recent studies on how to expand the region’s $40 billion industry, aims to create business ecosystems that support biotech innovators. The initiative aims to nurture entrepreneurs by providing access to lab space and venture capital, something the region hasn’t done as well as places such as San Francisco or San Diego.

The headliner in the effort is a new development on LA BioMed’s 15-acre biotech park on the campus of Harbor-UCLA Medical Center, which the county Board of Supervisors is expected to approve this month.

The proposed 250,000-square-foot park for early stage and mid-size companies would be built and financed by a private developer in phases between 2020 and 2032 at an estimated cost of $200 million.

A $63 million, 78,000-square-foot LA BioMed research lab and incubator, supported by $3 million in county funds, is already under construction and expected to open next year in a different part of the campus.

LA Biomed isn’t the only outfit getting public support. The $12 million, 20,000-square-foot L.A. BioSpace Incubator at California State University Los Angeles has received $6 million in county and federal funds, and is slated to open this fall. The facility is expected to house two dozen start-ups.

The incubator will anchor LA Bioscience Hub, a nonprofit agency launched in 2014 to attract biotech businesses along a 4-mile industrial corridor from Cal State L.A. in El Sereno to the USC Health Sciences campus in Boyle Heights.

L.A. County has also earmarked 100,000-square-feet for bioscience at a renovated MLK Medical Campus in South Los Angeles, where the new MLK Health and Wellness Community Development Corp. will manage and lease out office space.

To help fuel early stage biotech companies, the county is trying to set up a bioscience investment fund of roughly $50 million this summer. The county plans to contribute $15 million, which it hopes will be matched 2-to-1 by private venture capital. The revolving loan fund is expected to be available this fall for emerging biotech businesses.

The proliferation of biotech development is also creating jobs in the public sector: the county intends to create a nonprofit agency this summer to oversee infrastructure projects, promote industry growth and manage resources.

When Cedars-Sinai opens its 13th outpatient clinic in Culver City late this month, it will feature a new design aimed to calm patients and reduce physician burnout.

The new 5,500-square-foot primary care office will take the doctors out of their traditional offices and put them in a pod with their assistants just outside patient exam rooms.

The redesigned clinics will cut down on physician fatigue by reducing paperwork and other menial tasks, according to the Beverly Grove-based health system.

“Physician burnout is a real problem, a big problem, and it takes a heroic effort to support,” said Dr. Christopher R. Fitzgerald, an internal medicine physician who practices at the redesigned Cedars-Sinai outpatient office at Wilshire and Robertson boulevards, in a statement. “I am honored to work with a health system that cares just as much about physicians as we do about our patients.”

The highest rate of physician fatigue occurs while practicing in front-line health care fields such as family medicine, according to recent studies, with physician burnout rates rising from 45 percent to 54 percent between 2011 and 2014.

Physician burnout, as defined by researchers, is measured by emotional exhaustion and a loss of empathy for patients among doctors.

A Mayo Clinic study, which documented the recent rise in burnout, said mid-career doctors were least satisfied with their specialty and their work-life balance, had the highest burnout rates and were more than twice as likely to plan to quit medicine for reasons other than retirement.

To combat it, Cedars-Sinai architects came up with a doc-in-a-pod design that debuted this summer at the flagship outpatient office on Wilshire. Two office floors were redesigned so that every interaction between clinicians and patients saves time – and aggravation.

2018 brought new leadership to a couple of Los Angeles-based entities in the biotech sector – a 28-year-old for-profit and a new nonprofit.

Staff Reporter Dana Bartholomew can be reached at dbartholomew@labusinessjournal.com or (323) 556-8333.