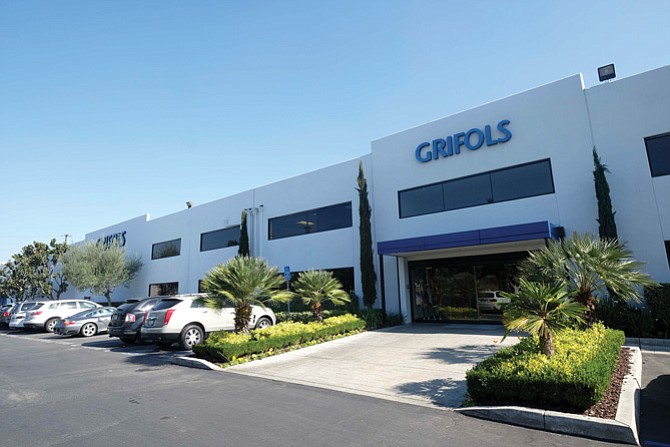 A contingent of technicians monitors rows of glass vials that inch down an automated assembly line at Grifols Biologicals Inc. in El Sereno, each filled with a plasma-derived protein used to bolster the body’s immune system and fight off infection.

Expect more of the same in the quiet district just east of downtown, where the Barcelona, Spain-based company plans to open another 24-hour assembly line that could double production for Gamunex, its signature drug for the treatment of an immunodeficiency disorder.

“As we increase our Gamunex and albumin production levels, we’ll be hiring additional folks over the next few years,” said Willie Zuniga, chief executive of Grifols Biologicals, who grew up in El Sereno. “We’re looking at hiring between 50 and 100 (more) people, a majority of them manufacturing technicians.”

Grifols Biologicals, the manufacturing arm of biotech giant Grifols S.A., is among three of the company’s subsidiaries spread across a hill at northern end of the 710 Freeway. The 36-acre campus also serves as Grifols U.S. headquarters. Executives there oversee operations ranging from the Grifols Plasma Organization, with 190 plasma donor centers across the U.S., to the Grifols Shared Services North America Inc., which runs IT and human resources and support services nationwide.

Grifols has grown its L.A. County operations steadily in recent years, and is among the largest drug makers in the area by employment, according to the Business Journal’s 2017 list of bio science companies.

The best-known drug maker in the area is Amgen Inc., one of the largest employers in Ventura County, with an estimated 5,500 workers at its operations in Thousand Oaks, just over the L.A. County boundary. Santa Monica-based Kite Pharma, a unit of Gilead Sciences Inc., also employs about 800.

Shire, a Dublin-based competitor to Griofols, has a plant in Atwater Village that employs 1,900.

Grifols’ growth has come with $350 million of investments into its L.A. operations. The company’s L.A. workforce has ballooned from less than 400 employees who worked at a troubled El Sereno plasma medicine company it acquired 15 years ago to 1,600 across the county – three quarters of them in El Sereno.

Many workers — from manufacturing techs who start at $17 an hour to the bioscientists who make $140,000 a year – were hired from local high schools, community colleges and nearby California State University Los Angeles.

“Grifols demonstrates the bioscience industry’s potential to provide more Angelenos with jobs that can support their families,” said county Supervisor Mark Ridley-Thomas, who has advocated for the biosciences industry, in a statement. “Grifols’ longstanding partnerships with community colleges, universities such as Los Angeles Trade Technical College and Cal State L.A., and the Los Angeles Unified School District, is a model for training a workforce with a range of skill levels for an industry sector that is poised for rapid growth.”

The 77-year-old family-owned Grifols firm got a foothold in L.A. in 2003, when it acquired Alpha Therapeutic Corp. of El Sereno from Mitsubishi Pharma Inc. The deal was one of a series of acquisitions from U.S. biomedical companies, including a $4 billion purchase in 2011 of Talecris Biotherapeutics Inc. in North Carolina; the $1.7 billion acquisition in 2013 of a blood transfusion diagnostics unit of Novartis AG in Emeryville, and a $1.9 billion deal last year of a blood screening unit of Hologic Inc. in San Diego.

Alpha Therapeutic, whose roots date back to 1947, was in dire need of a manufacturing makeover. The maker of plasma-derived therapies for rare chronic conditions from clotting factors for hemophilia to albumin used in burn victims, had not invested much in its aging plant, Gregory G. Rich, chief executive of Grifols Shared Services and former head of U.S. Grifols operations, who had previously worked for Alpha.

In addition, the company sold to Grifols was under a Food and Drug Administration consent decree to correct manufacturing violations that could threaten patient safety.

“Clearly, it was a company that had lots of issues, had suffered significantly with product quality associated with FDA sanctions, a consent decree. And basically, a lack of investment, in overall structure and facilities,” said Rich. “By the time we had acquired the plant, basically the issues had been resolved. But it was time really to begin to invest – first in the manufacturing facility, subsequently in the support and office facilities.”

Company officials said Grifols decided to invest in Los Angeles because its longtime roots in the region. It tore down old buildings, gutted others, added controlled temperature warehouses and built two buildings to house $70 million in new manufacturing equipment.

It now employs 900 workers who have since boosted production of its blood plasma-derived drugs – doubling the capacity of Gamunex, an immunoglobulin intravenous therapy, while tripling the capacity for albumin, a plasma volume expander – to meet growing international market demand.