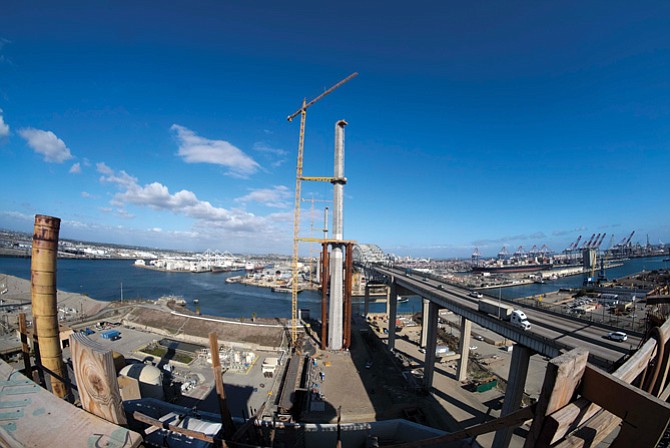 he $1.5 billion Gerald Desmond Bridge is already transforming the skyline of Long Beach – and it won’t even open until next year.

The structure features two towers soaring 515 feet above the Port of Long Beach, supporting a deck that’s 50 feet higher and a half-mile longer than the bridge it will replace.

It’s rising alongside the aging original, which was constructed in 1968 to link the port’s Terminal Island with downtown Long Beach and the 710 Freeway.

“We call this the ‘Bridge to Everywhere’ because of the critical importance it has to the efficient movement of cargo not only at the port, but to the rest of the nation,” said Mario Cordero, executive director of the Port of Long Beach.

The bridge showed evidence as early as the 1990s it might not survive beyond its 40- to 50-year lifespan. Concrete chunks began falling off in the early 2000s.

Port of Long Beach officials installed netting under the bridge, and long-term plans got underway for its replacement. There were some delays in funding and design changes before the project started construction in January 2013.

Some surprises popped up – old oil field equipment found in harbor bottom, for example – that pushed construction costs $300 million over the original $1.2 billion budget and delayed the completion date.

But there is new technology, too, which helps speed up the process – a mobile scaffolding system that workers easily and quickly move as bridge segments are completed.

The new Gerald Desmond bridge will be better able to withstand earthquakes, according to port officials, and accommodate the taller and larger Panamax shipping container vessels docking at the port. It will be the tallest cable-stayed bridge in the nation, a type of construction generally cheaper and more rigid than suspension bridges.