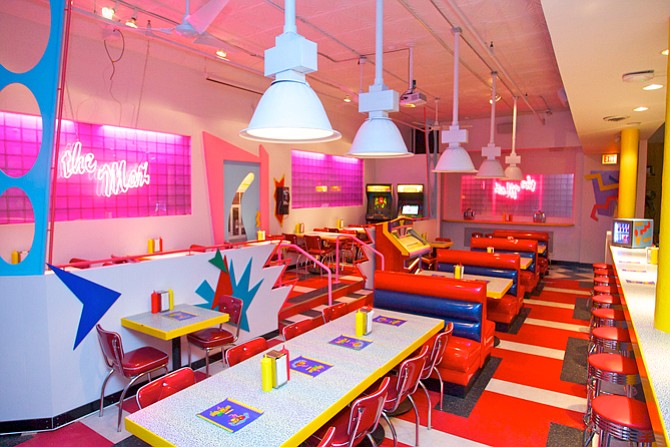 Saved By the Max eatery, inspired by the 1990s-era TV sitcom "Saved by the Bell".

The potential to tap into the appetite of a built-in fan base has restaurateurs striking deals for film- and television-themed offerings.

In May, a restaurant recreating the diner from the 1990s-era TV sitcom “Saved by the Bell” is slated to open in Hollywood.

The Saved by the Bell concept got off to a hot start in Chicago, where it recently concluded a nine-month run. It goes by Saved by the Max, a reference to the diner that figured prominently in the show.

The eatery will be in a 5,600-square-foot space in the Hollywood Gateway shopping center, with a two-year lease in hand.

Saved by the Max will have company in the L.A. market.

The Scum & Villainy Cantina, a pop-up bar on Hollywood Boulevard inspired by the famous bar scenes in the “Star Wars” movie series, was so successful that its owners have extended its two-month run indefinitely.

An “Austin Powers” bar is expected to debut in Glendale next month. It’s the latest movie-themed bar by East Coast restaurateur Zach Neil. He also has obtained licenses to Quentin Tarantino hits “Kill Bill” and “Pulp Fiction” and plans to open other restaurants based on those films.

Neil already has opened several movie-themed bars in Los Angeles and in a handful of other cities through his company New Gold Empire.

Fans of movies and TV shows have already created a strong market for movie or TV series memorabilia, conventions, costumes and other items.

That means there’s a built-in audience for the restaurants as the next phase, and one of the reasons for their success, said restaurateur J.C. Reifenberg.

He made enough money – more than $800,000 – from pre-selling tickets to help fund opening the Scum & Villainy Cantina last year. Fans paid $50 to $75 for two hours in the bar and two cocktails.

“Being such a ‘Star Wars’ and sci-fi geek, I know that no matter what convention you go to, you have twice the amount of fun and build all the memories at the bar after the convention,” Reifenberg said. “These types of people are used to waiting in line; it’s where you meet new friends.”

The popularity of such venues also stems, in part, from the demand for unique experiences in retail and restaurants, said Gabe Kadosh, vice president of retail services at Colliers International.

Kadosh arranged the lease for the friends opening the “Saved by the Bell”-themed eatery. Saved by the Max had a sold-out, nine-month run in Chicago where its owners were based, so the group decided to move the concept to Los Angeles.

Hollywood was a more-natural location, said partner Derek Berry. The television show cast lives here, so the actors are now scheduled to appear at the restaurant. And Los Angeles is the setting for the show.

“A lot of people travel to Los Angeles,” Berry said. “There’s a lot of international tourists, and there’s the population here.”

The group, which got the rights to the show from NBC/Universal, signed a two-year lease for a 150-seat restaurant space.

Saved by the Max has started selling tickets, including dinner to the eatery for $40 each.

Owners wanting to name an eatery after a movie or TV show have to license the name, and such deals are an easy revenue stream for traditional media companies struggling against streaming competitors such as Netflix Inc., said Neil, the East Coast restaurateur, whose themed eateries include Beetle House, a restaurant based on the film “Beetlejuice,” and the Darkside, a bar based on Walt Disney Co.’s “Star Wars.” Both opened in Hollywood last year.

“They’re monetizing a business they’ve never been in,” he said. “Movie companies don’t do anything with food and beverage; it’s not their business.”