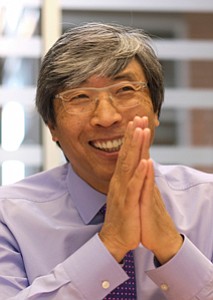 The Washington Post broke the news Feb. 6 that a sale was close. On Feb. 7, Justin Dearborn, chief executive of Chicago-based Tronc Inc., said in a memo addressed to Tronc colleagues that Soon-Shiong had agreed to acquire the properties for $500 million in cash plus the assumption of $90 million in pension liabilities.

Media watchers have compared the sale to the 2013 purchase of the Washington Post by Amazon Inc. chief executive Jeff Bezos. In this case, the sale price is double the $250 million Bezos paid for the Post.

“This transaction will allow us to fully repay our outstanding debt, significantly lower our existing pension liabilities, and have a substantial cash position following the close of the transaction,” Dearborn said in the statement.

In the wake of the news, Tronc shares rose 24 percent on Feb. 7 in early trading. The company has a market cap of nearly $750 million.

Tronc also said on Feb. 7 that Times Publisher and Chief Executive Ross Levinsohn, who has been on unpaid leave since Jan. 19, has been cleared of wrongdoing and will remain with Tronc as chief executive of Tribune Interactive, a business unit that Tronc plans to form following the sale.

Levinsohn’s leave of absence commenced after a National Public Radio report that he was a defendant in two sexual harassment lawsuits.