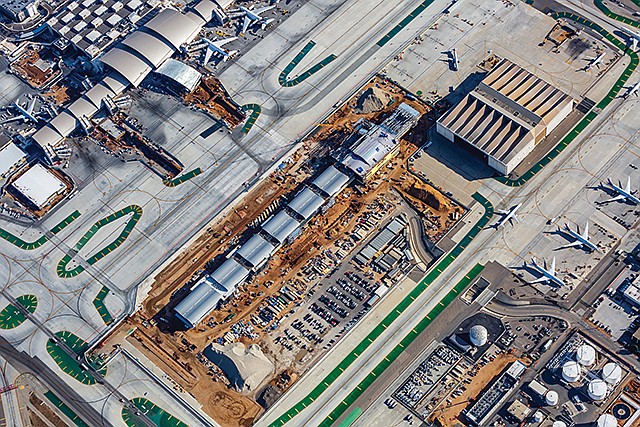 Ground Control: An aerial shot from November of the construction underway at LAX.

2018 will go down as the year the long-debated overhaul of Los Angeles International Airport finally became reality as scores of design and construction contractors reaped more than $11 billion from new contracts and construction starts.

This unprecedented surge in construction contracts and work is all part of the $14 billion modernization program at the nation’s second-busiest airport. The work is designed to upgrade, over the next five years, the passenger experience at terminals and ease access into and out of the notoriously congested facility.

“This is the year we set in stone the advanced future of LAX because of the number and scope of contracts we awarded,” said Deborah Flint, chief executive of Los Angeles World Airports, the city agency that operates the airport. “What we’re doing at LAX is not just about the dollars, but it’s about changing the passenger experience and changing the way megaprojects are evolving with the private sector.”

The rapid project rollout is a boon for scores of private-sector contractors, both in Los Angeles and around the globe.

Take downtown-based design firm AC Martin Partners Inc., which has three contracts related to the LAX modernization: work on two terminal renovations and a planned consolidated rental car facility. Taken together, these are the largest infrastructure contracts in the 112-year-old firm’s history; the company now has a dedicated staff of at least a dozen people at the airport.

“The huge size of this public infrastructure project and the amount of work we are doing on it are both unprecedented,” said Bob Newsom, president of AC Martin. “A chance like this doesn’t come around very often.”

Another local company reaping the benefits of all the work at LAX is Century City-based engineering and construction giant AECOM, which has contracts on two terminal projects: a new, mostly international terminal rising on the airfield behind the Tom Bradley International Terminal and a project to expand the front facades of several terminals to ease connections to a planned people mover.

All of this work is the result of the convergence this past year of two massive modernization programs at LAX. One program encompasses major terminal renovations and the building of new terminal structures. The other program involves the building of a people mover – an above-ground railcar system – a consolidated rental car facility and other infrastructure designed to increase options for getting into and out of the airport.

“No other airport in the U.S. is attempting anything this massive,” said Michael Boyd, president of Boyd Group International Inc., a Denver aviation consulting firm.

Boyd said LaGuardia Airport in New York is the only U.S. airport undergoing a similar multipronged renovation, but since that airport is smaller, the project tab is around $8 billion, compared to $14 billion at LAX.

The LAX terminal work has been building over the last several years, including the start last year of the $1.6 billion Midfield Satellite Concourse behind the Bradley Terminal that will add 12 gates and handle mostly international flights. 2017 also saw the start of the $516 million renovation by Dallas-based Southwest Airlines Co. of Terminal 1 and a new related terminal structure between the current Terminals 1 and 2. Southwest’s Terminal 1 renovation finished last month.

Also last year, in a project led by Delta Air Lines Inc., more than 20 airlines switched terminals to allow Delta to move into Terminals 2 and 3 from Terminals 5 and 6. This laid the groundwork for the Atlanta-based carrier’s launch of a $1.9 billion terminal renovation project in February.

“We are engaged with our airport partners in over $12 billion in airport improvements across our hubs network, including here in LA,” Mary Loeffelholz, vice president of LAX corporate real estate for Delta, said in an emailed statement.

American Airlines Inc., of Fort Worth, Texas, began work two months ago on a $1.6 billion renovation of all of Terminal 4 and part of Terminal 5.

Greeley, Colo.-based Hensel Phelps Construction Co. Inc. is the general contractor on both of these billion-dollar-plus projects.

Los Angeles World Airports also awarded a $337 million contract in January to expand out the facades of three terminals and build new adjacent structures, all designed to ease access to the people mover project. Austin Commercial Inc., of Dallas, is the general contractor; both AC Martin and AECOM are also working on this project.

It is the other program to ease commuter access to the airport that really came together this year with the approval of two multibillion contracts and one other key contract.

“The LAX modernization project will offer connections to mass transit options, easing congestion in the central terminal area at LAX as well as the trip to and from the airport from downtown LA, the West side and South Bay,” Delta’s Loeffelholz said in her statement.

The centerpiece of the project is a $4.9 billion contract spread between seven prime contractors to design, build, operate and maintain an automated people mover connecting the terminals to a Metro rail station and a consolidated rental car facility. Irving, Texas-based Fluor Corp. and Broomfield Colo.-based Flatiron Construction Corp. are the main construction contractors, while Berlin-based Bombardier Transportation will supply the rail cars. The construction cost of the 2-mile route is estimated at $2 billion.

The other major component is the rental car facility to be built at the eastern end of the people mover route, next to the 405 Freeway. It will consolidate operations of more than a dozen rental car companies that are now scattered throughout Westchester, El Segundo and other communities near the airport.

A consortium of 11 companies, led by general contractor PCL Construction Services Inc., of Denver, were awarded $2 billion to build, operate and maintain the consolidated rental car facility. AC Martin Partners is the major local company in the consortium. The construction costs alone are estimated at around $1 billion.

The city over the summer approved another part of the access plan: a $209 million, five-level parking structure adjoining a people mover station that will allow airport travelers to park away from the congested terminal loop and then hop on the people mover for a five-minute ride to the terminals. San Francisco-based Swinerton Builders Inc. is the general contractor on this project. 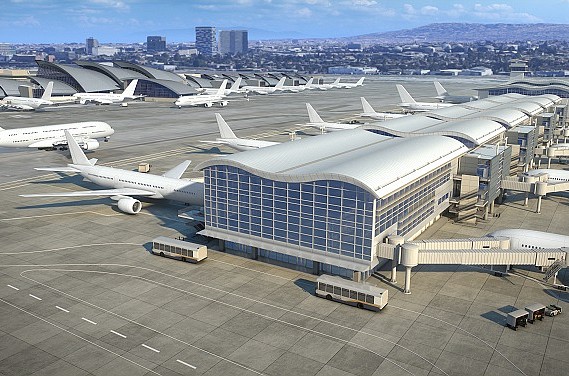 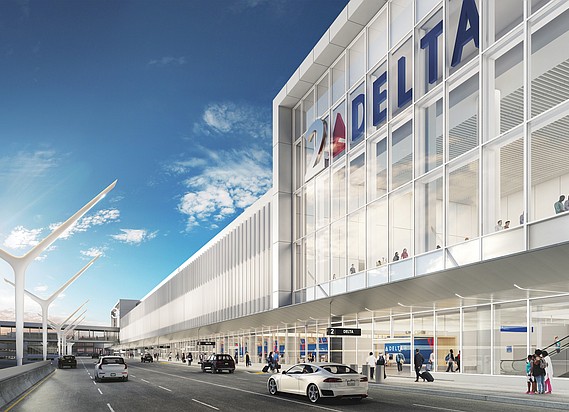 Renovation of all of Terminal 3 and presecurity

screening sections of Terminal 2, including a new centralized ticketing/screening lobby in the space between the terminals. 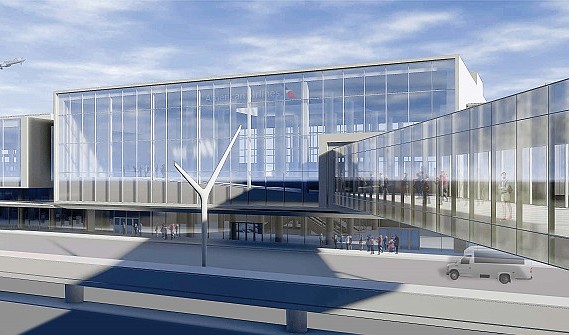 Renovation of Terminals 4 and 5, including new facade between the two terminals that will connect to the people mover, new and larger combined passenger check-in and baggage claim areas, and centralized security screening checkpoints. 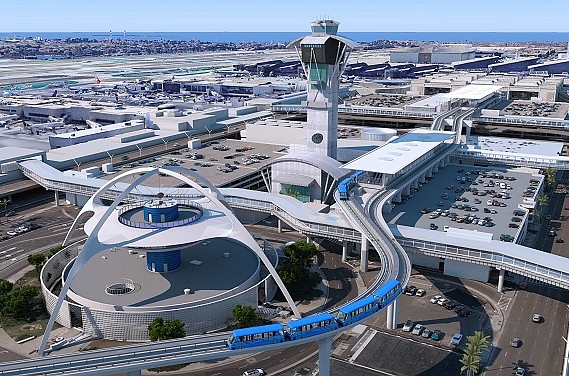 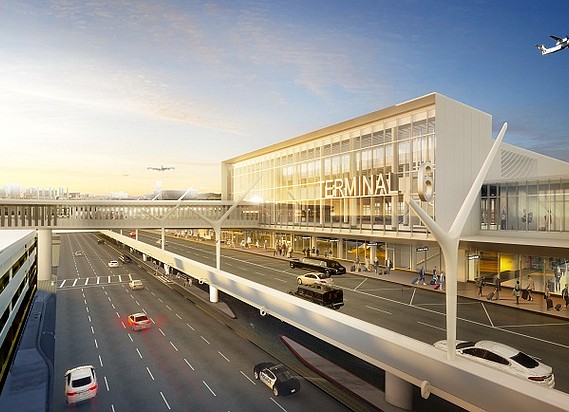 New or upgraded structures between Terminals 5 and 6, in front of Terminal 7 and next to Tom Bradley International Terminal to facilitate passenger movement between terminals and automated people mover. 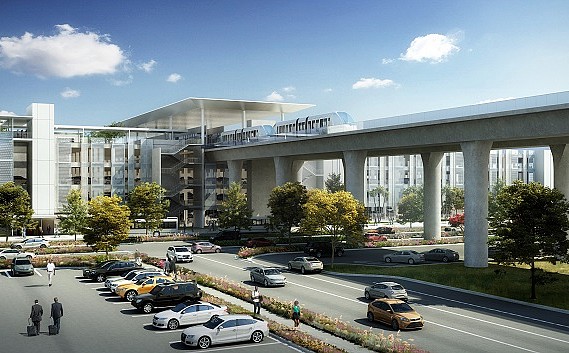 Facility to consolidate operations of more than a dozen rental car companies now scattered throughout airport-adjacent communities; located at eastern end of people mover route and near 405 Freeway.

Construction Cost: $1 billion, estimated (Contract is for $2 billion, including cost to operate and maintain.) 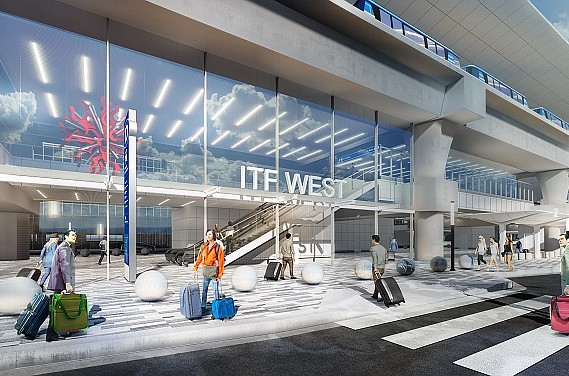