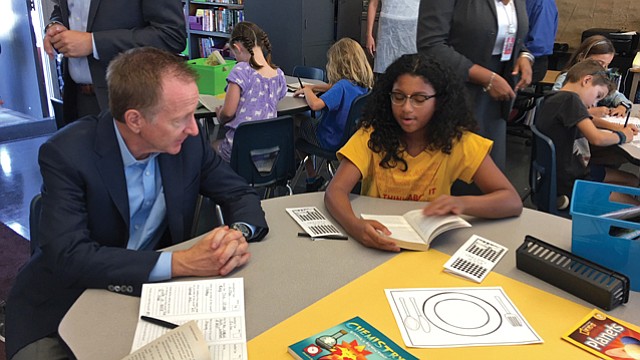 Austin Beutner’s duties as superintendent of the nation’s second-largest school district – with 700,000 students, roughly 1,000 schools and an $8.2 billion annual budget – mark the latest chapter in an ambitious civic resume. Beutner worked as a broadly empowered top deputy to Mayor Antonio Villaraigosa in the wake of the Great Recession. He later started and withdrew from a run for mayor of Los Angeles, and then served as publisher of the Los Angeles Times amid a wave of disruption that roiled the publication and print media in general. Beutner still isn’t signing up for the easy stuff – he now must guide the Los Angeles Unified School District through financial difficulties, including rapidly rising pension and retiree health insurance costs and drops in revenue due to declining enrollment. Negotiations with United Teachers of Los Angeles remained a point of contention as this issue went to press, with threats of a strike in the air. Beutner’s background gives him plenty to draw on as he confronts LAUSD’s fiscal challenges —he started his career at Blackstone Group in New York, and at age 29 became the firm’s youngest partner. He went on to play a key role in the U.S. government’s efforts to help Russia transition to a market economy after the collapse of the Soviet Union, and then co-founded a private equity firm now known as Evercore Inc. Beutner sat down with Business Journal Editor Jerry Sullivan and Reporter Howard Fine to discuss these challenges, and his vision for decentralizing control within the school district.

What should the Los Angeles Unified School District do to turn out students that businesses will want to hire?

The reason we do all this work at LAUSD is to give every kid a great foundation for a 21st century job, or a path to college graduation, or both. Today, roughly 12 out of every 100 students who enter our high schools will graduate from college. That’s not good enough. And in parts of the district, it’s considerably less than 12 percent. We must produce kids with the knowledge, proficiency, confidence and skills to be successful in life.

How does the district get there?

We get there by simplicity and focus – and transparency about where we are. We need an organization that starts with the student and builds from there, as opposed to starting with the center – district headquarters – with its bureaucracy and with rules, regulation and compliance emanating from the top. The resources at the center are better deployed in the individual schools.

So, we start with the student, with the great teacher in the classroom. Then we must surround them with an adequately resourced school – and not just with what the district can provide, but with what the whole community around the school can provide. This is the place where our intersection with the business community becomes really powerful.

How do you see the role of the business community?

The business community needs to enter the conversation much more so than it does now. And not just because of self-interest, where businesses want to make sure that our students come ready, willing and able to work for any employer in our community. There’s also a moral obligation. Those most active in the conversation today are the parents and other family members of some of those students, and the LAUSD workforce. Where is the business community? Not as engaged as they need to be. They should be present at every board meeting, at every school and when we are making value decisions about where our resources go.

You have called on school principals to become more entrepreneurial. Why summon such a huge cultural shift?

Any educator will tell you school leaders create the culture at each school – they work with families, students and teachers. Every great school has a great leader. The rest of us should be there to support those school leaders and those in the classrooms doing the work.

What should these school leaders change their schools into? What’s the end vision here of what schools should become?

Let’s look at something that’s narrow and an important foundation piece: attendance. We know that the person who knows the community, who understands the students in their school and the families of those students, is local – is involved at that school. If the student is not at school, the school leader will know or should know if there’s an issue with that student or that family. Maybe the student has asthma and needs to get a connection to her clinician to get a prescription filled. Or the student’s parents are no longer a family unit. Maybe there’s a need for counseling. That’s very different than an attendance leader at headquarters looking at data on a page from 1,000 schools and then sending out a robo-call to each family. That doesn’t do the work.

So we are realigning now: attendance counselors will no longer be headquarters-directed; they will be directed by individual schools they are assigned to. They should be visiting the households of absent students. That’s the cultural shift we’re talking about – starting from the school.

You announced the formation of the Fund for Equity and Excellence in July, starting with $3 million in donations from the Eli and Edyth Broad Foundation, among others. Why did you set up this fund? And what will its role be?

This fund gives us a little bit of discretionary money to help bring in expertise that we wouldn’t otherwise have the resources to do, either because of time, flexibility or cost. We have brought in two firms: Kitamba Inc. – which has done work for the New York schools – to help us figure out how to realign resources from the center to the schools; and Ernst & Young, to figure out how we can operate more efficiently to make our current dollars go further.

My hope is that we’ll add other foundation support, so that both the number of participants and the total amount of funds grow. During my opening-day school tour, I watched a wonderful guitar class at Walnut Middle School, which probably was established when a teacher who went online and figured out how to get extra grant money. I think of the fund as a platform to bring in more resources to each school that wants to have something like that guitar program.

Do you see this as being a substantial addition to the budget?

Realistically, this fund will operate at the margins to do things different, to find excellence, to better connect to the community that we don’t necessarily have the budget dollars to do or have the flexibility to do quickly or easily. And it’s a chance to try new programs or initiatives out at one or a few schools, see if they work and then scale up from there with district money. For example, we tried on a pilot basis to send out direct mailers to households where students had high absenteeism. We spent $140,000 or so on that and by the end of the program, we had brought in about $1.4 million in attendance-related state funding. So now, the district as a whole can look at this and say, “We can make this investment with confidence that it will work.”