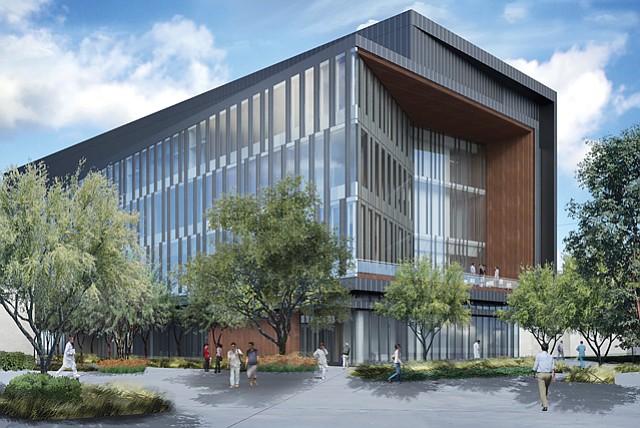 Rendering of Hub Near UCLA-Harbor: Institute has 400 researchers on staff at campus next to hospital.

The Torrance-based Los Angeles Biomedical Research Institute has sold $50 million in bonds to construct and equip a new building to serve as a research center and incubator for startup companies.

The 66-year-old nonprofit, known as LA Biomed, is affiliated academically with the David Geffen School of Medicine at UCLA and funded by government grants, industry and teaching contracts, royalties, and support from private donors and other foundations. It announced Aug. 28 it had closed on the sale of $49,835,000 series 2018 tax-exempt revenue bonds, issued by the California Health Facilities Financing Authority.

“We couldn’t be more pleased with the overwhelming positive response,” said David Meyer, chief executive of LA BioMed, in a statement. “The proceeds will help us create new innovation biomedical solutions with a new research building, biotech incubator and a campus that facilitates the bed-to-bench-to-bed cycle of innovation we have nurtured at LA BioMed.”

LA Biomed currently houses more than 400 scientists working on more than 600 research projects, including treatments for debilitating and fatal rare inherited diseases. It has launched 13 spin-off companies to date.

Demand for the institute’s first bond sale, led by Wells Fargo Securities, was more than twice the size of the original offering, the institute said.

The new funds will finance capital improvements at the 12-acre LA BioMed campus next to Harbor-UCLA Medical Center.

They include the construction and outfitting of a $63 million, four-story bioscience research building and 18,000-square-foot incubator for up to 30 new biotech firms slated to open in February 2019.