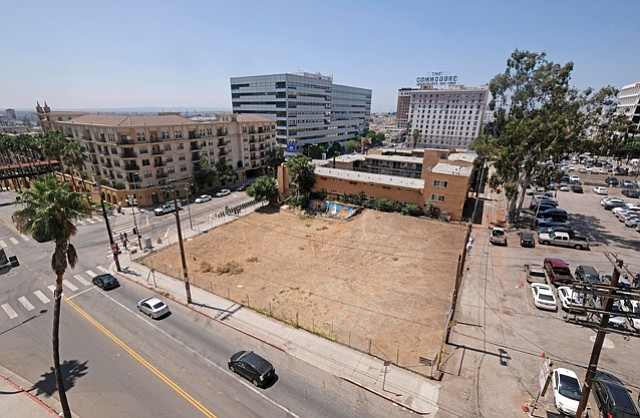 Downtown’s renaissance appears to be spilling into the heart of the gritty Westlake district – which runs west from the city’s center to Koreatown, bordered roughly by 3rd Street to the north and Olympic Boulevard to the south.

The current round of building downtown has been ongoing since the recovery from the Great Recession took hold, claiming development opportunities and sending apartment rents and condominium prices steadily upward.

“There is a shortage of where people can go and develop right now,” said Seth Grossman, a Century City-based senior managing director at Meridian Capital Group, a commercial real estate finance and advisory firm headquartered in New York.

Spillover has until recently extended only as far as a section of Westlake that hugs the 110 freeway, where several new residential projects have risen among office buildings that give the area a downtown feel.

Signs that the tight market is forcing a new view of some of Westlake’s more hardscrabble precincts can be seen on a three-block stretch of 7th Street that’s about halfway between the 110 and MacArthur Park.

• A 37-story multifamily project proposed on an L-shaped parcel on the northwest corner of 7th and Bixel streets by United American Properties of Newport Beach.

• A project that would bring 130 condominiums and 7,000 square feet of commercial space to a 0.8-acre parcel of land at 1145 W. 7th St. that’s owned by China-based Zhuguang Properties.

The 2.7-square-mile Westlake district is among the city’s most densely populated, with most of the housing stock currently occupied by working-class and poor tenants. It is home to large immigrant communities from Mexico and Central America, and is dotted with historic buildings dating from the 1920s and a few hip and relatively small residential outposts here and there.

Westlake remains a far cry, however, from drawing the scads of young professionals with relative high incomes and a desire to live in inner-city neighborhoods. That has been the basis of hot hipster markets from Silver Lake to Koreatown, not to mention standard high-end hubs such as Santa Monica, West Los Angeles and Beverly Hills.

Those areas have gotten expensive for most buyers and renters, though, and the overall market remains tight. The vacancy rate for apartments countywide is less than 4 percent, according to CoStar Group Inc.; the average monthly rent for a one-bedroom apartment in the city of Los Angeles is $2,068, according to RentCafe, a subsidiary of Santa Barbara-based Yardi Systems Inc., a real estate investment and property management software firm.

The market is tight for developers, too.

“The developers are desperate now for land,” said Sonny Astani, chairman of Astani Enterprises Inc., a Beverly Hills-based real estate development firm that’s done projects downtown and in area of Westlake closer to the 110, where his 218-unit Wilshire Valencia apartments at 1515 Wilshire Blvd. sold for more than $80 million last year.

“There is a demand for housing. We want to do housing that is affordable for a wide spectrum of people who have jobs and make money. Everybody knows these rents are crazy.”

Westlake has traditionally seen relatively high rates of street crime, and while there have been improvements on public safety in recent years, there remain challenges that are intertwined with development potential.

“The area is obviously has not quite been gentrified, partly because the businesses that exists there – 7-Eleven, liquor stores, old motels – the owners aren’t selling,” Astani said.

The bust of activity and interest on 7th Street in Westlake could be getting a boost from access to Los Angeles County Metropolitan Transportation Authority Red and Purple line trains at stations in downtown and MacArthur Park, essentially anchoring the east and west ends of the area.

“Everything around (Westlake) has become very popular,” said Dana Brody, senior vice president of capital markets at Jones Lang La Salle Inc. “Over time it makes sense to give moving farther into areas that meet that criteria.”

In a sign of the area’s growing popularity, Teragram Ballroom, a 600-person-capacity music venue, opened in 2015 at 1234 W. 7th St., and has drawn patrons via ride-sharing companies Uber Technologies Inc. and Lyft Inc.

The newly-renovated Mayfair Hotel should attract tourists, people visiting local universities or professionals on work visits, according to Astani.

“If you go three or four blocks beyond (the 7th Street developments) you have smaller parcels,” he said, noting it makes it more difficult to attract institutional lenders.