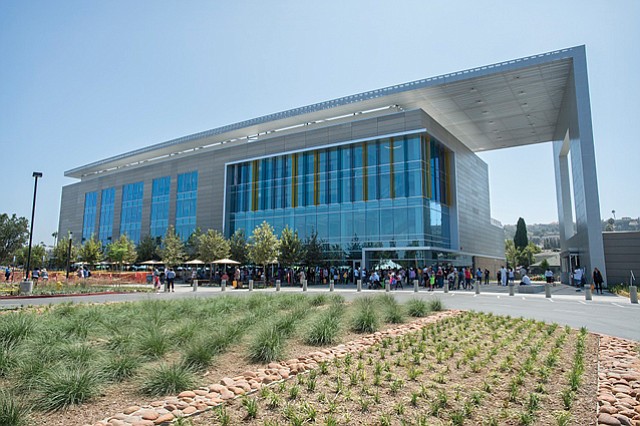 The largest employers in Los Angeles County added jobs at a modest pace over the past year according to a pair of Business Journal lists, with the private and public sectors roughly on par.

The 25 largest public employers on the Business Journal’s annual list, ranked by local employees, increased staff counts collectively by nearly 2,900 employees over the past 12 months.

The 0.7 percent increase came to nearly 404,000. That’s slightly better than the county’s overall public sector, a total that includes smaller entities and combined overall for a 0.3 percent drop in local jobs for a base of 552,500, according to state data.

Eleven public-sector employers reported a 1-plus percent growth in local employee counts, while four posted drops of more than 1 percent. The remainder had employee changes of less than 1 percent.

The Business Journal’s annual list of the 50 largest private employers, also ranked by L.A. County jobs, turned in a 1 percent increase. The 4,000 net gain in jobs gave the 50 outfits 391,000 workers combined. That slightly underperforms the 1.3 percent growth rate in L.A. County’s private sector overall, which totals about 3.9 million jobs, according to the state Employment Development Department.

The information on private employers offers an indication on the direction of employment patterns, but is not definitive. The list included 25 companies that did not respond; estimates of local employee numbers were kept flat for most of them, based on Business Journal research.

There was one newcomer to the private sector list: No. 21-ranked Space Exploration Technologies Corp., or SpaceX, with 6,000 employed in the county. It replaced Thousand Oaks’ biotech giant Amgen Inc., which had 5,600 employees on last year’s list but was removed based on the concentration of positions at its Ventura County headquarters.

The County of Los Angeles, with almost 110,000 employees and a $31 billion annual budget, was by far the largest employer on both the public and private employer lists – not surprising for the nation’s largest county by population, with more than 10 million residents.

The county runs a huge health and social service bureaucracy with five public hospitals, and its Sheriff’s Department employs 18,000 to service the unincorporated areas of the county and 42 of the county’s 88 cities.

UCLA added the largest number of local employees on the list – 974, or a 2 percent increase – for a total of 48,570. The county government was the next biggest gainer of employees, adding a net of 886.

The biggest percentage gainer on the public sector list was California State University-Los Angeles, which beefed up its local staff count by 23 percent with 572 additional employees to 3,085.

“In response to intense student demand and in support of the university’s graduation initiative, Cal State LA has hired additional faculty, advisors and other student-support professionals,” Jose Gomez, chief operating officer for Cal State LA, said in an email. “This will help ensure increased student success by providing greater academic support services, and the classes that students need when they need them.”

The biggest percentage drop was at the Los Angeles Community College District, where the payroll fell by 285 employees, or 4 percent, to about 6,900.

Health care providers account for three of the top 10 slots on the list and four of the top 10 gainers in terms of number of jobs added over the past year.

No. 1-ranked Kaiser Foundation Health Plan was kept in the top slot with an estimated 36,468 local employees. The Business Journal based its figure on the roughly 100 employees the hospital added when it opened in September of 2017 a new outpatient clinic in the Crenshaw district of South Los Angeles.

No. 4-ranked Providence Health & Services Southern California was the biggest job gainer on the list, adding about 1,450 employees for a total of 15,952. No. 6-ranked Cedars-Sinai Medical Center added 325 employees.

Other health care providers that significantly grew employee counts: No. 22 City of Hope was up by more than 900 and No. 24’s Children’s Hospital of Los Angeles increased by 885.

Long-term trends such as an aging population and more treatment options for conditions and diseases are factors, according to William Yu, economist with the UCLA Anderson Forecast.

Another factor driving the growth in health care employment has been a major infusion of federal dollars through the Affordable Care Act, according to Gerald Kominski, senior fellow with the UCLA Center for Health Policy Research. “There are growth opportunities for hospitals and other health care providers as a result of this money,” he said.

But some hospitals and health care networks on the list lost jobs over the past year. No. 38-ranked Memorial Care Health System shed 1,350 jobs when it closed the 158-bed Long Beach Medical Center after an active earthquake fault was discovered running directly beneath the facility. It still operates Long Beach Medical Center and the Miller Children’s and Women’s Hospital in Long Beach where it employs roughly 3,700 people.

“The steady growth at many hospitals has been offset by the closures of a few hospitals,” he explained.

No. 2-ranked USC was the biggest employee gainer over the past year, adding roughly 1,070 jobs for a total of nearly 28,900.

Another big gainer was No. 10 Allied Universal. The Santa Ana security services firm added roughly 670 employees to reach 12,879. Allied’s Chief Executive Steve Jones attributed the increase to several new and significant contracts the company won in L.A. County over the past year.

Acquisitions and staff reductions were key issues over the last year for the 24 largest firms on the Business Journal’s annual list of employee benefit consulting firms in Los Angeles County, ranked by employees doing benefits work in L.A. County.

Other companies that experienced reductions included No. 1-ranked Mercer, which shed 12 jobs, and No. 5’s Willis Towers Watson, which lost 65 consultants to fall from No. 2 position last year.