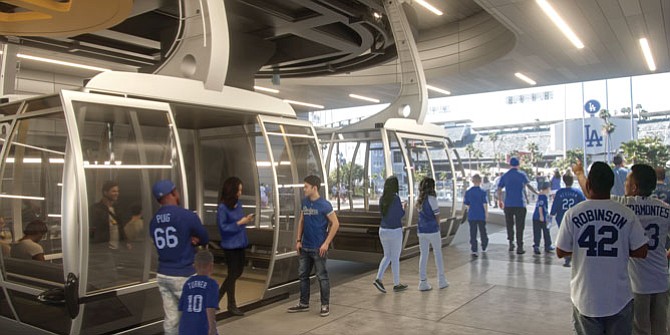 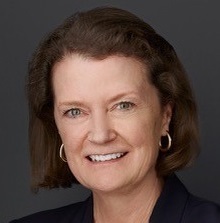 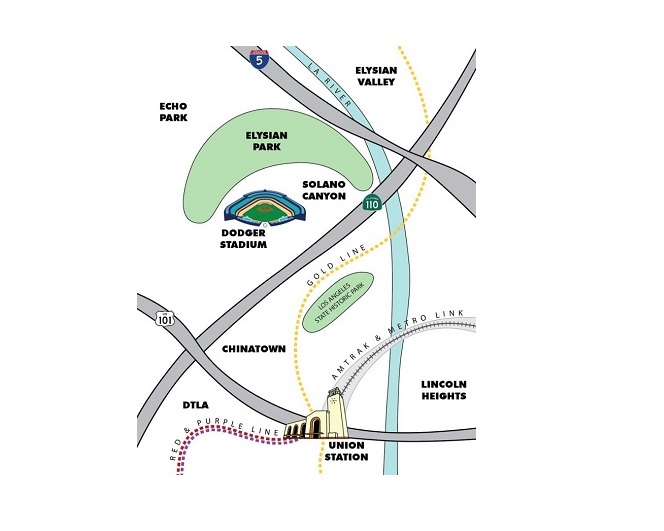 TBD: Planners have yet to propose a specific route.

The company unveiled in April a proposal to local transportation officials for a gondola line that would whisk people from Union Station to Dodger Stadium in five minutes. The project would cost an estimated $125 million. The Business Journal’s Howard Fine recently led an interview with Welborne, HR&A’s lead on project. Below are edited excerpts of her comments.

Why a gondola project to Dodger Stadium? Why not just stick with a bus line?

The bus line from Union Station to Dodger Stadium does pretty well, but it doesn’t carry as many people as the Dodgers would like.

There was a study done some time ago on different ways to improve access to the stadium, which is actually pretty isolated, with only five entry points. This gondola concept was one of the ways that popped out. It flies above traffic … and you can easily scale heights with this technology. It may seem like an unexpected technology, but it actually makes a lot of sense.

When you understand the technology and that you can carry 5,000 people per hour per direction, it suddenly becomes urban transit. It’s not just ski lift technology any more.

People tend to arrive at Dodger Stadium as early as two hours before game time to get their bobbleheads, meet friends, etc. So that’s 10,000 people the gondola system can take to and from the game. The average game sees about 46,000 people, with a maximum capacity of 56,000, so [the gondola would have capacity to service] 15 percent to 20 percent of the total crowd. Suddenly, you’re shaving off a lot of cars, the traffic around and inside the stadium is better, the air quality is better – and, besides, the gondola ride is fun. And Union Station is the other terminus because so many people take transit to there.

Warner Brothers has proposed its own gondola to take people from near its studio lot to the Hollywood sign. What’s going on here?

A lot of cities around the world already have gondola projects – it’s the U.S. that’s a little behind the trend. I just rode two completed in Europe in recent years. One was in London that was built in advance of the 2012 Olympics; it goes about three-fourths of a mile over the Thames (River) and it’s a great ride. I rode another one in Koblenz, Germany; that one goes across the Rhine (River). It was supposed to be a temporary installation for three years, and it’s now been there for eight and they are extending the lease further. Riding that gondola was so much fun as it swooped over the Rhine. And the gondola cars are fast, and the boarding on and off is easy. In fact, the gondola in Koblenz uses a technology we’re thinking about for the Dodger Stadium gondola.

It’s called a three-rope technology. There are two track ropes up above that act just like rail tracks, and then there’s a haul rope in the middle. The cabin can detach and the ropes are always moving. That means we could have up to 25 cabins running around all the time – that’s how you get to those high numbers of 5,000 people per hour. In that way, it’s different than a tram system like the one near Palm Springs, where only two cars can operate at any time because they are counterbalanced.

Would the gondola project to Dodger Stadium gondola just be used for the 81 home games and post-season games?

Under our proposal, it would run for other events at the stadium during the offseason. We’re still discussing how much it would run when nothing is going on at the stadium. We’re exploring this tourism angle. There’s another tram in Portland that goes up to a medical center complex. But 30 percent of the ridership is tourists seeking a view of Mount Hood. It seems that every place someone has one of these, there’s a tourism angle to it. 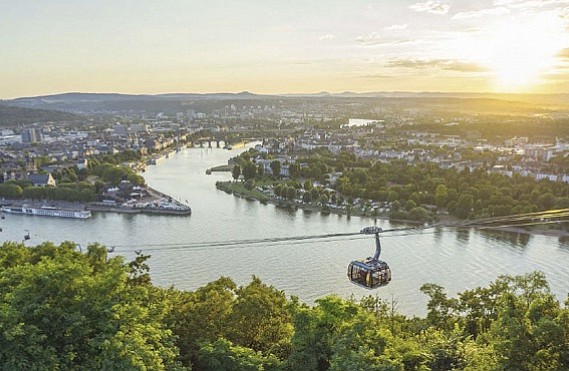 Type of suspension: Three-cable: two on outside and one central haul cable

Number of people transported per hour: Up to 7,600 people in both directions combined 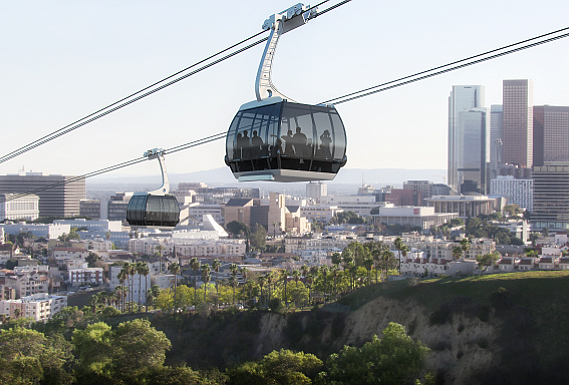 Sky High: Rendering of a cable car against L.A.’s skyline.

Type of suspension: Three-cable: two on outside and one central haul cable

Gondola car speed: Up to 1,480 feet per minute or 17 miles per hour (for five-minute ride)

Number of gondola cars: Up to 30 around event time; closer to 20 at other times

Number of people transported per hour: Up to 5,000 people in one direction around event times; fewer at other times 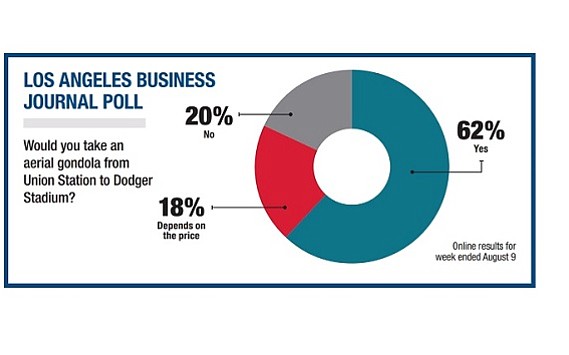