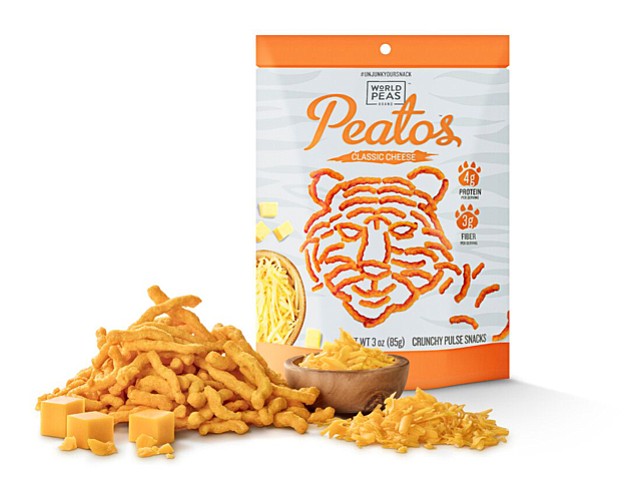 Peatos: Made of edible seeds such as lentils, peas.

Peatos are made out of “pulses,” which are edible seeds of plants such as lentils and peas. The official launch of the new brand was in February, and the product now is on shelves in 1,700 Kroger stores.

Snack It Forward also is stocking its snacks at other Albertsons Cos. Inc. subsidiaries and grocery stores including Vons and Pavilions. A planned partnership with Safeway stores is coming up, said Nick Desai, Snack It Forward’s chief executive.

The company also makes fruit snacks under Sunkist brand in addition to Peatos, and counts 20 employees. The privately-held company doesn’t disclose financials, but annual revenue was estimated at more than $10 million last year. It was founded in 2011 as Energy Labs and changed to its current name in 2016.

Desai, who had a stint in investment banking before turning to entrepreneurism, tapped into personal experience when looking into healthier alternatives.

“I remember many childhood trips to India where my parents are from and most of the savory snacks that come from there are lentil and pea-based. In the U.S., similar products are marketed as healthier.”

Snack It Forward has contract manufacturing operations in California, the Midwest and the East Coast. Desai declined to provide exact locations but said that Peatos’ growth helped strengthen and grow its supply chain.

The goal of the snack, he said, isn’t to add more products catering to a few who shop at high-end food stores but to provide a viable option for the many customers “who do eat snacks like Cheetos and Lays.”

Apparently there is a limit to what people will tolerate in pursuit of beauty.

Six people were arrested and 15 received cease-and-desist orders after the raid hit 21 locations in Santee Alley in the Fashion District on April 12.

The raid is the second in the past 14 months. Both followed complaints from people who developed skin irritations, rashes and itches from cosmetics products bought in the Fashion District which prompted an earlier operation, that resulted in at least eight arrests, Ishitani said.

The fake cosmetics seized during that bust were tested and found to have high levels of bacteria, including traces of animal feces,

officials conducted the most recent bust.

Revenue from the fake products was around $400 to $600 a day and most of the cosmetics seized originated in Asia, Ishitani said.

“The quality of replication is amazing with these products but if you look closely you can catch grammatical errors,” he said.

Ishitani added that two things are dead giveaways in assessing what’s fake and what’s not: location and price.

PierPass Inc., a not-for-profit organization created by terminal operators at the Port of Los Angeles and Port of Long Beach, is changing its pricing model and implementing an appointment-based system for container pickups, the entity announced on April 16.

Pierpass’s Offpeak program was launched in 2005 to address cargo-related congestion on streets and highways surrounding the two ports. Offpeak had charged a “traffic mitigation fee” of $72.09 per TEU for container pickups between 3 a.m. and 6 p.m. on weekdays. The pricing was intended to encourage cargo pickups during night and weekend shifts, when the fee was waived.

The plan worked so well that it drove enough traffic to the later hours and weekends to cause separate cases of congestion at the terminals. The new pricing calls for a cut in the fee to $31.52 per TEU, with everyone paying regardless of time or day. The rate for all other container sizes will be a flat fee of $63.04, officials said.