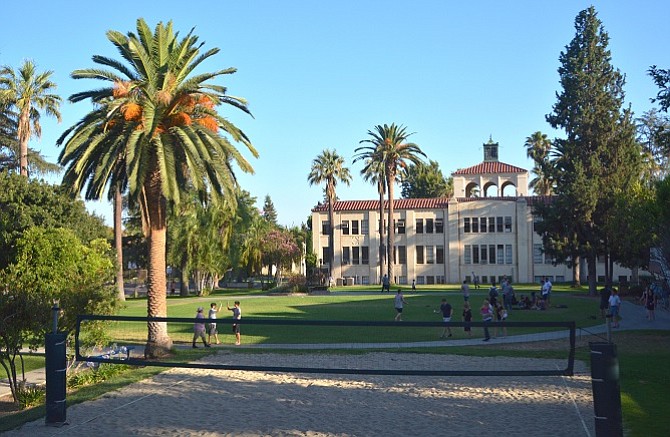 The property, with an address of 1539 E. Howard St., had been on the market since September, according to Keith Mathias, a principal at the Ventura-based RK Capital Real Estate Group that is WCIU’s broker.

The deal is expected to close in 16 months after EF obtains the required permits from the City of Pasadena.

The company also acquired 16 residential properties along North Oxford Avenue and plans to use them to house faculty and staff, Marino said. It also acquired an adjacent soccer field.

EF did not purchase 131 of the university-owned housing units, nor did it purchase the campus’s Hudson Taylor Hall, which is owned by religious interdenominational group Frontier Ventures, said Kevin Higgins, WCIU president.

“We’re hanging on to that,” Higgins said. “There are no offers in place. There is no discussion of selling those.”

“We thought a campus user was the best user of this property,” Mathias said. “We thought EF was a great fit.”

Local realtors told the Business Journal in February that the entire property could be worth as much as $40 million.

EF, a privately-held education company, plans to restore the campus’s historic buildings and bring them up to present-day codes, Marino said.

“We’re not a developer,” she said. “We’re an international education company.”

Presuming the sale closes, it will mark a departure for the property as EF Education First is a non-religious educational organization. Its U.S. headquarters is located in Cambridge, Mass.

EF was founded in Sweden in 1965. It employs roughly 46,500 people at its 580 offices in school spread out across 116 nations, according to the company’s website.

EF already has a West Coast presence in San Francisco, San Diego and Santa Barbara. But it plans to make the Pasadena campus a major center for its students, who primarily are international boarding school students of high school age.

Pasadena was an attractive location because it is home to the California Institute of Technology and other higher learning institutions, she said.

Some tenants on the campus currently have leases that are still in effect, she noted.

WCIU plans to move its staff of nine employees to a different location in Pasadena in six months’ time, Higgins said. He also acknowledged some alumni and other WCIU-affiliated people may not like the fact the school’s long-time campus has been sold.

“There are a lot of people who feel pretty emotional about it,” he said. “I’ve got to be a shepherd in that process.”

WCIU, a Christian college with an emphasis on missionary work, has owned the property since Presbyterian missionary Ralph Winter founded it in 1977. It has been an island of religious education since it was first occupied by Pasadena Nazarene College in 1910.

Winter also founded a sister organization, the U.S. Center for World Mission, an interdenominational religious outreach group, in 1976. It was rebranded as Frontier Ventures, and also shares space near the Pasadena campus.

Winter died in 2009 at age 84, and WCIU has since been scaling back its on-site educational programs, and transitioned to offering online education. Online education accounted for the entire enrollment of 66 students, according to the school’s 2016 annual report.