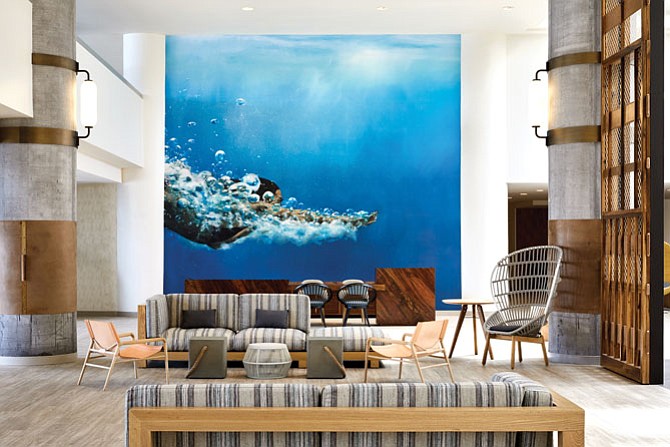 Hotel construction in L.A. continues to boom, with new hotels and renovations popping up in every corner of the county to cater to a stream of visitors that topped 48 million individuals in 2017.

One of the latest is the 393-room Westdrift Manhattan Beach, which completed a multimillion renovation and rebranding in March.

The hotel, which is the biggest in the beachside town and serves as a popular location for special events, is being pitched as a place to host tech conferences, among other things.

“Based in the tech hub area known as ‘Silicon Beach,’ the hotel is ideal for tech entrepreneurs and creatives in addition to business travelers, with its close proximity to LAX,” said spokeswoman Anna Cofer in an email. “The property boasts 26 sprawling acres as the backdrop for its more than 35,000 square feet of indoor-outdoor space, including 18 meeting rooms, a traditional ballroom and three large, industrial-chic venues for weddings, parties, corporate retreats, board meetings and private dinners.”

Weekday rates start at $289 and weekends at $259, according to a press release.

The property, which is a couple of miles from the beach and less than four miles from the airport, also has a nine-hole golf course and pool with cabanas. It was originally built in the 1980s as a Radisson.

The hotel is positioning itself as being near the Pomona Fairplex, Cal Poly Pomona and the Diamond Bar Golf Course, offering a free shuttle to the nearby attractions.

The opening comes as the Los Angeles County Fair Association drafts a strategic plan for the 487-acre Fairplex, which hosts more than a million visitors annually for the fair. The Los Angeles Economic Development Corp. also included the site in its proposal in October to host Seattle-based Amazon.com Inc.’s second headquarters.

The new DoubleTree has incorporated ecological measures including using water-conserving toilets and shower heads as well as serving a majority of locally-sourced ingredients at its restaurant Vita Italian Bar & Grill.

The ecommerce site, which sells activewear clothes under its own brand and others, also plans to open a pop-up location in Bridgehampton, New York and to introduce a private-label line at Neiman Marcus stores.

Carbon38, whose website offers leggings for around $100, had a successful pop-up store in 2016 in West Hollywood.

Foot Locker Inc. invested $15 million in a Series A in February, which brought Carbon38’s total funding to $26 million since 2013, according to a press release.

Carbon38 was also an early partner of Happy Returns Inc., a Santa Monica-based company which allows customers to return items from certain e-tailers at locations around the country and receive an immediate refund.

The new store will allow customers to customize garments and will sell clothes only available there, including collections inspired by Southern California, according to a press release from Champion.

“The global sphere of influence in Los Angeles with regard to fashion, art, sports and entertainment culture make it the perfect place for Champion to bring its iconic heritage and product stories to life,” said Susan Hennike, Champion’s president, in a statement.