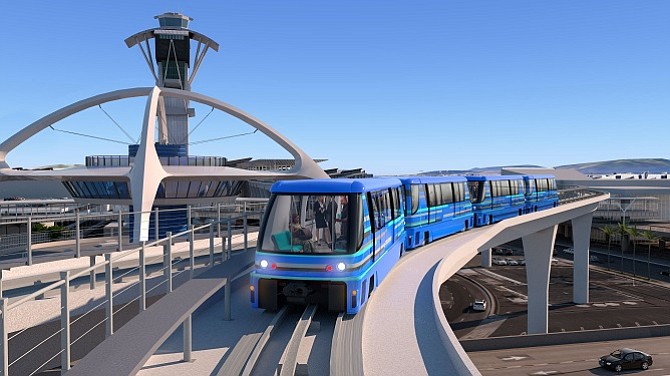 Rendering of the planned People Mover at LAX

The Los Angeles City Council on April 11 unanimously approved a $4.9 billion contract with a private consortium to build and operate an automated people mover to connect Los Angeles International Airport to nearby planned rail and car rental facilities.

The 30-year contract – billed as the largest single contract in dollar terms ever awarded by the city of Los Angeles – goes to a consortium of seven contractors known as LAX Integrated Express Solutions, or LINXS. The consortium received the highest technical score from airport staff among the five bidding teams.

The remaining $2.9 billion of the contract is earmarked for roughly 25 years of operation and maintenance.

“Making LAX the most passenger-friendly airport in the world means giving travelers what they need and have been asking for — reliable, convenient transportation to and from the terminals,” Los Angeles Mayor Eric Garcetti said in a statement. “This historic investment will ensure that LAX is seamlessly connected with communities across the region.”

The Los Angeles World Airports Board of Airport Commissioners approved the contract at its April 5 meeting. That came six weeks after the board selected LINXS as the recommended developer and entered into an early works agreement, which allowed for the start of pre-construction activities such as hiring, soil testing, engineering and further design of the people mover.

The LINXS consortium is comprised of seven prime contractors: