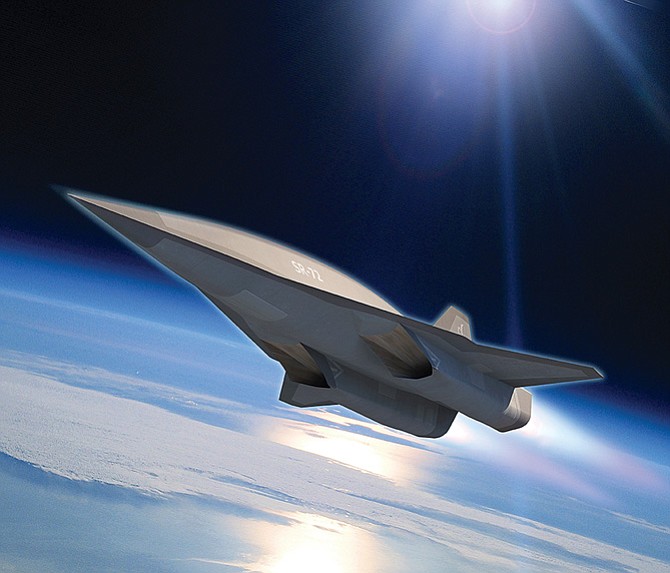 The race for the next military super plane is driving dollars to the Southland, with the U.S. Air Force boosting funding to Lockheed Martin’s Palmdale-based Skunkworks and Aerojet Rocketdyne Holdings Inc. of El Segundo to develop hypersonic jet aircraft.

Hypersonic flight, which is more than five times the speed of sound, or 3,836 mph, has been in development since the dawn of the Cold War, but breakthroughs in jet technology within the last decade – as well as military rivalries with China and Russia – have renewed interest in the technology by the top military officials.

“We must push the boundaries of technology in every area,” Air Force Chief of Staff Gen. David L. Goldfein said in a statement in May, announcing the acceleration of U.S. efforts to research and develop hypersonic flight. “Our adversaries aren’t standing still. They are looking for every advantage they can get.”

Those efforts appear to be moving forward in earnest as Aerojet Rocketdyne announced Oct. 9 that it entered into an agreement with the Defense Advanced Research Projects Agency, or DARPA, to develop and ground test a hypersonic jet engine. The funding amount was not disclosed. Such a hypersonic jet engine would likely be used to propel a hypersonic unmanned spy aircraft being developed by Lockheed Martin’s Skunkworks division in Palmdale, defense analysts said.

Spokeswomen for DARPA and Lockheed Martin declined to make available executives for interview on these secret programs. A spokesman for Aerojet Rocketdyne declined comment.

Hypersonic flight is seen by Air Force generals as an substitute to watching adversaries using spy satellites, which have predictable orbits and are increasingly believed to be vulnerable to offensive weapons launched by countries such as China and Russia, said Mark Lewis, director of Institute for Defense Analyses’ Science and Technology Policy Institute, a federally funded research and development center in Alexandria, Va. Lewis served as chief scientist of the U.S. Air Force from 2004 to 2008.

“A high-speed plane would primarily be an intelligence gathering asset,” he said. “It would be very hard to detect; if detected, it would be hard to stop; it would be highly maneuverable; it would be able to penetrate adversary airspace.”

An unstoppable hypersonic spy jet has long appealed to the U.S. military, but efforts have fallen short over the last half-century. That changed when Boeing Co.’s X-51 unmanned scramjet aircraft, with an engine made by Aerojet, climbed to speeds above Mach 5 for 210 seconds over the Pacific Ocean near Naval Air Station Point Mugu in 2013.

“Charles Lindbergh’s flight across the Atlantic showed, ‘Wow, a plane can fly across the Atlantic,’” Lewis said. “In some ways, the X-51 occupies the same niche in the hypersonic realm. Once we flew the X-51 it showed all of us that this technology was achievable.”

Rocket-powered aircraft have flown at hypersonic speeds before, but what made the X-51’s hypersonic run different was its engine. The aircraft’s scramjet engine gulped air from the atmosphere, sprinkled it with jet fuel and combusted the pressurized mixture at hypersonic speeds.

“A ramjet, or scramjet, engine has been likened to starting a match in a hurricane,” Richard Aboulafia, vice president of analysis with the Teal Group Corp. in Washington, D.C. “It’s very difficult.”

Hypersonic scramjet-powered aircraft are seen as an improvement on hypersonic rocket-powered aircraft because of their ability to do more with less. For example, liquid-propellant rockets carry oxygen tanks to fuel combustion, which adds bulk and weight to the aircraft. Scramjets, on the other hand, can stay lean by breathing in the oxygen around them, said George Nacouzi, senior engineer at Rand Corporation.

“It can be lighter, it can carry more payloads, it’s reusable,” he said.

Hypersonic vehicles could be useful as cruise missiles and bombers as well, Lewis added. DARPA is funding research and development efforts in hypersonic spy planes, bombers and cruise missiles with Lockheed Martin, Aerojet Rocketdyne, Boeing and Raytheon Co., though due the programs’ secret nature, little is publicly disclosed about the scale of the U.S. military’s investment.

No two aerospace firms are better positioned than Lockheed Martin and Aerojet Rocketdyne when it comes to the development and construction of a hypersonic spy aircraft, said Lewis.

It’s not certain how many hypersonic aircraft the Air Force would order, but aerospace analysts said that it could be more than 30, or about the same number of SR-71 Blackbird spy planes built.

Revenue to Lockheed Martin and Aerojet Rocketdyne to build and maintain such a fleet would be significant, but not earth shattering. For example, the SR-71 Blackbird cost $33 million per air frame to build. And, support costs for flying 13 of the planes in 1989 – the aircraft’s last year of operation – were $220 million, according “SR-71 Revealed: The Untold Story” by Richard H. Graham.

Lockheed Martin Chief Executive Marillyn Hewson said in 2016 that her company estimated it will cost less than $1 billion to develop, build, and fly a demonstrator hypersonic aircraft the size of an F-22.

Hewson said in a 2014 speech that a full-scale version of the hypersonic plane– which has been referred to as SR-72 – could be operational by 2030.

“2030 is the best-case scenario for production,” Teal Group’s Aboulafia said. “Prototypes could be built today and into the 2020s.”

Pressure on the Air Force to move quickly is mounting, however.

China and Russia are already flight testing hypersonic weapons, and several other countries have shown interest in pursuing many of the underlying technologies for hypersonic flight, according to the May press release from the U.S. Air Force.

“Whoever gets there first has a distinct strategic advantage,” Aboulafia added. “It’s not quite at the level of being the first to have an atomic bomb, but it gives the other side a big advantage.”