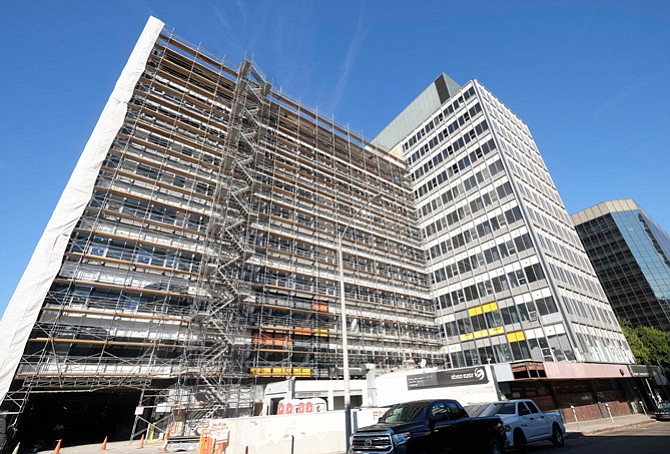 Jamison's office building at 3350 Wilshire Blvd. will be turned into 216 apartments. Photo by Ringo Chiu.

Rising demand for housing in Koreatown and Mid-Wilshire coupled with a glut in the office supply has Jamison Services Inc. seeing new opportunities in residential real estate.

The neighborhood’s major office space player for a quarter century will have converted 800,000 square feet of offices into apartments over six years by 2019, said Garrett Lee, president of Jamison.

“It’s a newer direction for our company,” Lee said. “Traditionally, we’re an office management company, but this new (residential) division was created almost five years ago, and our first project was an adaptive reuse project.”

Koreatown has experienced a post-recession residential construction boom as after falling for the three previous quarters.

“We have growth and people feel that, but it’s just not growing that fast,” said Marc Weidenmier, former director of the Lowe Institute who just started a new post as professor of finance and economics at Chapman University in Orange.

The quarterly survey appears to be the first to exclusively track consumer sentiment among a sampling of Los Angeles County residents. The third quarter survey included 500 respondents who answered questions about their current economic situation, their outlook for their own finances and spending in coming quarters, and their outlooks on both the national and local economies.

Consumer spending accounts for roughly 70 percent of all economic activity in the nation, which is why consumer sentiment is tracked closely. Both Chapman University and the Conference Board of New York publish consumer sentiment indices for California – both with a baseline of 100 – but don’t break that down further for Los Angeles County.

The Lowe survey is one of the first in the nation to track consumer sentiment at the local level, the authors said.

Weidenmier cited several factors for the comparatively more cautious attitude that the Lowe Institute survey found among L.A. consumers. He said L.A. County, with its diverse makeup and the port complex, is ground zero for concerns about potential moves to restrict immigration and trade, which have been threatened by Trump administration all year.

“The story of the past year has been this tremendous amount of uncertainty over what lies ahead for both trade and immigration,” Weidenmier said. “L.A., of course, has the largest port complex in the Western Hemisphere. And the recent legislation for sanctuary status for undocumented immigrants only amplifies this.”

Another factor, he said, has been the steadily increasing minimum wage in Los Angeles and across the state. That’s a boon for some workers, but others have seen their hours cut as an offset, and consumers are seeing the wage increases passed on in the form of higher prices, he said.

L.A. County is considered to be at what many economists consider “full employment” with a jobless rate of 4.8 percent in August. That means almost everyone who can work is working – but it doesn’t mean everyone is satisfied with their jobs or pay, Weidenmier said.

“They have jobs, but not the jobs at the hours and/or salary they feel they should be earning,” Weidenmier said.

Consumer sentiment declined 2.5 percent on respondents’ outlook for their personal financial situations in the next year. That came on top of a 4.3 percent decline in this measurement in the second quarter.

The survey, which is modeled on consumer sentiment surveys from both the University of Michigan and the Conference Board, did not take into account the high cost of housing in the L.A. region or the spread of homelessness.

Housing costs might not be much of a drag on consumer sentiment, according to Christopher Thornberg, economist and co-founder of Westchester-based Beacon Economics.

“Rental burdens in Los Angeles, while still high, have been dropping for the past couple years,” Thornberg said. “Wages have been rising faster than rents, especially for low-income people, so this means the overall rent burden is less.”

Home purchase prices may be “appallingly high,” Thornberg said, but that hasn’t kept people away from the market.

“They are still lining up to buy homes,” he said. “It’s just that there aren’t enough homes for sale.”

One bright spot in the Lowe Institute survey was a 5.4 percent increase in positive sentiment when consumers were asked whether the next year would be a good time to purchase a vehicle. That’s a reversal from steady declines in sentiment on this question over the last few quarters.

“This is the largest durable goods purchase that consumers make, so it’s a key indicator,” Weidenmier said.

Consumer sentiment among respondents under 55 years of age increased 17.5 percent, while sentiment among seniors declined 13.6 percent. Respondents with annual earnings between $100,000 and $150,000 registered one of the largest drops in sentiment, 19.7 percent.