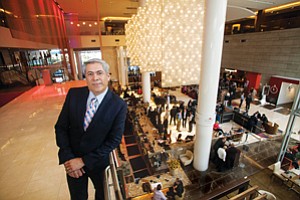 The number of hotel rooms available or under construction around the Los Angeles Convention Center doubled to more than 5,000 rooms over the past five years, according to a study released yesterday by Councilmember Jose Huizar, who represents downtown.

The progress shows that the city is more than halfway to the goal set in 2013 of having 8,000 hotel rooms within three quarters of a mile of the convention center by 2020, the study said.

The study was released the same day that the nonprofit Central City Association, a downtown advocacy group, held a general membership meeting focused on tourism at the JW Marriott Los Angeles L.A. Live.

Speakers, including Doane Liu, executive director of L.A.’s Department of Convention and Tourism Development, and Javier Cano, vice president and market general manager of the JW Marriott, said that the convention center needs to be expanded in order to attract more hotel developers and larger conventions.