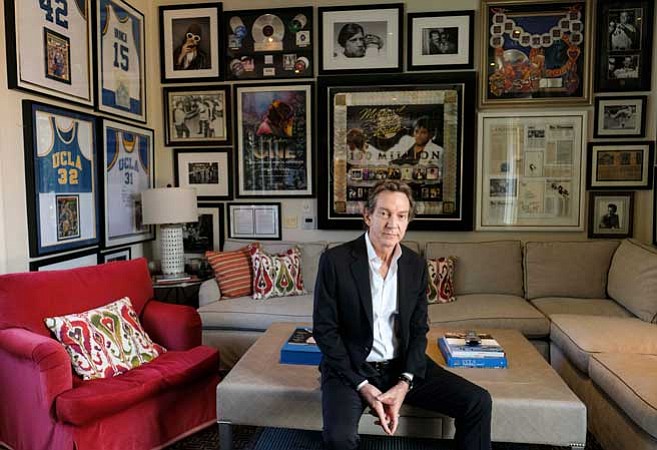 Entertainment and corporate attorney John Branca talks about the late pop superstar Michael Jackson in the present tense, as if he were still here.

It’s because Branca serves with John McClain as co-executor of the Michael Jackson Estate, a job that includes keeping the legacy alive by overseeing the licensing, promotion and packaging of Jackson’s image and music for new projects.

“He is still with us,” Branca asserted. “A so-called typical executor of another estate might oversee the stock portfolio, et cetera, but you can’t do that with this estate. It’s really about managing an entertainer’s legacy and assets…much like a living entertainer would have a manager.”

Branca, partner and head of the music department at Ziffren Brittenham law firm in Century City, has represented 30 members of the Rock and Roll Hall of Fame, including Aerosmith, Beach Boys, Doors, Carlos Santana, Earth Wind and Fire and the Rolling Stones. The firm’s clients also include younger artists such as Justin Timberlake, Beyoncé Knowles, and Alicia Keys.

“I don’t want to be viewed as a one trick pony, or a one hit wonder,” Branca said.

Branca is best known for his long association with Jackson, which resulted in Branca and McClain being named executors of the estate in 2009 at Jackson’s request in his will, a choice hotly contested by the Jackson family but eventually resolved.

Branca, a former guitar player in a rock band, a music fan who used to spend his weekly allowance to buy one single record every Saturday, began his law career representing both sports figures and musicians. He represented National Basketball Association players and world champion motorcycle racers at the same time he served the Beach Boys and did work for Bob Dylan, Neil Diamond and George Harrison while assisting a then-senior law partner.

The sports connection came naturally. Branca owns one of the world’s most noted baseball card collections, and is the nephew of deceased Brooklyn Dodgers pitcher Ralph Branca – who famously gave up the “Shot Heard ‘Round the World,” the game-winning homerun that decided 1951 National League pennant playoff series, sending the cross-town rival New York Giants on to the World Series. Branca said his focus narrowed to music when he signed Jackson in 1980, just after the release of Jackson’s hit album “Off The Wall,” his first album for his longtime label Epic Records.

“Michael was a very young man – I think he had just turned 21 – who knew what would follow that?” Branca said.

To date the 1982 album has sold more than 100 million copies, making it the biggest selling album of all time, according to Billboard.

“With ‘Thriller,’ he became the biggest thing in music since the Beatles and Elvis Presley, and has maintained that lofty position ever since,” Branca said.

Branca negotiated the deal when Jackson bought the Beatles catalog in 1985, as a part of a $47.5 million deal for ATV Music Publishing. Ten years later, Sony paid Jackson a reported $115 million to become partners in Sony/ATV. In 2016, The Jackson Estate sold its 50 percent stake in Sony/ATV for a $750 million, giving Sony sole ownership and the estate a healthy infusion of cash.

It’s hard to compete with the King of Pop, but Branca enjoys personal success as well. He’s a constant presence on multiple lists of top entertainment attorneys, including being named Billboard’s 2016 Lawyer of the Year. His high profile also tends to land him on more speculative lists, including one appearing on the Worlds Top Most website, ranking him the third wealthiest lawyer in the world with a net worth of $50 million. More reliable sources close to Branca pegged his worth closer to $100 million.

Branca would not confirm or deny any reported figures, but did get a laugh out of finding himself on recent list of the Top 10 Most Expensive Lawyers on Wonderslist website, which did not include any fee figures but ranked Branca No. 3.

“Maybe I should put that on my resume,” he joked.

Back to Jackson, whom Branca insisted was no Wacko Jacko.

“Michael was unique,” Branca said. “He didn’t have a normal childhood. He started rehearsing about the age I started buying records. Michael was not hanging out on street corners, so in that sense he was unique. Wacko? I don’t think so.

“He was playful, obviously creative, he was driven, he was ambitious, he was compassionate,” Branca continued. “He was a both a pleasure and challenging to work with at the same time.”

Branca believes the American pop music press was as quick to brand Jackson as a freak as it was to negate the performer’s talent, which Branca said was more readily embraced overseas. He attributes at least some of it to racism in the U.S. music industry.

“There was absolutely racial bias involved,” Branca said. “I’ll never forget the letter we got from (Rolling Stone founder) Jann Wenner, saying that Michael Jackson was not cover material, when ‘Thriller’ came out.”

Wenner, however, disputed racial bias played any role in the decision to bypass the Jackson cover.

“Not racial,” Wenner said in an email. “Look at our previous history of covers and coverage of black music. Michael then was a teen pop star. Not exactly in our wheelhouse.”

Rob Stringer, Sony Music’s chief executive, said Branca was the right person to chart Jackson’s course as the pop-star began to break racial and musical boundaries in his solo career after the dissolution of the family boy band Jackson 5.

“I think John was around for that transition – that step up in recognition for Michael as the biggest artist in the world,” Stringer said. “Applying that understanding to the dealing of the estate was a natural transition for him.”

Stringer added that there is another simple key to Branca’s success: He is easy to work with.

“The music business in not always full of the most warm and cuddly people,” Stringer said.

“John Branca is, as I am, a groupie,” Lamarre said. “He loves artists as I love artists. When we meet, even today, I don’t remember many conversations about money, it was all about the artistic content.”

Lamarre said he can’t count the number of times Branca has seen “Michael Jackson One.”

“He was always looking at the show, (asking), ‘Would Michael like that?’” Lamarre said. “Michael was an innovator, pushing the boundaries of creativity and technology. (Branca) focused on the quality of the show, and the financial outcome, in a 50-50 split.”

Whether the artist is Jackson or someone else, Branca said his main interest and expertise today lies in buying and selling music catalogs. Despite a recent drop in record revenue due do streaming, he said music publishing has remained strong because music publishers are not solely dependent on the sale of records, but can also tap into public performance royalties.

And, he added that the recording industry is finally profiting from streaming revenues because streaming services including Spotify and Apple Inc.’s Apple Music have successfully converted customers from free downloads to low-priced monthly subscriptions.

Branca cautioned that the music business isn’t the best choice unless you have a passion for the art itself.

“For somebody who is interested first and foremost in making money… you would probably go up to Silicon Valley,” Branca said. “But for me, my motivation is that I love music … Growing up, if you had told me I could represent Brian Wilson, or Michael Jackson, I would have said, how much do I have to pay to do that? To even meet one of those people would have been enough.”