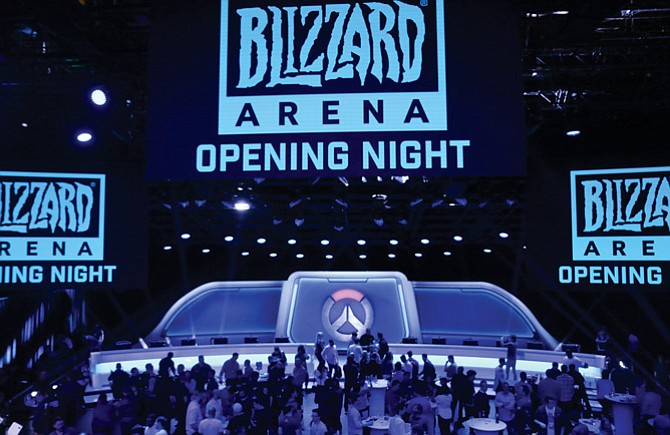 Los Angeles — Studio 1 looked every bit its age before the demolition crews arrived.

Worn carpets, stained walls, tattered fabric, an unwelcoming darkness. It was a relic of late-night TV, a location that once entertained the country with appearances from the likes of Frank Sinatra, Joan Rivers, Ronald Reagan and Arnold Schwarzenegger.

The famed lot at Burbank Studios, home for decades to “The Tonight Show” starring Johnny Carson, then Jay Leno, and for a brief time, Conan O’Brien, has moved to its next act.

The studio where Carson once held court is now part of Blizzard Arena Los Angeles. It features new stadium seating, a grand stage, trophy halls, a merchandise store and plenty of other amenities.

That’s all to showcase the video games and growing business of professional gaming competitions of Blizzard Entertainment Inc., which is headquartered in Irvine, and operates as a unit of Santa Monica-based Activision Blizzard Inc.

“The Tonight Show was here for 40 years, and we saw breakthrough after breakthrough,” Blizzard E-sports Business Operations Manager Adam Rosen told a crowd of about 300 at opening-night festivities last month. “It’s only fitting that Blizzard is here and will be leading the next generation of e-sports breakthroughs.”

The development in Burbank is the latest addition to a growing infrastructure of e-sports facilities in Los Angeles County, including several recently opened training facilities for professional e-sports teams, as well as Riot Game’s North American League of Legends Championship Series Studio, home to a 300-seat arena and an 80-seat theater across Olympic Boulevard from the video-game company’s West L.A. headquarters, among other.

Eight months of planning and construction, and millions of dollars in renovations transformed the 50,000-square-foot facility at 3000 W. Alameda Ave. in Burbank into a mecca for e-sports, one of tech’s hottest segments.

The arena occupies studio 1, 3 and 5. It can broadcast simultaneous events with its two control and audio rooms, three sound stages and five edit bays.

A private tour, part of the opening-night program for invited media, partners and employees, provided a sneak peek into Blizzard’s continued evolution from a video game publisher to mass media content provider.

The four floors are outfitted with 39 workspaces and offices, dressing and conference rooms; press rooms; observer rooms with glass windows overlooking the competition below; guest lounges and team rooms with plush couches, mini fridges and tables; a green room; “shoutcaster” room for boisterous announcers and analysts; a concession stand; and hair and makeup rooms.

Player practice areas mimic those on the live set, down to the regulation 40-inch-wide desks.

“When they go from the practice environment to on-stage, there is no difference,” says Senior Director of Global Broadcast Pete Emminger during the tour.

One room is dedicated to instant replay, taking in every camera feed on the players and the action. Another is reserved for pregame coverage, analysis, break segments and post-game wrap-ups.

“This is the first facility in North America that we’re dedicating to esports production,” Rosen told the Business Journal.

Competitive gameplay typically consists of one-on-one matches or two teams that face off on opposite sides of the stage with large video monitors tracking the action in a theater-like setting.

Broadcasts and streams of esports imagery cuts quickly between action inside the game, close-ups on the players and reactions from fans in the stands. Typical matches last about 15 minutes, although the timespan varies based on the game, with some lasting hours.

The Burbank site has long been a trailblazer in the entertainment industry. NBC built the soundstage as the first for color broadcasting. Its premier in-color production, aptly named for the year it was established, was “Entertainment, 1955,” a mix of music, comedy, and drama acts.

The lot served years later as the permanent home for “Days of Our Lives,” “Saved by the Bell,” “Access Hollywood” and other programming.

Now it’s home to the Overwatch League, which kicks off its first season next month. Each player controls one of several characters in six-person team matches, under the league’s format.

The league is based on the hit first-person shooter game “Overwatch,” which has grown into a $1 billion business since its May 2016 release. The league features 12 franchises in Boston, London, Los Angeles, Miami-Orlando, New York, San Francisco, Seoul and Shanghai.

The arena’s opening weekend of Oct. 13 featured the Overwatch Contenders Season One Playoffs, crowning the top teams in Europe and North America. That was followed by the Hearthstone Championship Tour’s Summer Championship with $250,000 on the line. Then came the Heroes of the Storm Global Championship Finals and World of Warcraft Arena Championship, from which top players moved on to a finale Nov. 3 and 4 at Blizzcon, the company’s annual fan fest at the Anaheim Convention Center.

Spectators, according to Rosen, can expect to pay about $15 for daily tickets and around $40 for weekend packages at the arena, a developing line of business for Blizzard Entertainment.

Though esports made up a small part of Blizzard’s 2016 revenue of $2.4 billion, the publicity from the arena and global competitions could increase its value to the company. Its growing esports unit has more than 50 dedicated workers in Irvine, Rosen said.

The division is developing plenty of content, from highlights and recaps to weekly collegiate broadcasts and other amateur events.

“When we look at esports right now, we are producing more content than we’ve ever produced before,” said Rosen, who co-leads Blizzard’s collegiate esports efforts. “Our goal is to have content here almost every single week of the year. We’re very big believers in esports.”