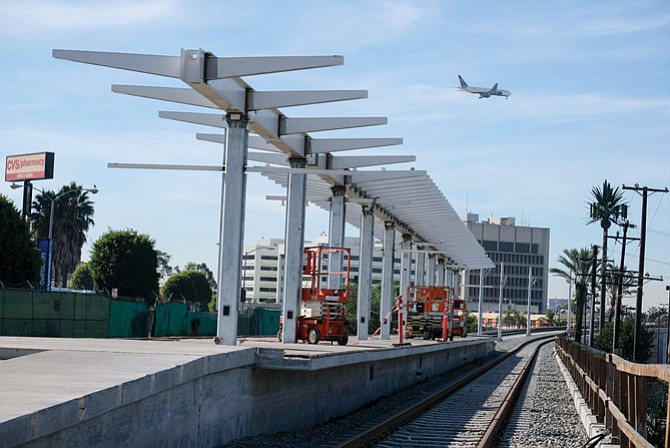 Los Angeles — Commercial development is booming in Inglewood, and residential real estate is anticipated to follow.

All of that, they say, could also set the stage for a growing office market in the next decade.

Henry Manoucheri, chief executive of Century City-based real estate investment firm Universe Holdings, which has acquired seven apartment properties in the city since 2014, said there’s a lot of potential in the Inglewood marketplace. He cited a 30 percent increase in local rents since 2014.

Inglewood is “still rough around the edges, but demographically, it’s changing and gentrifying,” Manoucheri said. “It’s not going to be quick. It’s one of the last sleeping markets in Los Angeles. I think rents here are some of the most affordable anywhere in the L.A. Basin and it’s still very close to the Westside of L.A. and to the South Bay.”

Inglewood Mayor James Butts is downright bullish on the future of his city, pointing to the ongoing entertainment and infrastructure projects in the works or the subject of negotiations. There’s talk of a possible move by the L.A. Clippers basketball team, currently playing in Staples Center in Downtown Los Angeles, to a sports stadium dedicated to the team in the city near the new stadium and Hollywood Park.

“In 10 years, Inglewood will be the new downtown of Los Angeles County,” Butts said. “It will be the sports and entertainment capital of Southern California.”

The overall lineup of development is starting to drive up apartment rents within the city, according to real estate brokers, even though the first ball won’t be thrown until at least 2020, the anticipated opening date of the stadium.

The upward trend is already in swing – third-quarter average apartment rents are $1,810 per month in Inglewood, up from about $1,400 in 2013, according to market tracker Axiometrics. That’s still a relative bargain in L.A. County, where average monthly apartment rents are now around $2,237, according to the 2017USC Casden Multifamily Forecast, up 18 percent over the same period.

Projections from Axiometrics, meanwhile, anticipate the average rent in Inglewood increasing another 9 percent or so, to about $2,000 per month once the stadium opens.

“Obviously with the stadium being built, that’s going to be a premiere destination for entertainment, and having two NFL teams come, instead of 10 games a year, now it’s 20 games a year,” Brody said. “It’s more jobs, it’s more revenue and it’s more people coming to spend money. With new amenities coming, it’s a huge booster for rents and also a catalyst for property owners to buy these (multifamily) buildings and renovate them, so there is some new development.”

San Francisco-based developer Wilson Meany, in a joint venture with San Francisco-based Stockbridge Capital, is building the new Hollywood Park Community as part of the stadium project, which will bring 2,500 new apartment units, 550,000 square feet of commercial retail space, a 300-room hotel, a 120,000-square foot-casino and 890,000 square feet of office space near the stadium.

Wilson Meany broke ground on the 238-acre site in 2014 and the developer expects to complete the master-planned project in 2023.

“People talk about the stadium development, but it’s not only the stadium, it’s the surrounding development that’s being built in conjunction with the stadium,” said CBRE multifamily broker Matt Levis. “...New jobs are being created and those factors will contribute to the rent growth.”

Brokerages are seeing the change in the city, as are residential finance firms such as Westwood-based investment firm Arixa Capital Advisors, which has noted an increasing trend of new investments in older residential properties.

“Inglewood is not rent controlled, and there are a lot of apartments,” said Greg Hebner, managing director for Arixa Capital. “Now the community is expecting more product similar to what’s on the West Side and there’s a lot of opportunity. A lot of smaller apartments are being substantially upgraded and renovated.”

The market for single-family homes is also getting the benefit of all the action.

Zillow characterizes the single family home market in Inglewood as “very hot.” The current median home price in Inglewood is $490,500, and the price has risen 11 percent from last year, according to Zillow data. Zillow predicts the value will rise another 3.4 percent in the next year. The median price for a home in L.A. County is $576,900, up 6.6 percent over for the same period.

Construction on Metro’s Crenshaw/LAX light rail train line is currently underway with three stops in Inglewood. The line will eventually have a total of eight stops, and connect the Expo Line to the Green Line and LAX when complete in 2019.

Horne expects growth for not just Inglewood, but for the surrounding areas as well.

The city also stand to get an addition to its arts scene, according to Butts, who said architect Frank Gehry is designing a new venue for the Los Angeles Philharmonic’s youth orchestra to be built near the city’s civic center.

Bloodgood cited some office projects under development near the stadium, and predicted that entertainment, residential and retail will drive more.

Dana Brody, a Los Angeles-based senior vice president for Chicago-based brokerage Jones Lang LaSalle Inc., and a multifamily expert for the firm, said office activity in Inglewood could get hotter with the new amenities coming in the future.

“I think Inglewood hasn’t been a primary target for a lot of office construction and office relocation, but I think all of the new development is going to attract more office tenants when you have more people living in the area and more shopping destinations,” Brody said. “I think it’s going to become a hub for more office, and they could make a play for some of these tech companies already being priced out of Silicon Beach and Hollywood. It could be a great opportunity for the city of Inglewood to have a much better chance of attracting more high profile office tenants.”

This story has been updated to correct product type square footage of the Hollywood Park Community provided by CBRE.