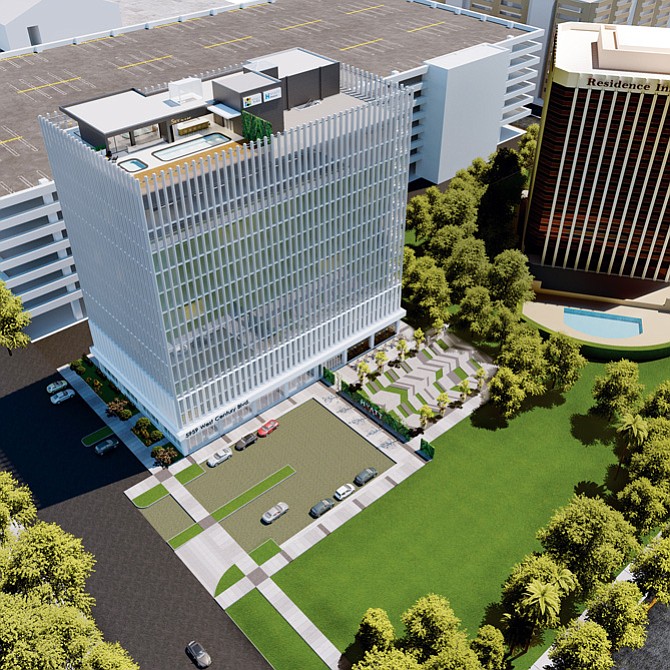 Tourism, development and infrastructure activity are the driving factors behind the planned conversion of a 13-story office tower near Los Angeles World Airports into a dual-branded hotel.

The office structure at 5959 Century Blvd. will be renovated into a 129-room Hyatt House and 272-room Hyatt Place Hotel for Hyatt Hotels Corp. of Chicago, according to investment banker George Smith Partners.

The Century City-based firm arranged $50 million in construction financing for the conversion project on behalf of the owner, a limited liability entity named 5959 and an affiliate of West Los Angeles hotel financier and developer California Real Estate Regional Center.

5959, which bought the 258,000-square-foot building a year and a half ago from L&R Group of Cos., expects to finish converting the property sometime in 2019, according to Zachary Streit, vice president of George Smith Partners. Terms of the deal were not disclosed.

“There is growing demand in the LAX submarket, and the current hotel stock is largely outdated,” Streit said in a statement. The hotel is expected to attract business and leisure travelers, he added.

The hotel will feature a mid-century inspired urban design and rooms with 11.5-foot ceilings. Amenities should include a rooftop bar, pool and restaurant, other dining options and a fitness center, according to the firm.

“The dual-branded Hyatt Hotel is located in one of the strongest hotel markets in Los Angeles, thanks to its proximity to LAX and its central location to all major L.A. attractions,” said Steve Shpilsky, principal of 5959, in a statement. “The city’s $14 billion LAX modernization, along with new public transportation, the under-construction $2.7 billion NFL Stadium, 2028 Olympics, proximity to Silicon Beach, and emergence as one of the great global cities, will continue to stimulate market demand for years to come.”

The project is expected to create over 1,000 new jobs in Southern California, Shpilsky said.

The property includes a nearly 85,000-square-foot, fully-leased warehouse and an industrial yard at 16627 S. Avalon Blvd. in Carson near the 91 and 110 freeways, and sits 14 miles from the ports of Los Angeles and Long Beach.

“This site is a strategic asset, located in the heart of the South Bay submarket,” said Ryan Dunlap, senior vice president of investments, for CenterPoint. “Given its proximity to Los Angeles’ dense population, we are excited to acquire this property in a thriving, e-commerce region.”

Daniel Reaume and Rustin Mork of downtown-based Realty Advisory Group Inc. represented CenterPoint in the transaction. The seller, a private individual, was represented by Granger Co. of Torrance.

The South Bay had the second-lowest vacancy rate for industrial product of all L.A. County submarkets, at less than 1 percent, in the third quarter, according to Jones Lang LaSalle Inc. Asking rates for the submarket rose 13 cents, or nearly 18 percent, compared to the same period a year ago.

The company’s portfolio includes 58 million square feet and 2,363 acres are under development in the company’s industrial parks.

A pharmacy-leased property in East Los Angeles has sold for $8.2 million, according to downtown brokerage firm CBRE Group Inc., as a sign of the increasing demand for retail product.

“This sale is the most recent example of Paragon’s successful California-based value-add retail strategy,” said Erwin Bucy, a principal with Paragon, in a statement. “One of the most rewarding parts of retail is being able to bring great tenants to underserved parts of our community, and concurrently create value for our investors.”

Demand for retail properties in the greater L.A. area is strong, according to CBRE. The area’s large and diverse population and solid fundamentals have been supporting increasing leasing activity, and occupancy levels are expected to remain steady over the next 12 months.