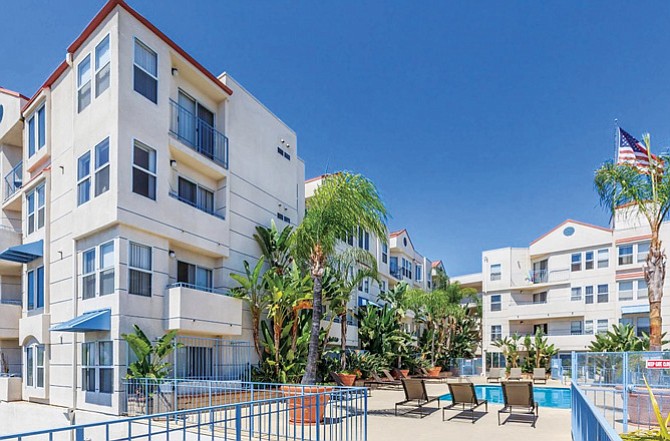 Tenzer said his client chose to defease the existing loans and refinance to take advantage of lower interest rates. Defeasance, according to Mory Barak, managing principal of downtown-based Lion Real Estate Group, is a form of prepayment whereby investors of a loan are assured payment of the same interest rate they were promised during a specific period of time, even if the loan is paid off earlier than anticipated.

“While nobody likes prepayment penalties, often times it behooves the borrower to absorb the prepay cost to liberate trapped equity and lock in lower rates going forward,” Tenzer said in a statement.

George Smith Partners documented the portfolio’s success and the owner’s ability to improve the property’s net operating income through green energy updates in order to secure competitive refinancing for the client, according to the firm.

The historic Jensen’s Recreation Center electric sign, which has sat dark for half a century atop an 83-year-old mixed-use building in Echo Park, has been restored to its original glory.

Building owner Santa Monica-based real estate investment firm Vista Investment Group, as part of a multimillion-dollar renovation program that includes the restoration of the building’s original brick façade, entrance and lobby, and renovation of the original 46 apartment units, repaired and relit the rooftop sign, which has been inoperable for most of the past 50 years, according to Vista.

The sign adorns 1700 W. Sunset Blvd., a 46-unit apartment building above 10,000 square feet of commercial space that includes a 7,300-square-foot bowling alley and billiards parlor space on the ground floor, which is currently available for lease. Vista has owned the structure since 2014.

The 17-foot-by-28-foot sign, made up of 1,300 red, green and white light bulbs, features the building’s name and a bowling ball knocking down pins. The bulbs are controlled by electric motors that switch them on and off to give the appearance of movement, Vista explained.

“Jensen’s Recreation Center is a city treasure and we’re proud to have brought it back to its original glory so it can be enjoyed by those who live in and visit Echo Park,” said Vista President Jonathan Barach in a statement.

About 1,380 apartment units came onto the market in downtown Los Angeles in the third quarter, according to a quarterly residential real estate report from the Downtown Center Business Improvement District.

Downtown currently has about 22,400 of market-rate apartments, with another 12,255 designated as affordable, and about 6,100 condo units.

The report on new apartment units highlights the opening of 700 units in the Central City West area of downtown Los Angeles, with 640 of the dwelling spaces within Holland Partner Group’s Sofia project at 1120 W. 6th St. and the rest at Lincoln Property Co.’s Seven West complex at 1331 W. 7th St.

Construction also began over the quarter on the adaptive reuse of the 1920s-era Foreman & Clark Building on the corner of Hill and 7th streets. Bonnis Properties of Vancouver, Canada, will convert the historic office property into 125 apartments, according to the report.

A total of 2,156 condominium units were under construction in the third quarter, according to the report. Price per square foot for the dwellings was $679 in downtown, up from $637 in the same period last year.