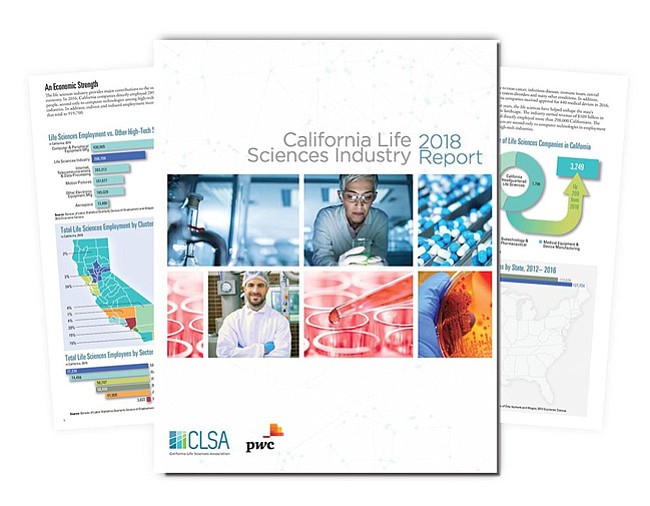 Los Angeles is on the rise and trails only the Bay Area among California markets when it comes to jobs in the life sciences sector, according to an industry report released last week.

The report from the California Life Sciences Association, a biosciences trade group based in San Francisco, was co-authored by PricewaterhouseCoopers. It found an estimated 58,400 people in Los Angeles were employed in an industry sector that includes biopharmaceuticals, medical devices and bioscience academic research.

Los Angeles lagged by some measures – the report found that life science workers in the Bay Area accounted for average yearly income of $118,000 apiece, compared with $114,000 in San Diego County, $89,000 in Orange County and $73,000 in Los Angeles County.

Los Angeles also lagged on job growth in the sector, and remains in third place in terms of venture capital investments in life sciences, although there was strong growth from 2015 to 2016, the period covered in the report.

Meanwhile, two Los Angeles universities were among the leading recipients of NIH funding for life sciences. UCLA this year received $381 million and the University of Southern California received $208 million, according to the report.

The report concluded that the California overall is home to the largest life sciences cluster in the world, and it continues to outpace other states in life science-related economic growth, venture funding and National Institutes of Health research grants.

“The life sciences industry is a shining example of how California is a driver in innovation,” said Gov. Jerry Brown, in an introduction to the study. “The industry, which began just 50 years ago, has made great strides to put California at the forefront of the biotech revolution.”

Biopharmaceutical and medical device employment in California grew 7.7 percent between 2012 and 2016. During the same period, such jobs in New York fell by 2 percent.

Highlights of the state’s $169 billion life sciences market include 299,000 residents directly employed by an industry that pays $113,000 in annual wages, fueled by $6.7 billion in venture capital and $3.8 billion in federal grants, the report said.