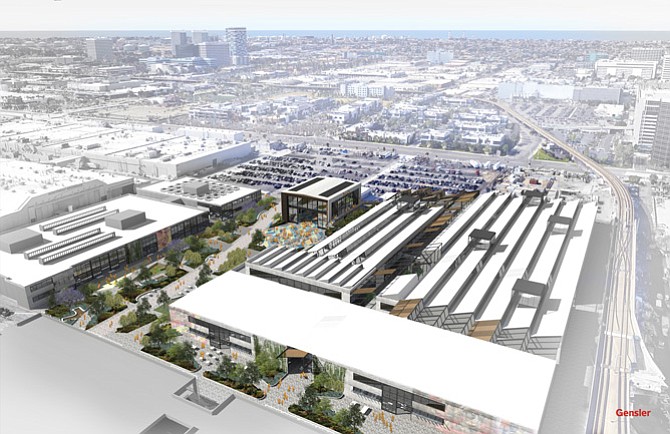 Downtown-based Gensler, a global architecture, design and planning firm, was selected to redevelop a portion of the former Northrop Grumman Corp. industrial site on Douglas Street in El Segundo into a creative office campus, according to the new owner of the property.

Sawtelle-based real estate firm Hackman Capital Partners acquired the 30-plus acre site from Northrop Grumman in October of 2016. Terms of the deal were not disclosed. The campus has four buildings that 550,000 square feet and is located across the street from the Los Angeles Laker’s new practice facility.

The redevelopment project is slated to break ground early next year with delivery in mid-2019, according to the firm.

“We’re extremely enthusiastic to have Gensler be part of the team,” said Bloodgood, a senior vice president at CBRE. “The preliminary designs are very innovative and exciting … it’s a very authentic, historical structure and we think it will be very well received by tenants looking for creative space in the area.”

The property is visible from Douglas Street, with an address at 202-204 Hornet Way, a small offshoot of the larger thoroughfare. It was part of the Northrop Grumman’s 84-acre office, manufacturing and warehouse complex prior to its acquisition from Hackman Capital Partners in 2016. The property is near the Metro Green Line, Metro’s future Crenshaw Line, and the 105 and 405 freeways.

Michael Hackman, founder and chief executive of Hackman Capital Partners, said the project is unique because of its enormous scale and also because of its location in an increasingly active submarket.

A two-story office property at 588 Atlas Street in Monterey Park was recently acquired by In Christ Community Church for $10 million, according to an announcement from downtown-based brokerage CBRE.

The 86,319-square-foot office property recently underwent a $1 million renovation turning the office building into a corporate headquarters facility, according to the brokerage. The building is located in a business park that includes neighbors such as Union Bank, Care1st Health Plan and the Los Angeles County Sheriff’s Department.

The remodel included an expanded lobby, parking lot upgrades, exterior painting and new landscaping, according to the firm. The property features an interconnected glass and steel atrium lobby with windows that wrap around the entire building.

“The church was looking to consolidate a leased location in downtown LA and an owned location in the Mid-Counties L.A. area,” Shaffer said in a statement.

Walnut Place, a 28-unit apartment property with two retail units, at 712 E. Walnut St. in Pasadena, has sold for $14 million to a San Fernando Valley-based private investor, according to Toronto-based brokerage Avison Young.

The five-story property, built in 2004, includes seven three-bedroom and 21 two-bedroom residential units, as well as two retail units totaling approximately 3,000 square feet, according to the firm. The property includes balconies or wrap-around outdoor patios on all units, an interior landscaped courtyard and underground gated parking.

“We are seeing an increasing migration of folks to urban communities that are walkable and have a number of amenities nearby,” Berk said in a statement.