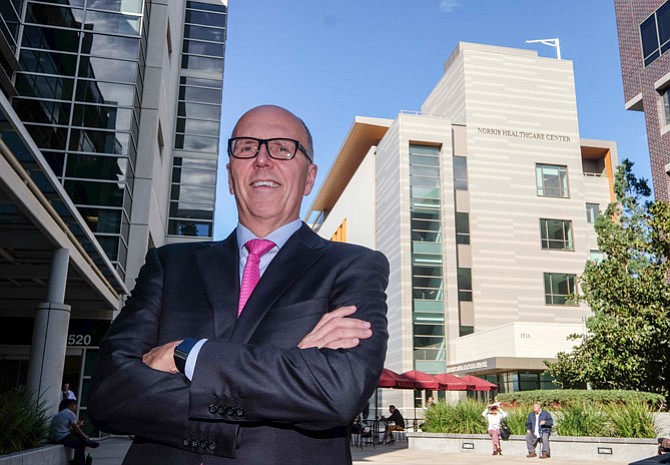 USC President C.L. Max Nikias announced in February a vision for a new hospital at the USC Health Sciences Campus in Boyle Heights, but details on the cost of the project were scarce.

The new facility is on the drawing boards, and will likely replace the 401-bed Keck Hospital of USC and 60-bed USC Norris Cancer Hospital, both just off the 5 Freeway north of downtown.

“I am really excited about the hospital of the future,” Thomas E. Jackiewicz, senior vice president and chief executive of Keck Medicine of USC, told the Business Journal. “We want to have the most technologically advanced patient hospital we can envision. We are looking globally. Robotics from Japan, new designs from the U.S. and Europe – we want to add to what we have today.”

The project will take from eight to 10 years to complete, officials said.

There’s a need for more patient space along with updates to the facility’s medical technology. Keck Medicine of USC, which is a medical enterprise apart from the USC medical school but still under the broader USC umbrella, has seen inpatient hospital visits rise by 70 percent in the past five years, and regularly serves hundreds of thousands of patients.

“For better or worse, we’ve exploded in volume, about 70 percent in inpatient growth since 2012,” said Andrew Stringfellow, USC’s planning director of health systems “And outpatient is growing even more.”

Annual revenue from patients jumped from $500 million in 2012 when Jackiewicz came on board as chief executive to $1.6 billion in 2016. Jackiewicz projected revenues would reach $2.3 billion to $3 billion the next five years.

“As an academic medical center, we’ve become a center of destination,” Jackiewicz said. “We have now become an incredibly important part of our healthcare community – our transfers, our transplants, our specialty care and far-flung healthcare. It comes down to the recruitment of our physicians.”

But such rapid growth doesn’t come without hurdles.

“You don’t go from $500 million to $1.6 billion … without a cultural transformation,” Jackiewicz added. “We’re growing so much, we’re starting to see the pains of growth.”

Stringfellow said some of those growing pains – namely the increased patient volume – would be handled by the just-completed $100 million Norris Healthcare Center – expected to open in January and provide services for cancer patients. The 116,000-square-foot healthcare center, the fourth built on the USC campus in Boyle Heights, contains 46 exam rooms for chemotherapy, breast cancer screening and other outpatient services. The building also houses six operating rooms for outpatient surgeries.

“We’re excited,” Stringfellow said of the facility. “And (doctors and nurses) are excited. Because they’re packed into their current space.”

The crunch on space at the neighboring Norris Cancer Hospital and existing Keck Hospital is a key component in the drive to building the replacement facility, which could see its $1 billion price tag range as high as $1.3 billion, with an eye on upgrades.

A USC Health campus hotel is planned within the next two years, in addition to a biotechnology park.

It’s unclear how the Keck School of Medicine, beset by scandals involving its two past deans, would be involved with the new hospital facility.

His replacement, Dr. Rohit Varma, stepped down as dean of the USC medical school on Oct. 5 after allegations of his sexual harassment and subsequent treatment years ago of a campus researcher.

The university expects to raise the $1 billion to build the new hospital from a mix of sources, according to spokeswoman Meg Aldrich.

“Philanthropy will play a significant role in funding the new hospital, along with cash reserves and third-party lending,” Aldrich said in an email.

USC officials said they hoped to break ground by 2020, and open the hospital by 2027.

“More data. More robotics. Machine learning. More AI. Every room can have the ability to be an ICU,” Jackiewicz said. “This facility doesn’t exist today.”

Jackiewicz is given credit by some for bolstering Keck Medicine’s revenues, patient volume and facility expansion.

The trajectory is familiar for the health care executive. Jackiewicz led UC San Diego Health System for three years before coming to USC and oversaw a major medical facility expansion there, including a $664 million, 10-story medical Center in La Jolla, and a $227 million cardiovascular center.

UCSD Health ranked fifth out of 115 academic medical centers nationwide and the highest in the state, under his tenure, according to the University Hospital Consortium’s 2011 Quality Leadership Awards.

In his last year, the volume of inpatients grew 8 percent.

He vowed to do the same thing at USC.

“The key was in creating a climate of success, about getting people to say, ‘Always yes, always now,’” he said. “Creating a sense of urgency. Fighting a culture of ‘no.’ You’ve gotta get your team to say, ‘Yes, we can do it.’”

It was the first strategic move by USC to create an integrated academic medical center, featuring two acute care hospitals, a medical school and four outpatient offices next to the giant-but-separate Los Angeles County+USC Medical Center.

Jackiewicz then prompted USC to buy the 158-bed Verdugo Hills Hospital in Glendale, while expanding its outpatient clinics to 45 facilities and affiliated hospitals from Orange to Tulare counties.

A robust outreach by USC physicians into outlying counties has spurred patient back to the Boyle Heights campus for specialty care, he said.

“They have a lofty goal,” said Jennifer Bayer, vice president of external affairs for the Hospital Association of Southern California. “It’s very exciting. There’s tremendous demand for new facilities and services. If you build it – they will come.”

Others say that, for health care providers such as USC, most of the profit margin still lies in hospital services.

Hospital services now comprise make up about 40 percent of the market, compared with 80 percent two decades ago, analysts say. Roughly 60 percent is ambulatory care. Los Angeles County, as a healthcare marketplace, has the highest degree of chronic illnesses in the state, with a higher burden of care for health care providers.

At the same time, hospitals have been forced to replace old facilities to make way for new technology, seismic safety upgrades, and consumer expectations for newer buildings.

“The incentive to not build hospitals have slowed,” said Mike Cohen, a health practice analyst and managing partner of PriceWaterhouseCoopers, whose policy precluded him from discussing specific health care systems such as USC. “Even beyond that, there is a natural cycle to replace hospital assets – it’s a good business decision.”