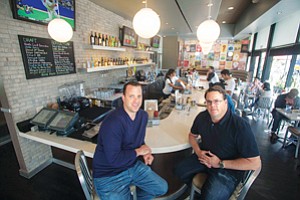 The chains are controlled by Culver City-based CB Franchise Systems and Built Franchise Systems. Those partnerships own three locations, while their franchisees own an additional 41 in the United States and internationally, according to the announcement. The combined 44 stores generated more than $81 million in sales over the past 12 months, said MTY, which has a market cap over $1 billion.

The chains were founded by Jeffrey Weinstein and Craig Albert, who did not respond to request for comment. Weinstein told the Business Journals in a 2013 profile that he started the chain because he was “tired of being told what to order at restaurants.” Albert, a former investment banker, joined the Counter in 2005.

The offices of the two limited liability corporations running the franchises will move to Scottsdale, Ariz., MTY said. MTY’s Kahala Group subsidiary, acquired last year, is also based in Scottsdale. Kahala’s holdings include Pinkberry, Cold Stone Creamery and Baja Fresh, among others.