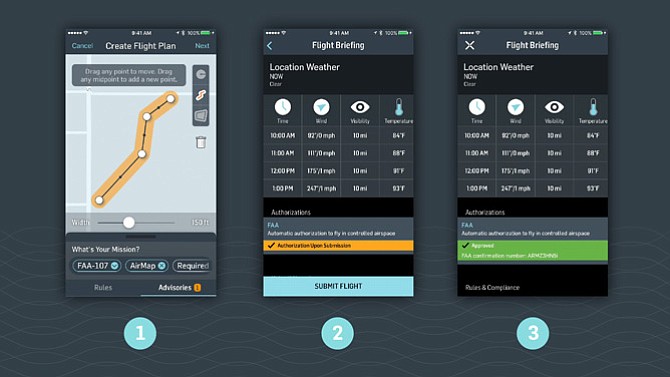 Getting permission from the Federal Aviation Administration to fly a commercial drone within 5 miles of an airport is a tedious process, sometimes taking up to 90 days.

That’s often too slow for drone operators, whose customers frequently demand last-minute service for jobs such as aerial photography or construction site inspection.

The regulatory snarl is especially troublesome in dense urban areas, including Los Angeles County, where large swaths of the region are located near airports. The result is lost business for drone pilots who can’t get authorization to fly.

Software developer AirMap in Santa Monica aims to surmount such challenges with a new feature for its airspace-mapping app. The company’s core product, which launched in 2015 and is free to use, provides drone pilots, as well as those developing drone-related apps, mapping information on FAA-controlled airspace, for example around airports and helicopter pads.

The recent addition to the app allows drone operators to file a flight plan and automatically get air traffic control approval to fly near airports almost instantaneously.

“We are cutting a whole lot of time out of the process,” said Ben Marcus, chief executive and co-founder of the startup, which launched the feature last month. “We are already seeing a lot of benefit coming through various drone operators that are operating commercially.”

The privately held startup doesn’t disclose financials. It’s raised about $44 million since its founding in late 2014, according to venture capital tracker Crunchbase.

An expansion of the program is likely to be rolled out in 2018, the FAA said, but no specific details about local facilities such as Los Angeles International Airport and Hollywood Burbank Airport were available.

AirMap predicts future growth in the drone industry will be robust and cites a study by Association for Unmanned Vehicle Systems International, which estimates that more than 100,000 drone-related jobs will be created nationwide and more than $82 billion in revenue will be generated between 2015 and 2025.

The company does not charge for use of its basic app. It sells data collected through the app’s use and other sources to third-parties. Data categories include local weather, ground obstacles and FAA restrictions.

Marcus said AirMap is positioned to help usher in even more automation in the drone industry by collecting and sharing information needed to facilitate automated drone flights. Many in the industry believe drone flight automation could facilitate the use of drones for purposes such as package delivery and emergency responses.

“We believe that we are on the cusp of a massive transformation in the aerospace industry, bringing the benefits of flight to people in their everyday lives,” Marcus said. “In order for that future to become reality we need to automate the way these vehicles navigate through the airspace.”

The company developed the new feature for its app in collaboration with the FAA’s Low Altitude Authorization and Notification Capability (LAANC) initiative, a data exchange designed to help third-party software developers build applications with the regulator’s data and rules.

Some 12 private partners are approved for the automated waiver program, including AirMap.

The FAA wrote in a notice last month that its partnerships, with third parties such as AirMap, ought to also reduce illegal drone flights in controlled airspace.

“The FAA estimates a minimum of 30 percent reduction in noncompliant operations would result in 450 fewer safety reports over the next six months,” the notice said.

The automated waiver is a first for AirMap, though the company is working on similar features with other countries, said Marcus.

founder of Santa Monica’s DroneBase, an online network of drone operators for hire, said he envisions integrating AirMap’s feature into his company’s software and thinks the automated process will help grow the drone

“I think it will unlock a ton of value across the drone space,” he said, adding his company processes a significant number of drone service requests within controlled airspace. “We want to say yes to every single one of those requests and this will let us say yes to a lot more.”