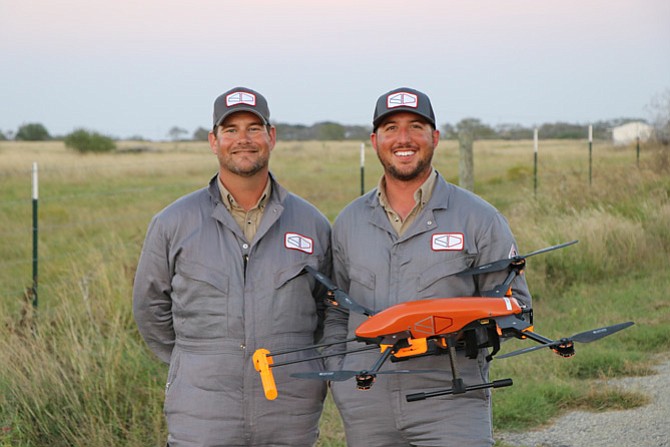 Aubrey, left, and Smith, of SeekOps

SeekOps Inc.’s employees spend a lot of their time sniffing around for problems.

The Pasadena startup manufactures a methane sensor that it attaches to a quad-copter drone and flies over oil and gas fields looking for leaks.

It was founded by a pair of former Jet Propulsion Laboratory employees who repurposed, slimmed down and licensed a methane-detecting sensor that NASA was using on its Curiosity Rover to search for microbial life on Mars.

“What they need on Mars is a lot more sensitive than what we need on Earth,” said Chief Executive Andrew Aubrey, who co-founded SeekOps with Brendan Smith, the company’s chief operating officer. “We take that tech and shrink it to 150 grams” – light enough to easily fit on a commercial-grade drone and be flown around oil and gas fields by the company’s operators.

SeekOps offers survey flights of sensor-equipped drones as a service on a fee basis. The methane-sensing drone can fly up to 35 minutes at a time, long enough to survey most oil fields or production facilities, said Aubrey.

The firm also makes and sells a handheld methane detecting sensor that can be used to detect leaks by engineers on the ground. The 7-person company has raised about $500,000 in seed capital right now, mostly from friends and family, said Aubrey.

The company believes its smart glasses have the potential to address a much larger market than its previous Smart Helmet product, an industrial hardhat with a retractable augmented reality lens that allows workers to view 3-D images overlaid onto equipment to help them with repair and assessments.

“There are a lot more use cases around inspection and design review, where you don’t necessarily need to wear a hardhat,” said Gaia Dempsey, co-founder and vice president of business operations of Daqri. “Some 2.4 million workers merited using the smart helmet. In terms of the glasses, that number jumps to about 100 million in the U.S.”

The smart glasses are lighter than the helmet product and don’t have a thermal sensor, but retain similar computing performance and can be used as safety glasses, said Dempsey.

“The glasses are really lightweight and really comfortable for all-day ware,” she said, noting that the company moved much of the hardware’s guts into a hockey puck sized portable computer which is clipped to a user’s belt. “It’s by and large built on the exact same overall augmented reality platform.”

The similarities between the systems allow users of the hard helmet system to closely collaborate with users of the smart glasses, Dempsey said.

Software developer QLess, which makes a flexible appointment scheduling program, announced last week that it raised a $5.5 million round of capital, which it plans to use to grow its business through marketing and product improvement.

The Pasadena company’s software product puts users in a virtual que and notifies them to show up in-person for their appointment when their place holder approaches the front of the line.

“The average American spends three years of their life standing in a line,” said Alex Bäcker, the company’s founder and chief executive. “We’ve realized that waiting only happens in circumstances of imperfect communications.”

QLess’ communication methods include text messages, app notifications, and phone calls, and promises to save time for line-waiters and businesses alike. Time saved is money earned, argues Bäcker, who said businesses can increase their through-put of client visits and increase customer satisfaction with a system that requires less standing around.

“From the merchant’s point of view, having appointments or fixed visits sometimes cost business,” said Bäcker, noting that appointments often run long or wrap up early. “It’s impossible for an appointment or reservation, made days or weeks in advance, to be precise.”

Customers of QLess include Minneapolis-Saint Paul International Airport, the Chicago Public School District and Renown Medical Group of Reno, Nev., among others.

Moreover, because QLess is able to measure the speed at which customers are being processed it can also predict how many more clients could be seen before an establishment closes, Bäcker said.

“That allows staff members to go home at the end of the day,” he said. “It reduces overtime pay.”