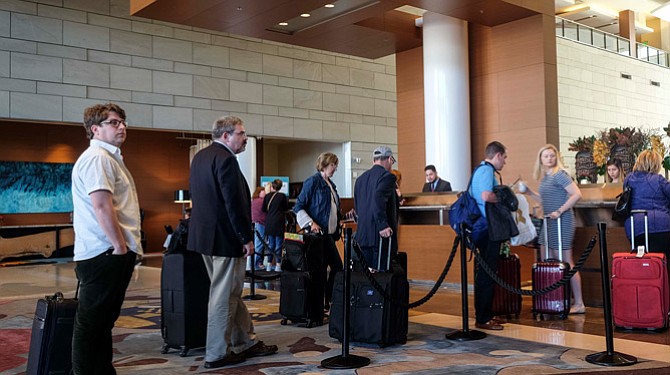 But some worry that could change even as a flurry of new hotels open.

Jeff Zarrinnam, Chief Executive of the Hollywood Hotel, estimated that up until September, his revenue per available room has increased approximately 5 to 8 percent year over year for the past five years or so.

It missed expectations in September, though, and Zarrinnam said it looks the same for October.

“Something is happening,” he said. “This is the very first inkling. It’s going to come, maybe even six months down the road, and other hotels will say, ‘Hey, there’s an effect.’”

Ernest Wooden Jr., Chief Executive of the Los Angeles Tourism & Convention Board, told the crowd at a Central City Association meeting last month that short-term rentals had been helpful in some ways.

“The short-term [factor] is here to stay,” said Wooden. “Our hotels have experienced such high occupancy – in fact, Airbnb is part of the accommodations infrastructure in LA because hotels don’t have room.”

A followup email from Wooden said that Airbnb appeared to have had a minimal impact on hotel occupancy last year. LA Tourism hasn’t yet released its numbers for this year.

“If there was an impact” frmm Airbnb “it would be at the margins,” wrote Wooden. “Fast-forwarding to present day and looking at the influx of new hotel supply in LA, we do expect a short-term negative impact on city-wide occupancy as new hotel supply is absorbed.”

About 17 or 18 hotels are in the pipeline for Hollywood alone, said Zarrinnam, who is the chair of the Hollywood Chamber of Commerce. The increased competition from new hotels and short-term rentals could affect room prices, Zarrinnam said. In addition to record occupancy, last year saw a county record for average daily room rates of $171.95, the highest since 2005, according to data from L.A. Tourism.

Start of the stay

Airbnb first entered the L.A. market around 2008, according to spokeswoman Mattie Zazueta.

While various municipalities in the area have made their own rules, the city of Los Angeles, which includes Hollywood, remains one of few major metro areas which hasn’t set regulations for short-term rentals, although Airbnb recently began paying transient occupancy tax.

The city’s Planning and Land Use Management Committee was supposed to review proposed draft regulations at a meeting last month, but members ultimately instructed staff to do more research on the issue.

Airbnb released a report that same day – commissioned from the Los Angeles County Economic Development Corporation – that about two-thirds of the company’s business is a net addition and doesn’t draw off local hotels. That comes to $608 million annually in economic activity and $24.4 million in state and local taxes, according to the report.

In an emailed statement, Airbnb’s Zazueta pointed to the LAEDC report as an indicator both hotels and short-term rentals could succeed at the same time.

“The billion dollar hotel industry, and everyday Angelenos who earn an average of $8,400 a year sharing their homes on Airbnb, can exist together in LA’s booming tourism economy,” the statement read.

Javier Cano, vice president and market general manager at downtown’s J.W. Marriott Los Angeles L.A. Live, said it had been hard to tell what kind of impact short-term rentals had because of the hotel industry’s recent success. Things might look different if there were an economic downturn, he said.

“The industry is cyclical,” he said. “But we don’t go anywhere. We continue to pay taxes and good wages.”

Cano said that he only took issue with multi-property operators, not people renting a room in their house while they were there.

“For us, I just believe it’s important for everyone to play on a level playing field,” said Cano. “We’re required to adhere to a number of ordinances and regulations. I think if you’re going to be in the lodging business, (you should follow those).”

At the Central City Association meeting last month, which took place at the J.W. Marriott Los Angeles L.A. Live, Cano and others discussed the need for more hotel rooms to be built downtown in order to accommodate larger conventions.

At the meeting, Wooden said he thought there was room for hotels and short-term rentals.

“I think as we grow hotel accommodations availability, (they) will quickly absorb overnight demand,” said Wooden. “I think most people prefer the more traditional environment of a hotel.”

Leaving the regulations unfinished could put a damper on that, Cano said recently.

“Even though hotels are doing well, if we continue to have unchecked growth of short-term rentals, it certainly will have implications for future development,” he said. “I’m concerned about investors if short-term rentals are unregulated or very lightly regulated.”