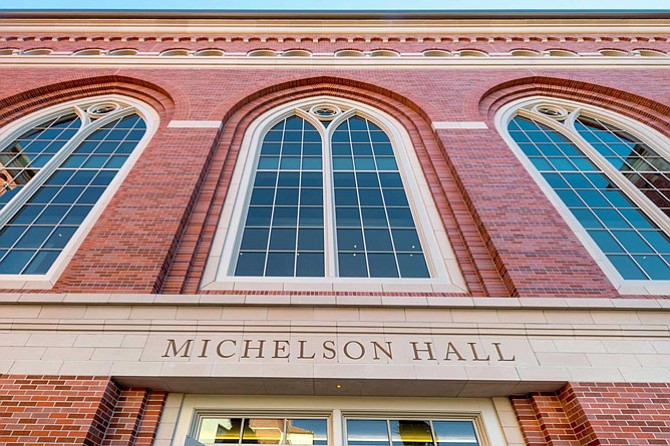 The 190,000-square-foot Michelson Hall, home to a new Michelson Center for Convergent Bioscience, was heralded last week as a milestone for Southern California biotech.

The $186 million center aims to serve as a nucleus for collaborative research, uniting dozens of world-class scientists, engineers and medical researchers under one roof at the University Park Campus for an exponential boost in bio-research power, university officials said.

“Together, Michelson Center researchers will establish a model for innovation in precision medicine that quickly translates from the bench to the bedside in the form of new drug therapies, cures, high-tech diagnostics and biomedical devices,” the university said in a statement.

The new research facility, made possible by a $50 million gift from inventor and orthopedic surgeon Dr. Gary K. Michelson and his wife, Alya Michelson, will now serve as the cornerstone for biotech at USC – and an anchor for a larger initiative for a Southland tech and biotech corridor.

Gary Michelson was No. 39 this year on the Business Journal’s list of wealthiest Angelenos with a net worth of $1.85 billion.

“If you are going to form a global tech hub in the region, you have to pull together,” said Poizner, a former California insurance commissioner and founder of Silicon Valley GPS start-up SnapTrack, in a USC news blog.

Campus administrators have said they hope to stanch the flow of thousands of university graduates hired away by high-tech and biotechnology companies outside of Los Angeles.

Those conducting research inside include biotech maverick Ray Stevens, whose early work led to the development of Tamiflu, a blockbuster anti-viral drug, and cancer moonshot scientist Peter Kuhn, a renowned leader in molecular research.

While the new USC biotech center aims to help turn SoCal into the next tech hub, Cedars-Sinai is opening new medical offices to serve a growing Silicon Beach.

“The new offices are part of our ongoing efforts to bring our doctors closer to where our patients and employees live and work,” Dr. John Jenrette, executive vice president of Cedars-Sinai Medical Network, said in a statement.

The expansion into Playa Vista is the 10th outpatient office by the Cedars-Sinai Medical Group, which now has 190 physicians in 30 specialties in offices in Beverly Hills, Marina del Rey, Westchester and the San Fernando Valley. An 11th office will open this spring in Santa Monica.

The new facility will soon add pediatricians, pharmacists and social workers, along with wellness services by 2019.

The LAC+USC Medical Center in Boyle Heights on Oct. 27 unveiled a $4.6 million renovation of a half-century-old ambulatory care clinic, the largest in Los Angeles County.

The new clinic features 13,000 square feet of open floorspace surrounded by new exam, consultation and group clinic rooms, with new space for patient education and conferences. It serves more than 30,000 patients a year.

“This beautifully remodeled clinic creates a new experience of care for our patients,” Dr. Mitchell Katz, who oversees the L.A. County Health Agency and its Department of Health Services, which runs four county hospitals and a network of outpatient clinics, said in a statement. “It is a perfect example of the transformation we have undertaken in DHS under health care reform to place the patient at the very cent of the care team.”