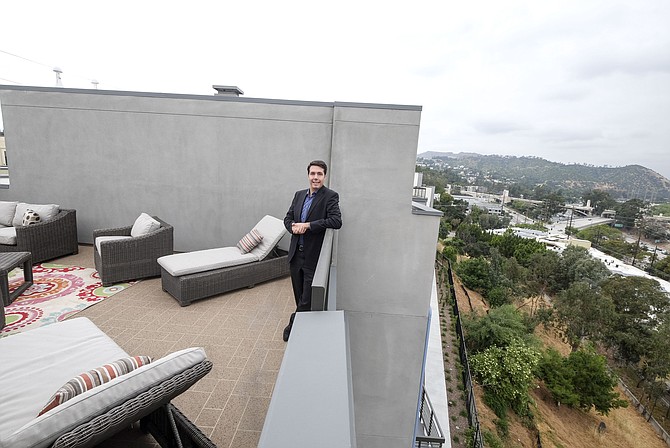 When Jason Damas and his husband, Bob Masys, moved to Los Angeles from San Francisco in December, they joined a growing number of Angelenos that opted to buy a single-family home with a rooftop deck instead of a backyard.

The couple, both in their 30s, has set up a barbecue grill, two couches, and a pair of small tables on the 500-square-foot roof atop their three-story Silver Lake home purchased for more than $1 million in December.

“Our price range would get us either a more standard house that had a yard, but maybe needed a bit of work, or one of these small-lot type of developments that doesn’t have a yard and has that rooftop deck,” said Damas, 36, of the buying options available.

Local developers are turning to rooftop space as a way to maximize real estate square footage at a time when high land costs are making backyards a luxury amenity in Los Angeles. The economic incentives of adding the additional square footage to the roof are compelling, said John Mulville, vice president of consulting at Irvine’s Real Estate Economics.

“A three-story (house) costs more than a two-story structure,” Mulville said. “But that cost is nowhere near as much as the cost of the land (in Los Angeles). If you have to set aside 400 square feet for a yard and nothing is on it, it’s just essentially underutilization of super valuable land.”

“Every single new community I’ve represented since 2015 forward, they’ve become standard,” said agent Tracy Do of Compass brokerage in Beverly Hills about rooftop decks. “(From) 2005 to about 2013, it was a mix between whether builders offered them or not.”

“In order to make it work with higher construction costs and higher land prices, you want to build a denser product in the urban infill locations,” Tourtellotte said.

La Terra built 63 three-story townhomes in Silver Lake that opened in 2015, all of which include rooftop decks with views of the Los Angeles River and the Glendale hills. Those views also come with a premium of 5 percent to 10 percent, or $50,000 to $100,000, Tourtellotte said. The firm is about to start construction on 24 more townhomes in San Pedro with rooftop decks and have more planned in Orange County.

Small lots are a feasible way to build single-family homes in the middle of the city, where land values are high, said Steve Erdman, Canfield’s president. The firm installed barbecues, refrigerators, sinks, and hookups for a TV and hot tub on the roof decks of their latest project, the June Street Collection in Hollywood. The features increased Canfield’s costs per unit by $60,000 to $70,000.

“We could sell it extra for at least double that,” Erdman said.

The homes, which have all found buyers, were listed between $1.3 million and $1.55 million.

Adding livable space on the rooftop can be expensive because the roof has to withstand weather and weight, according to industry professionals. Developers are picky about where to build them, because some markets don’t support the extra cost.

“You have to do a careful dance and analysis where you say, Do we get reward for spending this extra effort? Typically, the answer is yes in L.A.,” said Michael Marini, chief executive of Newport Beach-based Planet Home Living, which specializes in small-lot subdivision homes in Los Angeles and Orange counties.

The premium was worth it to Damas and Masys, who live at Planet Home Living’s Manzanita development in Silver Lake.

“The roof deck sells the whole package,” Damas said. “If you took it away, it wouldn’t feel as interesting.”