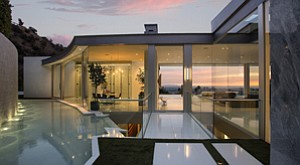 When developer Nile Niami decided to build a $500 million, 100,000-square-foot spec home in Bel Air, he turned to Irish architect Paul McClean, whose contemporary, glass-dominant style has shaped numerous megamansions in Los Angeles. Those include the spec home at 454 Cuesta Way in Bel Air for which Beyoncé Knowles Carter and husband Shawn “Jay Z” Carter reportedly submitted a $120 million bid in April. Calvin Klein purchased one of McClean’s properties in the Hollywood Hills for $25 million in 2015, while Tyler and Cameron Winklevoss, whose lawsuit against Mark Zuckerberg was made famous in 2010’s “The Social Network,” also bought one of his houses in the Hollywood Hills’ Bird Streets area in 2012 for $18 million. McClean spoke to the Business Journal about the Niami home, set to be completed around the end of the year, and issues facing the L.A. housing market.

You have said that the most interesting homes are built in L.A. Why?

When you want to do the type of houses I do, which connect to nature and try to break down the barriers between indoors and outdoors, we’re in the perfect climate for that. We often make our homes with disappearing walls of glass. It’s hard to know when you’re truly inside or outside.

Why would anyone spend $500 million on a home?

If you do houses for sale, you have to create a strong emotional connection that will make someone want to spend that type of money. We use landscaping, water, entry courtyards, bridges – all these types of devices to separate you from the day to day of the city and give you a unique feeling.

Where does most of your business come from?

During the recession, back in ’08 and ’09, we started getting more calls for houses in L.A., and as time went on, that became our biggest market. We do half custom homes and half homes for sale.

Does your vision for a home ever clash with the client’s?

With all our clients – homeowners and developers, they come to us because they like the type of design we do. Otherwise they would go somewhere else. We try and listen carefully to what their own dreams and desires will be. We want it to be about them. Our innate style sensibility finds its way through.

These huge homes, megamansions, have received backlash from local residents and politicians. What do you think about that?

I understand people can be frustrated by the size of homes and neighborhoods being changed. I think it’s a unique situation and should be judged neighborhood by neighborhood.

What do you think about the city’s attempts to crack down on mansionization?

One of the problems with much of the changes to the ordinances is they’re not very nuanced. For example, limitations on grading on certain lots that are very steep and restrictive, and where streets are very narrow, may be easy to understand because of disruptions caused to neighborhoods. In some parts of town, it’s not a problem at all.

How does that affect the homes?

If you don’t do the grading … then you end up with bigger houses that are more visible from the street forever versus a temporary inconvenience for people. If you want to reduce the size of homes, give people different ways to do it or give them flexibility. Often, we get one-size-fits-all policies that don’t work very well on a lot of lots. I think people should be able to build their dreams and do it in a responsible manner.

Do you worry that there will be less work if the housing market comes back to Earth?

It’s a cyclical business. I’m old enough to have been through a couple of these cycles already. The housing market took a very long time to recover. Although the luxury market has been performing very well for quite a few years, the general market has taken a long time to catch up and get to the place it was before the recession. We don’t know how that will affect things going forward.