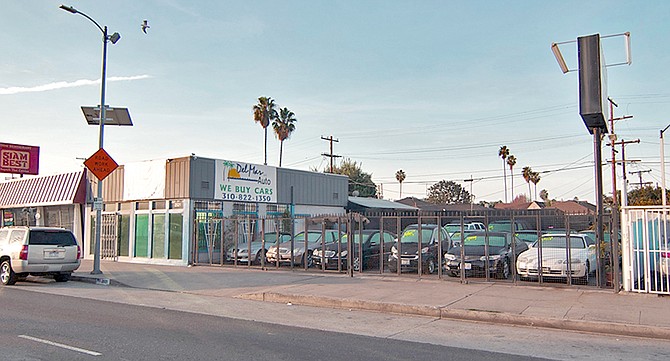 Many Angelenos see Lincoln Boulevard in Venice as a road to the airport – one lined with a hodgepodge of small businesses ranging from auto repair shops to liquor stores.

Chef Kris Yenbamroong saw it as a destination for the next outpost of his Thai restaurant Night + Market, and last year announced plans to take over the former Siam Best restaurant on Lincoln near Washington Boulevard.

This month, he and his father, Prakas Yenbamroong, purchased a lot and small office next door for $2.2 million and plan to use it as a parking lot and office, which sit on 6,221 square feet. Viewed as a land site, the deal value translated to $346 square foot.

The office is 1,611 square feet and leased until next year to a used-car dealership.

Laura Alice Scaturro, an associate at Marcus & Millichap who represented both the seller, Carolyn Kegarice, and the Yenbamroongs, said the lot will give Night + Market a much needed parking lot – and represents their long-term commitment to Lincoln, which is beginning to attract business spilling over from Abbott Kinney Boulevard and Rose Avenue.

While monthly retail rents on Lincoln range from $3.50 to $7 a square foot, rates on Abbott Kinney can run $15 to $20, Scaturro said. In a sign of Abbott Kinney’s rise in prominence, shoemaker Adidas is set to take over the former Hal’s Bar & Grill space.

“There are no independents opening anymore on Abbott Kinney,” Scaturro said. “Where do those independents go? Lincoln is a great place for them.”

A Night + Market representative declined to comment and said the restaurant’s opening date has not yet been set. The restaurant company has two other locations in decidedly swankier areas – the Sunset Strip in West Hollywood and on Sunset Boulevard in Silver Lake.

Kegarice tried to sell the Lincoln property in 2014, but a deal never clicked as several development projects in the area seemed to stall.

Real estate reporter Daina Beth Solomon can be reached at dsolomon@labusinessjournal.com. Follow her on Twitter @dainabethcita for the latest in L.A. commercial real estate news.