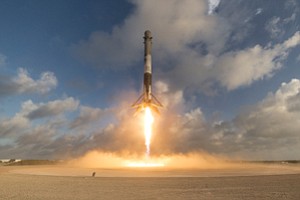 Down to Earth: SpaceX booster rocket descends after launching a top-secret spy satellite this month in the company’s first launch conducted for the U.S. military.

When SpaceX successfully launched a top-secret spy satellite into orbit earlier this month, it proved a triumphant moment for the firm in its years-long battle to win the confidence of the U.S. military and break a decadelong monopoly on defense launch services held by United Launch Alliance.

The event opened up a significant business line for Space Exploration Technologies Corp., Elon Musk’s Hawthorne rocket manufacturer, and gives the company an alternative revenue stream that is immune from downswings in the commercial market and civilian government budgets – a pressing concern as the market for large satellite launches appears vulnerable.

“They will have to look to diversify from geostationary satellites, because there just won’t be as much to launch in three or four years,” he said. “There is a lot of concern in the industry about the decline in satellites.”

Vertically integrated SpaceX provides the cheapest ride into space, but its market is limited to a portion of the roughly 80 to 85 satellites launched worldwide each year for military, government, and commercial uses, said Bill Ostrove, an analyst with Forecast International Inc. of Newtown, Conn. That’s because many countries prefer to launch satellites on homegrown rockets. The U.S. military and commercial satellite operators also don’t like to be locked into contracts with a single launch-service provider – even if that means paying more to support a competitor such as Centennial, Colo.-based United Launch Alliance.

“Half of the commercial market, half of the U.S. civil (government) and military market is the max potential,” he said. “So right now, you are talking about 20 to 25 launches per year.”

The number of U.S. military satellite contracts fluctuates, depending on mission requirements, but on average involves about 10 launches each year, industry observers said. That means if SpaceX wins half of those launch contracts, it could amount to around 25 percent of its total addressable market.

“It’s a fairly reliable market because the U.S. military will (always) launch a certain number of satellites annually,” said Marco Caceres, director of space studies at Teal Group Corp. of Fairfax, Va. “This is a big cash cow.”

ULA, a joint venture of Boeing Co. and Lockheed Martin Corp., maintained a monopoly on U.S. military launch contracts for a decade as the only company certified to launch Air Force satellites. SpaceX sued the Air Force in 2014 for the right to bid on contracts, arguing it could provide launch services for a lower cost and without the national security implications ULA’s Atlas rocket, which uses Russian-made rocket engines.

SpaceX settled its lawsuit in 2015 after the Air Force agreed to make the bid process competitive; the company won an $82.7 million contract last year to launch a GPS satellite for the Air Force in 2018.

ULA opted not to bid, reportedly because it couldn’t compete on price. According to the company’s website, its rival Atlas 5 rocket has been contracted to the Air Force on previous missions for $163 million.

“The concern (with ULA) over the years on the part of the U.S. military was that the price was going up considerably because you didn’t have competition,” Caceres said.

The National Reconnaissance Office announced last year that it had awarded SpaceX a contract estimated to be worth $100 million to launch a spy satellite for the agency, a division of the Defense Department. In March, the company received its second Air Force contract, worth $96.5 million, to launch another GPS satellite in 2019.

The company is not yet able to compete for the U.S. military’s heaviest and largest satellite launches because of the limited lift capability of its Falcon 9 rocket. ULA maintains a monopoly on those flights for now with its heavy-lift Delta rocket, which costs $350 million to launch.

SpaceX aims to break into that market with its Falcon Heavy rocket, which it plans to launch for the first time in late summer. The Falcon Heavy could be certified for Air Force flights within two years, according to industry experts.

“The Falcon Heavy is still a question mark because it hasn’t launched,” Teal’s Caceres said. “Once they get that heavy-lift capability, they can compete fully with ULA.”