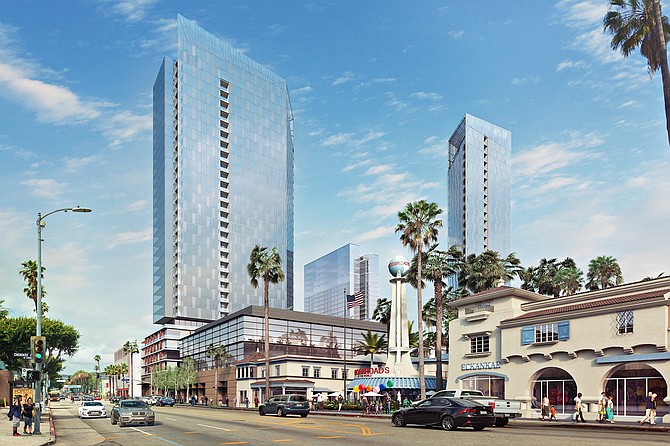 Hollywood’s Crossroads of the World.

A mixed-use development that would be among the biggest in Hollywood history will face public scrutiny with the planned release Thursday of its draft environmental impact report.

Dubbed Crossroads Hollywood, the project aims to freshen up the historic Crossroads of the World site on Sunset Boulevard and construct nine buildings, including three skyscrapers, on several surrounding blocks.

Representatives of Harridge Development Group in Miracle Mile said the city was expected to release the report on its project Thursday morning. The report is available here.

The study would kick off a review process that is sure to ignite debate over competing visions for Hollywood’s growth. If Crossroads is approved, the development would plunk modern buildings into a mostly low-slung pocket of Hollywood, replacing decades-old storefronts, offices, and apartment complexes.

Estimated to cost between $500 million and $600 million, the project spans nearly 8 acres just west of Crossroads of the World, roughly bounded by Sunset Boulevard, Highland Avenue, and Selma Avenue.

The proposal comes as Hollywood experiences a burst of development. Over the next five years, according to Avison Young Principal John Tronson, Hollywood is slated to gain 6,100 apartment units, 3,000 hotel rooms, and 2 million square feet of office space.

Harridge Chief Executive David Schwartzman said he envisions a project of such scale – the largest he’s tackled in his 25-year career – as his L.A. legacy.

“I just had a little child. This is the project that, in 20 years, I want to be able to drive by and say: ‘your dad built this.’” Schwartzman said. “I feel like it’s a civic responsibility.”

However, Crossroads faces a long – and likely contentious – road to approval. Anti-density activists fiercely opposed other giant Hollywood projects – notably the Palladium Residences, Millennium Hollywood, and 8150 Sunset – and filed lawsuits that brought them to screeching halts. A Target store has sat half-constructed for several years, stymied by neighborhood opposition and a lawsuit.

“It’s a very bold endeavor,” Tronson said. “Anything that big typically does raise some red flags to anti-development groups that have been litigating against these big projects.”

Schwartzman said his project should stand up to scrutiny, although it would require a height district change.

“In Hollywood, you always have issues with projects and people complaining, but we’re following the rules. We’re not doing a general plan amendment, we’re providing affordable housing,” he said. “We’ve thought about the needs of the community. At the end of the day, you’re not going to make everybody happy.”