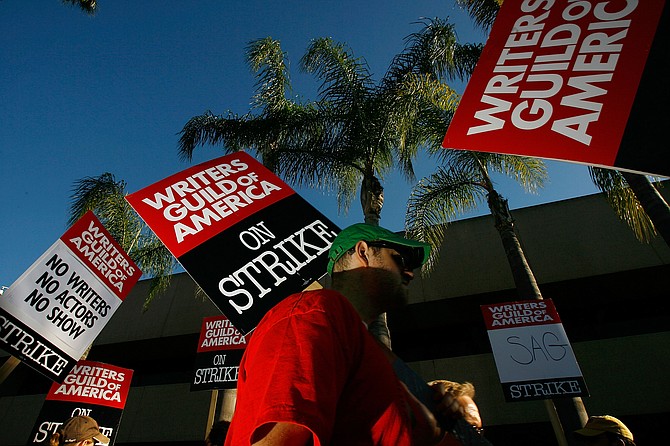 The Writers Guilds of America West and East, and the Alliance of Motion Picture and Television Producers have reached a tentative agreement on terms for a new three-year collective bargaining agreement, averting a possible repeat of the 2007-2008 strike that lasted 100 days and cost the local economy more than $2 billion.

The contract, which the guild said represents a $130 million pay increase for its members, includes gains on what many writers called the most important matter on the table, the issue of short seasons in television. The agreement calls for a definition of 2.4 weeks of work for each episodic fee. Any work beyond that span would result in additional payments.

According to a memo from the WGA negotiating committee, the new contract also includes gains in minimums “across the board,” as well as contribution increases to the WGA health care plan that are expected to keep it solvent.

Writers would also receive a 15 percent increase in pay TV residuals, a roughly 15 percent increase in high-budget subscription video on demand residuals, and residuals for comedy-variety writers in pay TV – a first for the guild, according to the memo. The guild also secured another first-time addition to its contract with producers: job protection for WGA members on parental leave.

In a memo to guild members, the WGA negotiating committee wrote: “Did we get everything we wanted? No. Everything we deserve? Certainly not. But because we had the near-unanimous backing of you and your fellow writers, we were able to achieve a deal that will net this Guild’s members $130 million more, over the life of the contract, than the pattern were expected to accept.”

The producers’ guild has yet to release a statement.

The parties reached the deal in the early hours of Tuesday morning after agreeing to extend negotiations for an extra 10 minutes beyond the Monday midnight deadline. The on-again, off-again talks began in mid-March. The agreement still needs to be ratified by the WGA’s boards.

“The negotiating committee stated to its membership that they were going to do everything they could to avert a strike, but that a large strike authorization vote would be powerful leverage in their negotiations,” Banks said. “What I think this will do moving forward is give members a sense of confidence in their union.”