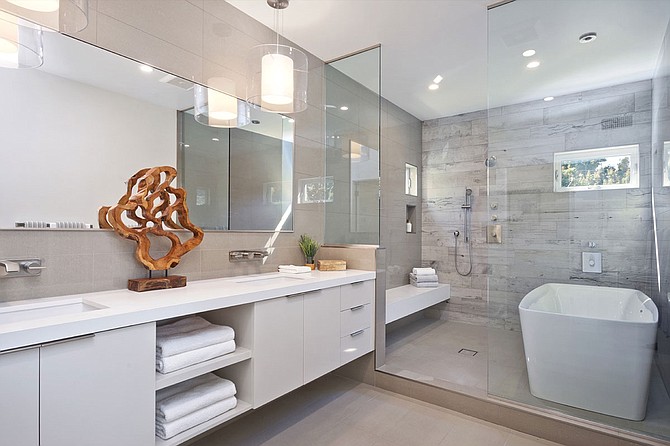 Shower space outfitted with a bathtub.

From his and hers bathrooms to six-car garages, amenities once reserved for the ultrarich have become standard fare in what some call the “middle market” of luxury homes in Los Angeles, ranging from about $5 million to $15 million.

“It’s a routine conversation we have with high-end developers: What am I missing? What’s going to make my house stand apart?” said Jesse Harrison, business development director at Harrison Design, an architecture firm headquartered in Atlanta with offices in Los Angeles. “What’s going to make someone walk in and say, I’ve got to have this house?”

Such amenities are often necessary for projects to justify their asking price, said Hamid Toufanian, a developer, architect, and general contractor in Santa Monica.

“The prices of properties are soaring up,” he said. “And to make a house and sell it with profit, we have to add items of luxury.”

Toufanian is placing an elevator, arts-and-crafts station, dual master bathrooms, gym, wine cellar, and screening room in a home his company, Architecture West Inc., is building in Santa Monica and hopes to sell for just under $9 million.

Attracting wealthy buyers has started an arms race among developers, each one seemingly looking for the next “thing” to set their homes apart.

Harrison said his firm designed a simulated golf range with a giant screen in a custom $10 million Brentwood home for a links enthusiast.

Many of his clients also want full catering kitchens with walk-in refrigerators and freezers. Butler’s pantries that once housed china and silverware are giving way to a “dramatic, beautiful second kitchen” housing a second oven and refrigerator as well as often quirky decorations such as “a crazy wallpaper or funky chandelier,” he said.

“You might find double or triple stoves. You might find different cutting areas,” Loewy said. “In the 1950s, you’d never find a big kitchen. You would never have two stations, because in the 1950s the men never cooked.”

Another new concept Loewy said he is seeing is bathtubs inside giant shower enclosures that allow a couple to shower and bathe together in one space.

There are even luxury amenities for pets.

“We recently saw motion-sensor dog doors in houses so the dog can go outside and relieve itself without you having to open the door,” said Stephen Kotler, western regional president of brokerage Douglas Elliman.

Some luxury amenities have begun to trickle down from the uppermost echelons to more modestly priced homes as the cost of technology falls.

“Now with $5,000 or $10,000 you can have a really nice screening room,” said Hilton & Hyland’s Kramer. “It allows you to take space that was dark and not very useable and turn it into a screening room for not much money.”

“It’s not enough to have a garage with four cars anymore,” he said. “We recently did a very high-end home where the garage became the high-tech man cave fully fitted out with big-screen TVs, and the bar was in the garage along with high-end sound stereo equipment and light.”

Harrison said his firm designed a 65,000-square-foot home in Beverly Park now worth over $150 million “with a shark tank under a glass floor in one room and a lazy river in the backyard. That client had a full-scale model of the city of L.A. under the glass floor in another room. It lit up.”

While luxury residences are increasingly decked out, Marmol said they serve the same fundamental purpose as every other home.

“We can’t lose sight that it is about comfort, connection, family,” he said. “Our experience is that the rich and famous are living just like all of us.”