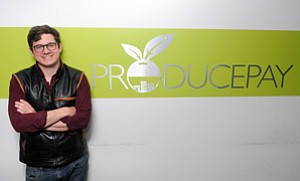 Growing a cash crop requires a lot of cash.

Unfortunately, many farmers find themselves in a cash pinch at the end of the growing season after large sums of money go out the door to buy seed, pay laborers, and repair equipment.

For those who can’t wait to be repaid and can’t cover the cash shortfall with a credit line, downtown startup ProducePay offers an online cash-advance service.

The model could change how small and midsize farms are funded, particularly in developing countries, and it has been getting attention from investors as well. To expand its services to more growers, the company closed a $77 million debt and equity round on March 14.

“These farmers aren’t necessarily bad farmers,” said Pablo Borquez Schwarzbeck, ProducePay’s chief executive and founder, noting that the company’s customers typically have tapped out their borrowing capacity. “For most, it means they’ve exhausted the traditional collateral like farmland and machinery.”

The company uses its internet platform to buy produce at a 1 percent to 2 percent discount on average and give cash advancements of up to 50 percent of the goods’ projected final revenue within 24 hours. ProducePay makes its money back by selling the produce to distributors at market rate.

ProducePay has a network of 50 distributors in the United States, many of whom buy produce from Latin American growers. The firm built its network of distributors and growers by inserting itself between existing farmer-distributor relationships as a financier whose cash advances ease the process of going to market.

“For the most part, we work with the distributors that the farmers already have preexisting relationships with,” Borquez Schwarzbeck said. “However, for a significant part of our deals we refer them to new distributors with whom they connect and trade.”

Many in the produce industry say ProducePay’s service could be particularly valuable to growers in Latin America where credit is less available to farmers.

“Banks are very reluctant and unable to lend to rural businesses or farms. These businesses are too risky or too remote,” said Matt Foerster, manager of market development for nonprofit farm lender Root Capital of Cambridge, Mass. “There is a massive gap – and opportunity – between what’s there and what is needed.”

Borquez Schwarzbeck said about 60 percent of the firm’s revenue comes from Latin America, mostly from Mexican growers, and 40 percent from growers in the United States. But he insists that cash advancements are well-suited for the U.S. market.

“The U.S. bank loan portfolio is less than 1 percent in farming,” he said. “Traditional financial institutions are not dying to work with farmers and that’s left the traditional Joe Farmer underserved.”

“I come from a fourth-generation farming family in northwestern Mexico. My family started in grapes,” he said. “I learned everything from my father.”

Armed with an MBA from the Johnson Graduate School of Management at Cornell University, Borquez Schwarzbeck, 31, said he saw an opportunity to finance farming operations.

ProducePay was founded in 2014 and has raised more than $83 million in debt and equity. From its most recent round, the firm plans to dedicate $70 million to financing cash advancements and $7 million to hiring additional staff. New York’s CoVenture led the most recent round.

The platform has attracted 120 farming customers and 50 distributor partners. The firm generated $157 million in revenue in 2016, said Borquez Schwarzbeck.

The average contract the firm advances cash on is $4 million, he said, which is the typical annual revenue customers have.

“We tend to want to get the money out in the first half of the season,” Borquez Schwarzbeck said. “At about two-thirds of the season is where we get our money back.”

Yet, while cash advancements might prove useful to some farming businesses, especially those without credit options, others might stick with traditional financing routes, said Emiliano Salcido, general director of Master’s Touch, a San Diego grower-distributor of perishable produce.

“We are not a company that can rely on those because those advancements are quite expensive for us,” Salcido said, adding that he is friends with Borquez Schwarzbeck, but that a 1 percent or 2 percent discount over several months would compound to an annual interest rate much higher than his company’s available credit lines.

“It’s something that might help small (and) medium-sized growers to move ahead and ease some of their cash-flow needs,” he said.

Advancing cash payments to farmers isn’t new. It has been a service many distributors offer farm customers, Borquez Schwarzbeck said. However, distributors are not well-equipped to lend cash to customers off their balance sheets.

“These guys don’t like to do this because their job is to fill produce,” he said. “You’ve got a lot of distributors who may go out of business because they may make an unwise investment choice.”

In the place of a distributor, Borquez Schwarzbeck said, ProducePay can make cash advancements and more consistently get repaid through its own crop due diligence and price-projecting technology. The company predicts future prices for reselling goods using a collection of data points pulled from sources such as distributors, market indexes, and the U.S. Department of Agriculture.

“The technology we’ve built over the last three years has given us the ability to price these (produce commodities) in real time,” Borquez Schwarzbeck said.

Being able to more accurately speculate on future prices would allow the company to reduce the risk of not getting its money back when it goes to market, said Dan Sumner, director of the Agricultural Issues Center at UC Davis.

“If these guys can have a better handle on what the price will be like three weeks from now, that will allow them to be in a better position to price the loans,” he said.

“It creates a huge advantage for the service, and it was something our investors initially loved,” he said. “It was something that helps us structure the business the way it is.”

Despite those advantages, ProducePay will have to beat banks at their own game, UC Davis’ Sumner said.

“The successful banks know the industry and have been in it for a long time,” he said. “The question is: Are they a better bank than the other banks?”