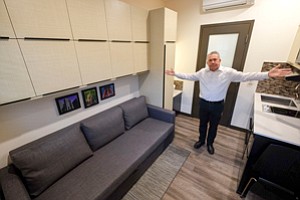 “People did not want anything to do with this,” said Naty Saidoff, founder of Capital Foresight, a Beverly Crest development firm. “Nobody knew what they could do with such a small building.”

His solution was to stay small. Capital purchased the Mikado for less than $1 million in 2013 and reopened the Japanese-themed property this month with 42 mini-apartments.

Each is about 150 square feet, the size of a large walk-in closet, and outfitted with a sofa bed, kitchenette, and bathroom. Apart from eight units set aside as Airbnb rentals, almost all have been leased in the past few weeks.

“It was a big experiment and it seemed to pay off,” said Bill Lindborg, Capital’s development coordinator. “There’s a diverse need for different types of housing in downtown. … There’s a lot of pent-up demand.”

Those rents are just a bit cheaper than typical studios in the neighborhood, while offering Capital an enormous premium on a per-square-foot basis.

The ability of developers to earn high per-square-foot values while offering less expensive alternatives to traditional apartments is prompting speculation among real estate professionals that a possible boom in micro-unit construction could be on the horizon.

But only a few L.A. projects prominently advertise micro-units, typically defined as no more than 350 square feet, or slightly larger than a single-car garage.

Whether or not tiny apartments take off, putting them in Little Tokyo makes sense because it is a desirable location, said Derek Wyatt, president of real estate advisory firm Robert Charles Lesser & Co. The area is crammed with eateries and sits within walking distance of public transit hubs.

“Location is a key driving factor for where and why you should be developing micro-units,” he said.

The Mikado also offers a significant discount compared with other local apartments, even if the units are substantially smaller.

“With rents continuing to increase, some people are potentially priced out of a one-bedroom,” Wyatt said. “There may be people who are more lifestyle oriented, who would rather live in a community that offers a wide array of amenities, or be located in urban environments.”

Capital’s Saidoff, 63, who drew inspiration for the project from growing up on a communal kibbutz in Israel, said millennials want a lifestyle of togetherness while being able to hang on to their privacy.

“It’s the trend of the future and nothing is going to stop it,” he said. “They have everything that’s necessary for someone to live without any extra clutter or space.”

The Mikado, built in 1914, is the latest in a string of downtown adaptive reuse projects for Capital.

The firm converted the Max Lofts, Garment Lofts, and Binford Lofts, and owns the Santa Fe Lofts. It also owns the 819 Mateo creative office building and the Title Insurance Building annex in the Historic Core, which it plans to lease to a hotel operator.