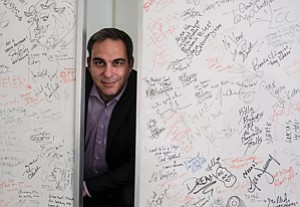 Signing Up: Plus Capital’s Adam Lilling. Photo by Ringo Chiu.

Celebrity entourages have grown a little bigger in recent years.

Beyond the managers, entertainment lawyers, and agents, tech investors have become celebrities’ latest groupies – or is it the other way around?

“When Dr. Dre made more off Beats than he made off his music career, I think a lot of people are thinking, Wow, I could do that,” said Courtney Reum, managing partner of M13, a Beverly Hills venture capital firm launched last year that occasionally brings along celebrity co-investors such as Demi Moore and Tobey Maguire.

“If you are an athlete or singer, and you are retired, it’s the next best thing besides selling real estate,” said Reum, a former investment banker at Goldman Sachs who co-founded the company with his brother, Carter.

“I do think there are more (celebrities) that are more committed than ever to learning the craft and doing it the right way,” Reum said.

Another prominent example of this growing cottage industry is Plus Capital of Culver City, which counsels two dozen celebrities, including Kevin Spacey, on tech investments. The firm helps stars navigate the world of tech startups by coordinating term sheets, brand management, and pet causes.

Plus takes a percentage of any profits made on investments, similar to the way agents, managers, and attorneys earn income from talent, said Chief Executive Adam Lilling, who added fees typically fall between 5 percent and 15 percent.

The key to making this business model work has been winning the trust of Hollywood’s traditional gatekeepers, Lilling said.

“There’s a force field around a celebrity and a lot of time the only people who get through are the con artists, crazy people, and the hair stylist’s best friend’s cousin,” he said. “We are like Switzerland. We have built key relationships with many business managers, managers, and lawyers in this town.”

Perhaps owing to the region’s connection to the entertainment industry, investors with star power are just part of the venture capital business in Los Angeles, Paige Craig, managing partner at West Hollywood’s Arena Ventures, said in an email.

“In many cases a traditional angel, seed fund, venture fund, or strategic investor will bring the celebrity investor to the table,” he said.

Craig explained it’s a deal-sweetening tactic that has been used by a variety of local agencies that have venture arms, including United Talent Agency and Creative Artists Agency; angel investors Kevin Gould and Troy Carter; as well as Crosscut Ventures, Sound Ventures, and his firm.

(Leto’s) spent years going to Silicon Valley and talking to companies, putting in the time,” he said.

Despite the growing interest to back the next unicorn, Lilling said he’s wary of reckless enthusiasm from celebrities and doesn’t encourage clients to put excess amounts of capital into high-risk investments. The majority of Plus clients put in $50,000 to $250,000 of their own money on a deal, according to Lilling, who said he’s especially cautious of investments in which celebrities put up more than $500,000.