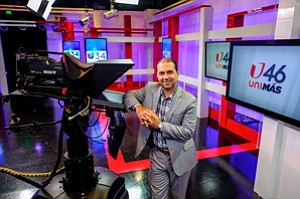 TV executives said young bilingual Latinos are not necessarily looking to watch entertainment in English, but crave more modern stories and formats – often about life in the United States – compared to the nostalgic tales that might appeal more to their immigrant parents or grandparents.

“Whatever we’re programming in the United States has to be a lot more culturally relevant,” said Luis Patino, president of Univision Los Angeles. “The audience is in many cases bilingual and bicultural, and wants to watch more good content.”

What happens in this local battle is of prime importance to both companies because Los Angeles ranks as the No.1 Hispanic television market, according to Station Index broadcasting information guide.

Patino said the May sweeps represented a major prime-time programming shift away from old-fashioned telenovelas to shorter series.

Both Univision and Telemundo are forging partnerships with global entertainment companies as part of that shift in fare focus.

KFTR’s first-time move into the No. 2 slot, beating KABC (Channel 7), was in part fueled by a ratings infusion from the historical series “Moises y los Diez Mandamientos,” or “Moses and the Ten Commandments,” a lavish drama produced by Brazil’s Rede Record TV network. KFTR aired two seasons of the popular series back to back from July 11, 2016, to June 12.

While the story of “Moises” is timeless, the network is also aiming to produce more shows about the here and now. For example, Univision’s “Vino El Amor,” a series about an immigrant family in Napa Valley, premiered in October.

Univision has also made a push onto online streaming networks as a way to increase brand awareness among millennials. The high-profile series “El Chapo,” about the infamous drug kingpin, premiered on Univision in April with episodes debuting on Netflix last month. Netflix co-produced the series with Univision Story House, an L.A.-based unit launched last year to create content in both English and Spanish for the company’s networks and others.

The broadcaster’s “La Piloto,” a crime drama about a former stewardess who learns to fly a plane and becomes a drug runner, comes from W Studios, a joint venture between Univision and Patricio Wills, a former Telemundo Studios president-turned-producer. The unit’s goal is to create edgy content primarily for prime-time broadcast on UniMás stations.

Global entertainment giant Endemol Shine Group, whose North American headquarters are in North Hollywood, is also developing projects with both Univision and Telemundo.

While neither Univision nor Telemundo has given up on the telenovela genre, both companies are introducing series that are shorter and more topical while providing story arcs that older telenovelas might not offer.

Telemundo executives said new series are more likely to run 60 or 70 episodes rather than the 150 or more for traditional telenovelas. Telemundo has trademarked the term “Super Series” to describe the genre.

Celia Chavez, general manager of KVEA, cited 67 percent audience growth for the station's local news broadcast since 2016 as evidence of its success. She also highlighted June 20’s fifth-season premiere of Telemundo’s Emmy-winning series “El Señor de los Cielos,” or “Lord of the Skies,” a telenovela about the life of former Juarez cartel leader Amado Carrillo Fuentes. The show, a co-production with Caracol TV of Bogotá, Colombia, and Mexico City’s Argos Comunicación, was the most-watched Spanish-language prime-time show in the 18-49 demographic in Los Angeles and other primary markets during May, beating Univision’s “La Piloto” at 10 p.m.

“The Telemundo story has been evolving for many years now,” she said.