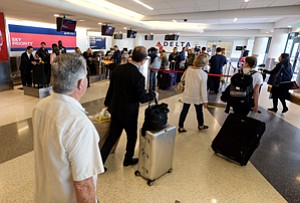 Flying High: Travelers check in at an LAX terminal of Delta Air Lines, which was the No. 3 carrier last year at the L.A. area’s four airports with 13.7 million passengers. Photo by Ringo Chiu.

Los Angeles International Airport continues to lead as the nation’s top origin-and-destination airport – the busiest facility when it comes to passengers who are residents or visitors as opposed to fliers passing through on the way to somewhere else.

That’s one byproduct of a hot streak that saw overall passenger traffic at LAX grow at double the national rate last year.

LAX had 80.9 million passengers in 2016, according to Los Angeles World Airports, which included 52.8 million origin-and-destination passengers, according to Denver-based aviation consulting firm Boyd Group International. It’s a new record and the first time the facility topped the 80 million mark.

Atlanta’s airport has long been the busiest in the United States, and had 104.1 million passengers last year. Only 36 million of them counted the Atlanta market as home or their destination, however – a circumstance that owes in large part to the facility’s role as an operational hub for Delta Air Lines and several other air carriers.

“In many cases, passengers are not choosing to fly to Atlanta; rather, the airlines direct them there to connect to other flights,” said Michael Boyd, president of Boyd Group International. “That’s not the case with Los Angeles. By far, more passengers are choosing to fly to and from LAX than any other airport in the country. It’s largely because they want to be in L.A.”

Last year’s performance at LAX was no fluke. The facility has posted a 21 percent boost in passenger count in the five years since the market began to take firm steps toward recovery from the Great Recession.

The rate of passenger growth when combining LAX traffic with several smaller airports in the area – Long Beach, Hollywood Burbank and Ontario International airports – is a tad higher, at 22 percent.

The pace continued in 2016, when passenger counts at the four L.A.-area airports rose about 7 percent, led by an 8 percent jump in passenger traffic at LAX.

LAX continues to post gains this year, with its total up 5.7 percent through April compared with the same period a year earlier.

A booming tourist market that saw a record 47 million people visit Los Angeles County last year helped boost airport traffic, and so did a robust economy at home that left local residents with more money in their pockets to travel.

The combination propelled the growth of passenger traffic at the region’s airports at rates far above the national average – a trend reflected in the Business Journal’s annual list of the top 25 airlines by combined passenger traffic at the four commercial airports here. The top 25 airlines reported a cumulative 84.5 million passengers in 2016, up 7 percent from 79 million passengers in 2015.

Counting all airlines, the four airports reported a total of 92.1 million passengers in 2016, up 7.7 percent from the previous year. Leading the way was LAX, which grew 8 percent as the number of passengers topped 80 million for the first time.

(This is the last year the Business Journal will include Ontario International Airport in its research; the facility is located in San Bernardino County, and late last year became an independent entity after decades of control by Los Angeles World Airports, the city agency that also operates LAX.)

The local passenger traffic growth was well above the national rate of 3.8 percent last year reported by the U.S. Bureau of Transportation Statistics.

The strong growth in passenger traffic at LAX vaulted it from No. 7 to No. 4 on the 2016 list of the world’s busiest airports, according to an annual compilation by Airports Council International of Montreal. The only airports around the world busier than LAX last year were Atlanta, Beijing and Dubai.

“The airports around Los Angeles – especially Los Angeles International – have been strong performers,” Boyd said. “It’s all because of the region’s strong economy and increased demand (among tourists) to come to Los Angeles.”

Boyd said he does not expect the hot growth rates to last much longer, however.

“You can’t keep growing at 7 percent or 8 percent indefinitely,” he said. “The overall travel demand just isn’t that high. So I would expect (passenger) growth rates to moderate a bit at L.A.-area airports over the next few years.”

The top five airlines by passenger traffic at the four L.A.-area airports remained largely unchanged on this year’s list from last year, with one exception: No. 5 Alaska Airlines saw an 85 percent jump in passengers to 7.6 million in 2016 as the company completed its merger with Virgin America (No. 7 on last year’s list) late last year.

“These are really important destinations for the L.A. basin customer,” he said.

Kirby said the strong growth in passenger traffic at L.A.-area airports is due in part to a healthy mix of business and leisure flights.

“We call it ‘bleisure’ flights,” he said.

No. 1 American Airlines posted 9.5 percent growth in passenger traffic to 17.1 million at the four airports, for a market share of nearly 19 percent.

Spokeswoman Katie Cody said in an email that over the past 18 months, American added 24 flights out of the five Southern California airports, including John Wayne Airport in Orange County, which is not part of the database for the Business Journal list. Among the new nonstop destinations served from the local airports: Sydney and Beijing.

“We are continuing to deepen our commitment to the L.A. market,” Cody said.

No. 3 Delta, which grew 5 percent to 13.7 million passengers, has also added flights over the last two years – 16 out of LAX alone, according to spokeswoman Liz Savadelis. The number of seats on Delta planes serving LAX has increased 25 percent since 2014.

“Delta now offers nonstop service to 22 of the top 25 largest domestic markets from LAX (up from only nine in 2009), and we serve more Latin destinations than any other carrier,” Savadelis said in an email.

No. 2 Southwest Airlines, which grew nearly 9 percent to 15.1 million passengers, has the most distribution of flights around the local airports, with 130 a day at LAX, 55 a day at Burbank, 33 at Ontario and five at Long Beach, according to Zach Mensen, manager of business development at Southwest.

“Southwest’s approach to offering service from each of the airports in the L.A. basin enables us to achieve a market-leading share position and success comparable to, and in some cases surpassing, other major metro areas where Southwest has a large presence,” Mensen said in an email.

The major airlines operating at LAX have added hundreds of daily or weekly flights over the past year.

“Every major carrier has been adding capacity to LAX,” Alaska’s Kirby said.

He said airfield and gate operations have begun to be constrained, making it more difficult to operate at the airport.

“There’s just so much gate space and tarmac space for all these additional flights,” he said.

Some space has been freed up through a massive airline relocation that wrapped up last month. But the major relief won’t be coming until more gates open. The first major set of additional gates is set to come on line in two years with the opening of the midfield concourse for international flights connected to the Tom Bradley International Terminal.

The airlines are also pouring billions of dollars into renovations at each of the other eight terminals. Some of those renovations include the addition of a few gates.