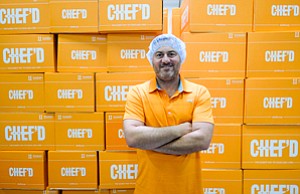 On Way: Kyle Ransford at the El Segundo headquarters of Chef’d. Photo by Ringo Chiu.

Chef’d, which has raised more than $37 million since its founding in 2015, will use the money from the latest round – which came last month – to double its workforce of almost 300 and build out the company’s ordering platform to better understand customer preferences, said founder and Chief Executive Kyle Ransford.

“They really see the future of food like we do: online, fresh, personalized,” Ransford said of his newest backer, noting that the Camden, N.J.-based publicly traded company has built up its fresh-food division in recent years, including its 2012 acquisition of Bolthouse Farms, one of the country’s largest carrot sellers, for $1.55 billion.

Campbell’s latest deal should help it understand the new food economy and give it access to Chef’d’s delivery services, said Mark Alexander, president of the soup giant’s Americas Simple Meals and Beverages unit.

“We see a major shift happening in terms of how the consumer is going about getting food, and that shift is happening online,” said Alexander, highlighting online groceries and meal kits. “We’re participating in a number of areas, but we really saw Chef’d as an excellent strategic partner that will allow us to accelerate our activity, testing and experimenting.”

Meal kit companies – outfits that mail premeasured ingredients for specific recipes – have been on the rise as a way to satisfy customers’ demands for fresher food while eliminating a trip to the store and some of the preparation. New York-based Blue Apron Holdings Inc., one of the biggest in the niche, filed for a $100 million IPO this month.

Various recent deals illustrate how big food companies are trying to get a cut of the online grocery action, said Rich Grant, managing director at Touchdown Ventures in Century City, which manages venture capital funds for companies including Kellogg Co.

“It seems that Campbell, a lot of the larger (consumer packaged-goods) companies (and) grocers are really trying to tap into e-commerce,” said Grant. “They view it as having big potential. There is and will continue to be more of a shift online.”

Campbell, which has seen declines in revenue and earnings in the last two years, nonetheless remains close to $8 billion in annual sales. It started Santa Monica-based venture capital firm Acre Venture Partners with a $125 million investment in 2016 with the goal of investing in food startups that are looking to shake up the market. The parent company, meanwhile, invested in Chef’d because it has sold and may continue to sell its products through Chef’d, according to Alexander.

Ransford said that most of the major consumer packaged-goods companies have sought out his company, which sells meal kits under other brands’ names as well as its own.

Blue Apron and other meal kit companies sell subscriptions for their own predetermined meals.

Campbell targeted Chef’d in part because it allows customers to order individual kits without signing up for a subscription, Alexander said.

“They actually inventory their ingredients,” he said. “They’re not just curated meals. They can respond much more flexibly.”

Chef’d already sells meal kits for companies including Hershey Co. and Pepsico Inc., such as a chocolate-chip cookie kit with Hershey’s chocolate morsels. It had been working with Campbell on a potential similar setup prior to the investment, according to Ransford.

Campbell Chief Executive Denise Morrison approached him about investing after the partnership began, he said.

New York-based online grocer Fresh Direct, which began selling Chef’d’s kits in 2015 and participated in a Series A round, invested its pro rata shares into the latest B round, said Ransford, who added that a third investor might be joining.

He declined to share financial figures but said revenue has risen five-fold over the past year.

Ransford, 45, was checking out at a dish in a food magazine when he had the idea for Chef’d.

“I was looking at Bon Appetit and said if someone brought me these ingredients, I’d be able to do that in my kitchen,” he said. “No one else is doing it, so I guess I’ll have to do it.”

Ransford didn’t have a background in food. He founded El Segundo real estate investment firm Cardinal Investments, where he remains a general partner, in 2001, and El Segundo’s Bank of Manhattan in 2007. Bank of Manhattan, where he served as chief executive, was acquired by Irvine-based Plaza Bank in June 2015.

His experience building companies allowed him to scale Chef’d quickly, he said.

Ransford said he provided all of Chef’d’s seed money, but he declined to say how much.

Chef’d prepares meal kits in one of its three manufacturing facilities, which include one in El Segundo and two in New York, Ransford said. The company uses third-party shipping companies, including FedEx and On Trac, to deliver meals in insulated packaging to customers. Shipping tends to take one to two days, depending on the time at which an order is placed.

Food itself is the greatest expense, according to Ransford, who said the company gets its ingredients from about 60 suppliers. Shipping is also significant, however, as it is for most meal kit delivery companies.

Chef’d allows customers to order a single kit, which might cost as little as $10, but the company charges $10 to ship orders under $40. Blue Apron, in comparison, offers free shipping, but requires customers to sign up for weekly delivery of three meals, which include portions for two, for $59.94.

Chef’d meal kits come with a minimum of two portions, the same as Blue Apron.

Selling a meal kit for one doesn’t make sense based on the cost of preparation and delivery, said Ransford.

Chef’d’s branded meal kits include offerings from 125 brands, among them Hershey, The New York Times, certain celebrity chefs and various diets such as Atkins, so prices vary. A Chef’d-branded kit for barbequed ribs with mustard slaw and spiced green beans for two sells for $26.

Some analysts have questioned if the meal kit delivery model is sustainable given the high costs of customer acquisition. SpoonRocket, a Berkeley startup that raised $13.5 million, filed for bankruptcy last year, saying it didn’t have enough money to compete with better-funded competitors.

Chef’d’s customer acquisition cost, in contrast, is in the teens, said Ransford.

The company has been able to keep marketing costs low by relying on its branded partners to attract customers, said Algazi.

“They’re leveraging other brands’ equity to acquire customers,” he said. “The reason why Chef’d is able to have such a low acquisition cost is because of their relationship with established brands.”

Someone looking at a New York Times recipe online, for example, might be directed to Chef’d, since the paper has a line of branded meal kits.

The company’s branded partners get a cut of sales of their meal kits, Ransford said, and they also get to promote their brand.

The downside, Algazi said, is that relying on others’ brands keeps the company from building up its own equity, potentially reducing Chef’d’s valuation.

Chef’d also sells its meal kits in certain retailers, which the company plans to do more of, Ransford said.

A request for comment to Fresh Direct wasn’t returned.

The line between online grocery and meal kit delivery will be blurred as each branches out into the other to increase market share, said Touchdown’s Grant.

“While today it’s segmented, I could envision a future world where all these things bump up against one another,” he said. “We haven’t seen it yet, but it’s still early.”

The space is big enough that there is room for multiple winners, he said.

Whether Chef’d is one depends on the quality of the experience it provides to customers and keeping customer-acquisition costs low, Grant said.

“Those are all potential options down the road,” he said. “We want to see how things develop.”