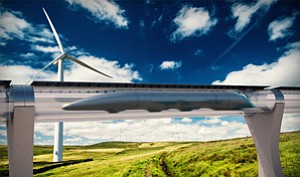 Hyperloop Transportation Technologies has announced new partnerships with South Korean entities as it moves forward on its plans to implement its patented technologies in South Korea.

The company signed agreements with the South Korean government’s department of technological innovation and infrastructure, the Korea Institute of Civil Engineering and Building Technology, as well as with engineering research school Hanyang University, according to a statement released Tuesday.

Playa Vista-based Hyperloop Transportation Technologies was founded in 2013 after Tesla Motors and SpaceX Chief Executive Elon Musk released into the public domain a white paper detailing a theoretical vacuum transportation tube, or hyperloop, that could transport passengers at 800 mph. The entrepreneur opened the conversation but left the building up to others.

Hyperloop Transportation is one of the companies trying to make Musk’s vision a reality. Downtown’s Hyperloop One and Arrivo are two of its local competitors.

Hyperloop Transportation is creating and licensing technologies and has commenced construction of the world’s first passenger Hyperloop capsule, according to the firm.

Chief Executive Dirk Ahlborn said South Korea represents the company’s first commercial customer. The country has completed initial research and is now working on the implementation of the transportation system.

“When you’re building a completely new mode of transportation, the most difficult part is getting regulations approved,” Ahlborn said. “If you don’t have the government actively supporting you, it could take decades to move something commercially, so it’s a really important milestone for us when we work with a new government.”