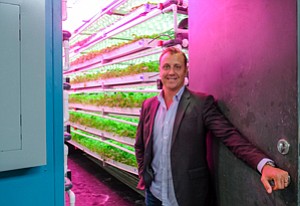 Cropped In: Brandon Martin inside one of Local Roots Farms’ shipping containers that has been adapted for growing food. Photo by Ringo Chiu.

Local Roots Farms has been sowing more seeds in Vernon’s industrial landscape in a move to grow its unusual approach to agriculture.

The indoor farming company, which designs, builds, and operates indoor growing centers, called TerraFarms, made from 40-foot-long shipping containers, last month signed a lease for a 60,000-square-foot facility about two miles from its Hampton Street headquarters.

The larger footprint is expected to set it up for an East Coast expansion, one that would send its year-round indoor farms to cold climates, circumventing traditional produce-supply chains.

“We are not only growing food for the L.A. region, we have plans to sell our food all over the country,” said Brandon Martin, vice president of business development.

It has thus far built eight TerraFarms, and plans to increase that number to 48 with the expansion. Of those, 25 would be deployed to Washington, D.C., in the next six to 12 months.

The production output of one TerraFarm is equivalent to 5 acres of agricultural land, and crop yields take a much shorter time, Martin said.

A single TerraFarm harvests about 4,000 heads of lettuce every 10 to 12 days and grows a seed to a full head of lettuce in 30 days, he said. Conventional outdoor farming takes 60 to 70 days and can be delayed by weather conditions.

The company calls itself an agriculture business where its produce, and not its technology or containers, are for sale.

“We are in the business of growing and selling healthy food,” Martin said. “What we do will provide fresh produce year-round to food deserts and cold climates.”

In the L.A. region, the company supplies to local restaurant chains including Tender Greens operator TYP Restaurant Group Inc. and Mendocino Farms Inc. as well as wholesale produce distributors West Central Produce Inc. and LA & SF Specialty. In addition to restaurants and distributors, Local Roots provides to corporate clients including Space Exploration Technologies Corp., or SpaceX, where its leafy greens are consumed by the company’s employees.

The privately held company was co-founded in 2013 by Eric Ellestad, Dan Kuenzi, and Matt Vail, and hit the ground running in 2015 when they pitched and got accepted into the L.A. Cleantech Incubator. The program matched them with an executive-in-residence, Jim Winett, founder of Santa Monica-based boutique consulting firm DPAA Group Inc.

“After graduating USC, the founders came to us with their idea and said they needed a space to pilot the actual operations,” Winett said. “They applied, got accepted, and have been with us since.”

The company employs 30 workers, and with the expansion, was set to add 40 to 50 more people to its payroll, Winett said.

He said five days are needed to outfit a container into a TerraFarm, and that the manufacturing and technology processes are done in Vernon by the company’s engineering and manufacturing team, which installs irrigation, electronics, and temperature controls.

A farm operations team made up of botanists, scientists, and other workers then are charged with growing the crops. The vertical farming beds utilize space efficiently, and together with the technology, produce more crops than traditional agriculture.

“Besides growing crops much faster, our produce is more nutrient rich due to a controlled growing environment,” Martin said. “What gives us the competitive edge in this market is that we’re a farm in a box. A box that’s easily shipped anywhere.”

Operations and distributions are centered in the L.A. region for now, but the company has geared up for the East Coast expansion by partnering with Laurel, Md., food distributor Coastal Sunbelt Produce Co. Because TerraFarms are modified cargo containers, they can be moved by truck.

While the boxes should be easy to ship, scaling business operations might be a challenge.

“This model works well for cities in cold climates,” said Craig Lawson, founder of Dallas-based MHT Partners, a middle-market investment bank. “In cities like New York and Chicago, where six to nine months out of the year produce that’s available comes from somewhere else, this could really make a difference.”

Another company in the industry is Boston-based Freight Farms Inc., but unlike Local Roots, which sells produce, Freight Farms sells its technology and freight hardware to grow crops indoors. Built similarly with a vertical hydroponic farming system, the company’s adapted shipping containers sell for $85,000, with maintenance costing an annual $13,000, according to its website.

Some advantages of indoor hydroponic farms such as those of Local Roots are that they reduce water and fossil fuel consumption, free up land from agricultural use, and save on transportation costs, MHT’s Lawson said.

Focusing on the L.A. market, with its proximity to the Central Valley’s agricultural hub, could hinder growth opportunities,

“These companies operate on the fringes of the agricultural market. They’re too small to compete effectively, but there is a place for them,” he said. “At this point, they simply cannot supply the volumes needed, for example, to serve Whole Foods nationwide.”

Lawson said the benefit of cities such as Los Angeles is that they can provide needed talent including engineers and scientists.

The challenges are well-understood with Local Roots’ adviser at the incubator.

“With companies like Local Roots, it takes time to create the technology, to understand what works, (and) understand how sales could be defined while making sure food safety is being met,” Winett said.

He said that the incubator teamed with companies for up to five years for precisely this reason, to accommodate time.

As Local Roots heads east, the business model on operating a TerraFarm in a different city could go two ways.

Martin said the company plans to hire locals and train them to work in the TerraFarms, including instruction at the Vernon headquarters for a few weeks. Winett provided another option.

“They could lease space, ship the containers, and manufacture there, or they could partner with other investors in that particular farm and split financials,” he said.