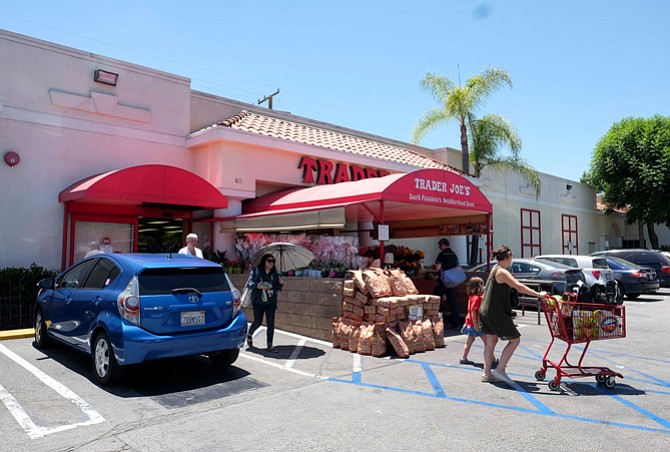 Except, apparently, for Trader Joe’s.

The Monrovia-based chain – which is estimated to have more than $13 billion in annual revenue – has yet to make any of its products available online or for delivery.

The grocer, which like Whole Foods has more than 400 stores, might be able to get away with taking a pass on delivery for now, according to several experts.

“Trader Joe’s is one of the few retailers in the near term, up to three years, which is pretty secure,” said Diana Sheehan, director of retail insights at London-based industry research firm Kantar Retail. “As we look at who is going to be most impacted by Whole Foods, Trader Joe’s is kind of sitting in a little sweet spot.”

Trader Joe’s has created strong customer loyalty with its branded products that often sell for less than national brands, Sheehan said. A reputation for a convenient shopping experience and customer service has won the chain a loyal following.

How that holds up as online shopping and home delivery enters the grocery business remains to be seen.

Less than 2 percent of the $800 billion spent on consumer packaged goods last year came from online sales, according to research firm Tab Analytics Chief Executive Kurt Jetta. But the recent fallout among big apparel retailers caused by a shift to online shopping has made grocers nervous.

“People think even if it’s not big now, I don’t want to miss the boat when it does get big,” Jetta said.

Chains ranging from Whole Foods, Wal-Mart Stores Inc., Kroger Co.’s Ralphs, and City of Commerce-based Smart & Final Stores Inc. offer some form of online delivery, whether through their own company or another party such as San Francisco-based Instacart.

Joe Coulombe opened the first Trader Joe’s store in 1967 in Pasadena. The chain was acquired by Albrecht’s family trust from Coulombe in 1979. The company opened its first East Coast store in 1997 and its first Midwest locations in 2000. By 2013, it had 400 stores across the country.

The chain sold its first Trader Joe’s-branded product in 1972, according to its website. Selling in-house brands benefits both stores and consumers, experts said.

The store is able to generate better profit margins by working directly with a manufacturer or supplier, since it doesn’t have to give a cut of sales to a brand owner. It can also pass the savings to the customer – something Trader Joe’s underlines in its brand messaging.

Successful in-house brands create loyalty with customers because they can only be purchased in that store, according to Phil Lempert, chief executive of Santa Monica industry research firm Supermarket Guru. Customers have become more willing to buy store-branded products since the recession, he said.

Stores, in turn, have been increasing the quality of their in-house products.

“Today a lot of store brands are equal to or higher quality (than the national brands),” Lempert said. “Customers love it because they save money, it’s great quality and, in certain cases, it’s a new food.”

Many grocers are banking not only on in-house branded products, but delivery as well.

“We want to make sure enough customers are interested,” Hirz said.

Starting a delivery service requires capital with no guarantee of return. However, Hirz and other industry executives and analysts believe that stores will eventually have to bring their delivery service in-house.

“If somebody other than your employee (is delivering), you’re losing control of your communication with the customer,” Hirz said. “If I don’t like the tomatoes you picked, I’m going to blame Smart & Final. Consumers don’t care who brought it, it’s who they’re buying it from.”

Whole Foods began partnering with Instacart in 2014, although that relationship might change with its proposed $13.7 billion sale to Amazon, which launched its grocery delivery service, Amazon Fresh, in Seattle in 2007.

A Whole Foods spokeswoman said the company continues to work with Instacart and didn’t have any announcements to make about future plans for online ordering or delivery.

Having Whole Foods’ more than 400 physical locations will make the logistics of delivering meat and produce easier and cheaper for Amazon Fresh, said Supermarket Guru’s Lempert.

Bob Reeves, vice president at industry publication the Shelby Report, said he wouldn’t be surprised if Trader Joe’s is looking into online ordering, given the changing environment. The chain would probably start with having its employees put together orders for customers to pick up at the store, given the company’s preference for keeping tight control over operations.

“Everything I’ve heard and read has been if you’re not at least looking (at online delivery), you’re going to be really falling behind the curve,” Reeves said. “I would think Trader Joe’s is smart enough to see the potential there for them.”