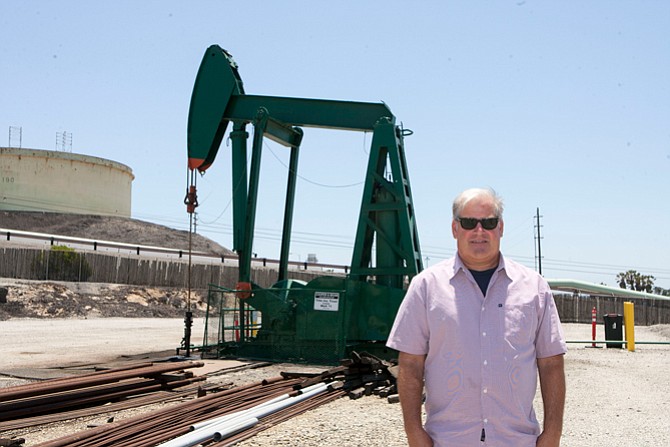 Up or Down?: Jeff Cooper at one of his firm’s oil wells in El Segundo in 2015. Photo by Ringo Chiu.

Along-contentious battle over development of Santa Monica’s downtown is expected to come to a head this week as the City Council is set to consider a long-term development plan for the area.

The plan calls for any new project in the city with a residential component to set aside a certain percentage of units as “deed-restricted” affordable housing, meaning those units must be reserved for low-income residents for long contract periods, typically 55 years.

The percentage of units that must be set aside increases with the overall height of the project until it reaches a maximum of 30 percent for buildings over 70 feet. If that level cannot be reached on site, then it must be achieved on another property in the city owned by the same developer.

This maximum level is far above similar requirements in other cities, which typically range between 10 percent and 20 percent.

“To increase the percent of set-asides, when combined with increased development fees on housing projects that have been proposed in recent years, would have an adverse impact on the number of housing units produced over the next few years,” said Steve Welliver, deputy chief executive of Downtown Santa Monica.

In a study session this month, the council considered a carrot along with this affordable housing set-aside stick: administrative, or routine, city approvals for projects under 75,000 square feet.

But Welliver said that while this would encompass most of the housing projects that come before the city, this offer is not enough to offset the affordable-housing set-aside requirements.

“It doesn’t matter how quickly the projects get approved if they don’t pencil out in the first place,” he said.

Such a move could force the shutdown of many of the 880 or so working oil wells within the city limits as of March, according to Uduak-Joe Ntuk, L.A.’s petroleum administrator.

The City Council last month approved a motion from council President Herb Wesson to study the feasibility of imposing buffer zones to prohibit oil operations near homes, schools, parks, child care facilities and hospitals. Wesson’s motion did not specify how large the buffer zones should be, but directed the city’s newly hired petroleum engineer to study the issue and report back by October with a feasible proposal.

Wesson’s motion is in response to a November 2015 lawsuit against the city from residential groups around oil fields in Baldwin Hills, Wilmington and just south of downtown along with environmental justice groups such as Communities for a Better Environment. These groups said existing drilling and pumping causes disproportionate harm to poor and minority communities and are pushing for the city to adopt a buffer zone of 2,500 feet (nearly one-half mile) between oil operations and sensitive land uses such as homes, schools and health care facilities.

Cooper said a 2,500-foot buffer zone would force his Wilmington company, Cooper & Brain, to shutter most of its wells in the city.

“We have five leases in the city, each with multiple wells,” he said. “If these buffer zones pass, we’ll have to shut down wells in four of those five leases.”

Exactly how many wells would be impacted would depend on how big the buffer zones are. The council recently approved an amending motion from Councilman Mitch Englander to study the economic and job impacts of imposing a buffer zone in which oil activity is banned, raising the possibility of a smaller zone being enacted.

Cooper said the number of jobs associated with operating existing wells is minimal in most cases.

“It’s only when the wells need maintenance that we have to bring in people,” he said.

The bigger concern, he said, is that with the wells shut down, revenue would plunge.

The California Independent Petroleum Association, of which Cooper & Brain is a member, said there’s another concern with shutting down local oil production: The city and region would have to rely more on oil imports.